The geometric crystallography is based on the three fundamental laws:(i) The laws of constancy of interfacial angles: The crystals of a substance can have different shapes depending upon the number and size of the faces but the angle at which the two adjacent faces intersect remains always constant.

(ii) Hauy’s law of rationality of indices: The intercepts of any face of plane of a crystal on suitable crystallographic axes can be expressed by small multiples of three unit distances a, b, c or some simple integral multiple (m, n, p) of these unit distances, i.e., ma: nb: pc or fraction of whole numbers.

(iii) The law of constancy of symmetry: according to this law, all crystals of the same substance possess the same elements of symmetry. A crystal possesses three types of symmetry: 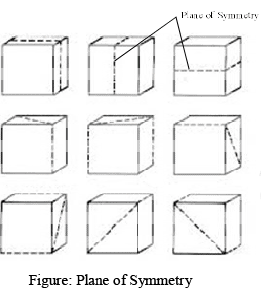 (b) Axis of Symmetry: An axis of symmetry represents a line about which the crystal may be rotated so that is represents the same appearance more than one during the complete revolution.

(c) Centre of Symmetry: A crystal is supposed to have centre of symmetry if every face has an identical face at an equal distance on the opposite side of this corner.

In a cubic crystal

(i) Space lattice or crystal lattice : It may be defined as a regular three dimensional arrangement of identical points in space.The positions which are occupied by atoms, ions or molecules in the crystal lattice are called lattice points or lattice sites.

(ii) Unit Cell : A space lattice can be sub-divided into a number of small cells known as unit cells. It can be defined as the smallest block from which entire crystal can be built up by its translational repetition in three dimensions. Types of Lattice and Types of Unit Cell

(i) Primitive or simple Unit Cells: In a primitive unit cell, the same type of particles are present at the all the corners of the unit cell. (a) Face centred: When atoms are present in all 8-corners and six face centres in a cubic unit cell then this arrangement is known as FCC.

(c) Body Centred: When atoms are present at 8 corners as well as in the body centre in a cubic unit cell then this arrangement is known as BCC.