The document Legendre Special Function (Part - 1)- Mathematical Methods of Physics, UGC - NET Physics Physics Notes | EduRev is a part of the Physics Course Physics for IIT JAM, UGC - NET, CSIR NET.
All you need of Physics at this link: Physics

Legendre polynomials appear in many different mathematical and physical situations. (1) They may originate as solutions of the Legendre ODE which we have already encountered in the separation of variables for Laplace’s equation, Helmholtz’s equation, and similar ODEs in spherical polar coordinates. (2) They enter as a consequence of a Rodrigues’ formula. (3) They arise as a consequence of demanding a complete, orthogonal set of functions over the interval [−1, 1] (Gram–Schmidt orthogonalization . (4) In quantum mechanics they (really the spherical harmonics, represent angular momentum eigenfunctions. (5) They are generated by a generating function. We introduce Legendre polynomials here by way of a generating function.

As with Bessel functions, it is convenient to introduce the Legendre polynomials by means of a generating function, which here appears in a physical context. Consider an electric charge q placed on the z-axis at z = a . As shown in Fig. 12.1, the electrostatic potential of charge q is

We want to express the electrostatic potential in terms of the spherical polar coordinates r and θ (the coordinate ϕ is absent because of symmetry about the z-axis). Using the law of cosines in Fig. 12.1, we obtain Dropping the factor q/4πε0 r and using x and t instead of cos θ and a/ r , respectively, we have

We repeat this limited development in a vector framework later in this section.

In employing a general treatment, we ﬁnd that the binomial expansion of the (2xt − t 2)n factor yields the double series

Returning to the electric charge on the z-axis, we demonstrate the usefulness and power of the generating function by adding a charge −q at z =−a , as shown in Fig. 12.3. The 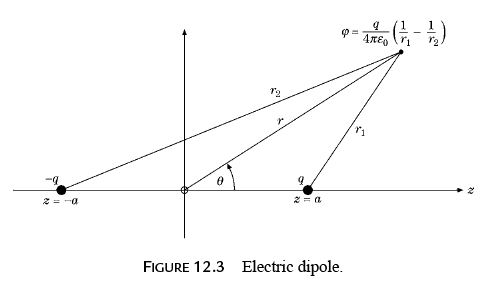 Clearly, the second radical is like the ﬁrst, except that a has been replaced by −a . Then, using Eq. (12.4), we obtain

The ﬁrst term (and dominant term for r ≫ a )is

We consider the electrostatic potential produced by a distributed charge ρ(r2 ):

This expression has already appeared in Sections 1.16 and 9.7. Taking the denominator of the integrand, using ﬁrst the law of cosines and then a binomial expansion, yields (see Fig. 1.42)

The integral is just the total charge. This part of the total potential is an electric monopole.The second term yields

where the integral is the dipole moment whose charge density ρ(r2 ) is weighted by a moment arm r2 . We have an electric dipole potential. For atomic or nuclear states of deﬁnite parity, ρ(r2 ) is an even function and the dipole integral is identically zero.The last two terms, both of order (r2 /r1)2 , may be handled by using Cartesian coordinates:

Rearranging variables to take the x1 components outside the integral yields

This is the electric quadrupole term. We note that the square bracket in the integrand forms a symmetric, zero-trace tensor.

Before leaving multipole ﬁelds, perhaps we should emphasize three points.

It might also be noted that a multipole expansion is actually a decomposition into the irreducible representations of the rotation group.

By substituting Eq. (12.4) into this and rearranging terms, we have

The left-hand side is a power series in t . Since this power series vanishes for all values of t , the coefﬁcient of each power of t is equal to zero; that is, our power series is unique (Section 5.7). These coefﬁcients are found by separating the individual summations and using distinctive summation indices: More information about the behavior of the Legendre polynomials can be obtained if we now differentiate Eq. (12.4) with respect to x . This gives

As before, the coefﬁcient of each power of t is set equal to zero and we obtain

The previous equations, Eqs. (12.22) to (12.27), are all ﬁrst-order ODEs, but with polynomials of two different indices. The price for having all indices alike is a second-order differential equation. Equation (12.28) is Legendre’s ODE. We now see that the polynomials Pn (x ) generated by the power series for (1 − 2xt + t 2 )−1/2 satisfy Legendre’s equation, which, of course, is why they are called Legendre polynomials.In Eq. (12.28) differentiation is with respect to x(x = cos θ). Frequently, we encounter Legendre’s equation expressed in terms of differentiation with respect to θ :

Comparing the two series expansions (uniqueness of power series, Section 5.7), we have

For obtaining these results, we ﬁnd that the generating function is more convenient than the explicit series form, Eq. (12.8).If we take x = 0 in Eq. (12.4), using the binomial expansion

Some of these results are special cases of the parity property of the Legendre polynomials.

Comparing these two series, we have

that is, the polynomial functions are odd or even (with respect to x = 0,θ = π/2) according to whether the index n is odd or even. This is the parity,7 or reﬂection, property that plays such an important role in quantum mechanics. For central forces the index n is a measure of the orbital angular momentum, thus linking parity and orbital angular momentum.This parity property is conﬁrmed by the series solution and for the special values tabulated in Table 12.1. It might also be noted that Eq. (12.37) may be predicted by inspection of Eq. (12.17), the recurrence relation. Speciﬁcally, if Pn−1 (x ) and xPn (x ) are even, then Pn+1 (x ) must be even.

Finally, in addition to these results, our generating function enables us to set an upper limit on |Pn (cos θ)|.Wehave

A fringe beneﬁt of Eq. (12.39b) is that it shows that our Legendre polynomial is a linear combination of cos mθ . This means that the Legendre polynomials form a complete set for any functions that may be expanded by a Fourier cosine series (Section 14.1) over the interval [0,π ].