The document Legendre Special Function (Part - 3) - Mathematical Methods of Physics, UGC - NET Physics Physics Notes | EduRev is a part of the Physics Course Physics for IIT JAM, UGC - NET, CSIR NET.
All you need of Physics at this link: Physics

An example of a Legendre series is provided by the description of the Earth’s gravitational potential U (for exterior points), neglecting azimuthal effects. With

a Legendre series. Artiﬁcial satellite motions have shown that

This is the famous pear-shaped deformation of the Earth. Other coefﬁcients have been computed through n = 20. Note that P1 is omitted because the origin from which r is measured is the Earth’s center of mass ( P1 would represent a displacement).More recent satellite data permit a determination of the longitudinal dependence of the Earth’s gravitational ﬁeld. Such dependence may be described by a Laplace series.

Example 12.3.2 SPHERE IN A UNIFORM FIELD

Laplace’s equation. We select spherical polar coordinates because of the spherical shape of the conductor. (This will simplify the application of the boundary condition at the surface of the conductor.) Separating variables and glancing at Table 9.2, we can write the unknown potential V(r, θ ) in the region outside the sphere as a linear combination of solutions: 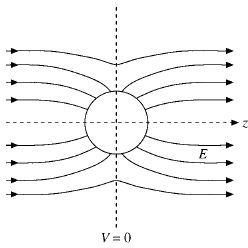 No ϕ -dependence appears because of the axial symmetry of our problem. (The center of the conducting sphere is taken as the origin and the z-axis is oriented parallel to the original uniform ﬁeld.) It might be noted here that n is an integer, because only for integral n is the θ dependence well behaved at cos θ =±1. For nonintegral n the solutions of Legendre’s equation diverge at the ends of the interval [−1, 1], the poles θ = 0,π of the sphere. It is for this same reason that the second solution of Legendre’s equation, Qn , is also excluded.Now we turn to our (Dirichlet) boundary conditions to determine the unknown an and bn of our series solution, Eq. (12.54). If the original, unperturbed electrostatic ﬁeld is E0 , we require, as one boundary condition,

If an ≠ 0 for n> 1, these terms would dominate at large r and the boundary condition (Eq. (12.55)) could not be satisﬁed.As a second boundary condition, we may choose the conducting sphere and the plane θ = π/2 to be at zero potential, which means that Eq. (12.54) now becomes

In order that this may hold for all values of θ , each coefﬁcient of Pn (cos θ) must vanish.12

The electrostatic potential (outside the sphere) is then

ELECTROSTATIC POTENTIAL OF A RING OF CHARGE

Here a is the radius of the ring that is assumed to be in the θ = π/2 plane. There is no ϕ (azimuthal) dependence because of the cylindrical symmetry of the system. The terms with positive exponent in the radial dependence have been rejected because the potential must have an asymptotic behavior,

The problem is to determine the coefﬁcients cn in Eq. (12.63a). This may be done by evaluating ψ(r, θ ) at θ = 0,r = z, and comparing with an independent calculation of the 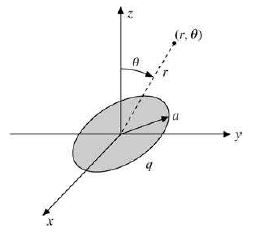 and our electrostatic potential ψ(r, θ ) is given by

The magnetic analog of this problem appears in Example 12.5.3.

For n an integer,

Note the extension of the upper limit. The reader is asked to show in Exercise 12.4.1 that the additional terms [n/2]+ 1to n in the summation contribute nothing. However, the effect of these extra terms is to permit the replacement of the new summation by (x 2 − 1)n (binomial theorem once again) to obtain

This is Rodrigues’ formula. It is useful in proving many of the properties of the Legendre polynomials, such as orthogonality. The Rodrigues deﬁnition is deﬁne the associated Legendre functions.  it is used to identify the orbital angular momentum eigenfunctions.

with the contour enclosing the point t = z

This is the Schlaeﬂi integral. Margenau and Murphy 14 use this to derive the recurrence relations we obtained from the generating function.The Schlaeﬂi integral may readily be shown to satisfy Legendre’s equation by differentiation and direct substitution (Fig. 12.11). We obtain 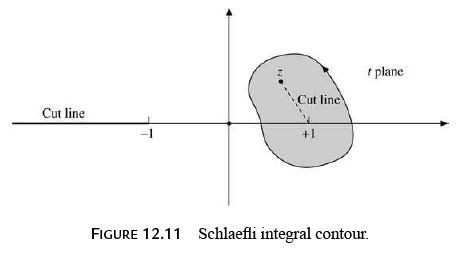