The document Legendre Special Function (Part - 5) - Mathematical Methods of Physics, UGC - NET Physics Physics Notes | EduRev is a part of the Physics Course Physics for IIT JAM, UGC - NET, CSIR NET.
All you need of Physics at this link: Physics

Like the other ODEs of mathematical physics, the associated Legendre equation is likely to pop up quite unexpectedly. As an illustration, consider the magnetic induction ﬁeld B and magnetic vector potential A created by a single circular current loop in the equatorial plane (Fig. 12.12).We know from electromagnetic theory that the contribution of current element Id λ to the magnetic vector potential is where J is the current density. In our problem J is zero everywhere except in the current loop. Therefore, away from the loop,

From the expression for the curl in spherical polar coordinates (Section 2.5), we obtain (Example 2.5.2)

The second equation is the associated Legendre equation (12.80) with m = 1, and we may immediately write

The separation constant n(n + 1), n a nonnegative integer, was chosen to keep this solution well behaved.By trial, letting R(r ) = r α , we ﬁnd that α = n,or −n − 1. The ﬁrst possibility is discarded, for our solution must vanish as r →∞. Hence

Here a is the radius of the current loop.Since Aϕ must be invariant to reﬂection in the equatorial plane, by the symmetry of our problem,

the parity property of

We may also obtain

The Biot–Savart law states that 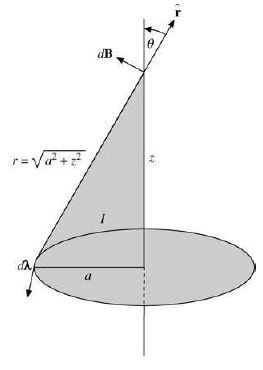 Expanding by the binomial theorem, we obtain

Equivalently, we may write

These ﬁelds may be described in closed form by the use of elliptic integrals. Exercise 5.8.4 is an illustration of this approach. A third possibility is direct integration of Eq. (12.113) by expanding the denominator of the integral for Aϕ in Exercise 5.8.4 as a Legendre polynomial generating function. The current is speciﬁed by Dirac delta functions. These methods have the advantage of yielding the constants cn directly.A comparison of magnetic current loop dipole ﬁelds and ﬁnite electric dipole ﬁelds may be of interest. For the magnetic current loop dipole, the preceding analysis gives

From the ﬁnite electric dipole potential of Section 12.1 we have

The two ﬁelds agree in form as far as the leading term is concerned (r −3 P1 ), and this is the basis for calling them both dipole ﬁelds.As with electric multipoles, it is sometimes convenient to discuss point magnetic multipoles (see Fig. 12.14). For the dipole case, Eqs. (12.140) and (12.141), the point dipole is formed by taking the limit a → 0,I →∞, with Ia2 held constant. With n a unit vector normal to the current loop (positive sense by right-hand rule, Section 1.10), the magnetic moment m is given by m = nIπ a2 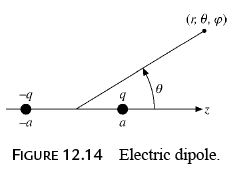 In the separation of variables of (1) Laplace’s equation, (2) Helmholtz’s or the spacedependence of the electromagnetic wave equation, and (3) the Schrödinger wave equation for central force ﬁelds,

the angular dependence, coming entirely from the Laplacian operator, is19

The separated azimuthal equation is

with m integer, which satisfy the orthogonal condition

Notice that it is the product

that is taken and that ∗ is used to indicate the complex conjugate function. This choice is not required, but it is convenient for quantum mechanical calculations. We could have used

and the conditions of orthogonality that form the basis for Fourier series .For applications such as describing the Earth’s gravitational or magnetic ﬁeld, sin mϕ and cos mϕ would be the preferred choice (see Example 12.6.1).In electrostatics and most other physical problems we require m to be an integer in order that

(ϕ ) be a single-valued function of the azimuth angle. In quantum mechanics the question is much more involved: Compare the footnote in Section 9.3.By means of Eq. (12.148),

is orthonormal (orthogonal and normalized) with respect to integration over the azimuth angle ϕ .