The document Legendre Special Function (Part - 6)- Mathematical Methods of Physics, UGC - NET Physics Physics Notes | EduRev is a part of the Physics Course Physics for IIT JAM, UGC - NET, CSIR NET.
All you need of Physics at this link: Physics

which are orthonormal with respect to the polar angle θ .

to obtain functions of two angles (and two indices) that are orthonormal over the spherical surface. These

(θ , ϕ ) are spherical harmonics, of which the ﬁrst few are plotted in Fig. 12.15. The complete orthogonality integral becomes

The extra (−1)m included in the deﬁning equation of

(θ , ϕ ) deserves some comment.It is clearly legitimate, since Eq. (12.144) is linear and homogeneous. It is not necessary, but in moving on to certain quantum mechanical calculations, particularly in the quantum theory of angular momentum (Section 12.7), it is most convenient. The factor (−1)m is a phase factor, often called the Condon–Shortley phase, after the authors of a classic text on atomic spectroscopy. The effect of this (−1)m (Eq. (12.153)) and the (−1)m of Eq. (12.73c) for

(cos θ) is to introduce an alternation of sign among the positive m spherical harmonics. This is shown in Table 12.3.The functions

(θ , ϕ ) acquired the name spherical harmonics ﬁrst because they are deﬁned over the surface of a sphere with θ the polar angle and ϕ the azimuth. The harmonic was included because solutions of Laplace’s equation were called harmonic functions and

(cos,ϕ ) is the angular part of such a solution. 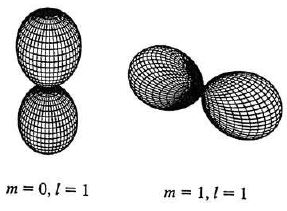 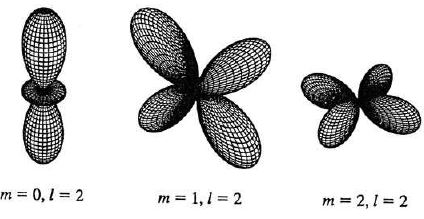 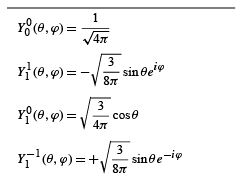 In the framework of quantum mechanics Eq. (12.145) becomes an orbital angular momentum equation and the solution

Part of the importance of spherical harmonics lies in the completeness property, a consequence of the Sturm–Liouville form of Laplace’s equation. This property, in this case, means that any function f(θ , ϕ ) (with sufﬁcient continuity properties) evaluated over the surface of the sphere can be expanded in a uniformly convergent double series of spherical harmonics (Laplace’s series):

If f(θ , ϕ ) is known, the coefﬁcients can be immediately found by the use of the orthogonality integral.

The gravity ﬁelds of the Earth, the Moon, and Mars have been described by a Laplace series with real eigenfunctions:

and we want to show that

The θ integral may be evaluated as a beta function (Exercise 8.4.9) and

This completes our ﬁrst step.

Again, note that the relative phases are set by the ladder operators. L+ and L− operating

Note the characteristic (−1)L phase of ψL,−L relative to ψL,L .This (−1)L enters from

The expression in the curly bracket is identiﬁed as the associated Legendre function (Eq. (12.151), and we have

for negative superscript is given by

which is perhaps most easily proved by vector methods The addition theorem, then, asserts that

In terms of the associated Legendre functions, the addition theorem is We need for our proof only the coefﬁcient

and integrating over the sphere:

Similarly, we expand Pn (cos γ) in terms of spherical harmonics

Note that the subscripts have been dropped from the solid angle element dΩ Since the range of integration is over all solid angles, the choice of polar axis is irrelevant. Then comparing Eqs. (12.180) and (12.183), we see that

all terms with nonzero σ vanishing. Substituting this back into Eq. (12.184), we obtain

Finally, substituting this expression for bnm into the summation, Eq. (12.181) yields Eq. (12.177), thus proving our addition theorem.Those familiar with group theory will ﬁnd a much more elegant proof of Eq. (12.177) by using the rotation group.One application of the addition theorem is in the construction of a Green’s function for the three-dimensional Laplace equation in spherical polar coordinates. If the source is on

Calculate the total electrostatic energy (of repulsion) of the two protons. This calculation is used in accounting for the mass difference in “mirror” nuclei, such as O 15 and N15 .

This is double that required to create a uniformly charged sphere because we have two separate cloud charges interacting, not one charge interacting with itself (with permutation of pairs not considered).

2. Each of the two 1S electrons in helium may be described by a hydrogenic wave function

in the absence of the other electron. Here Z , the atomic number, is 2. The symbol a0 is bthye Bohr radius, h¯ 2 /me2 . Find the mutual potential energy of the two electrons, given

3.  The probability of ﬁnding a 1 S hydrogen electron in a volume element r 2 dr sin θd θd ϕ is

Find the corresponding electrostatic potential. Calculate the potential from

with r1 not on the z-axis. Expand r12 . Apply the Legendre polynomial addition theorem and show that the angular dependence of V(r1 ) drops out.