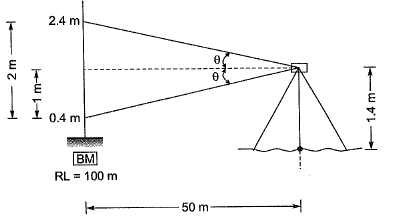 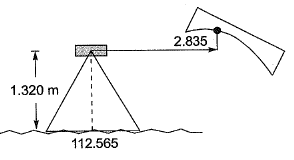 Distance of observer from the lighthouse,

Question 5: The vertical angles subtended by the top of a tower T at two instrument stations set up at P and Q, are shown in the figure. The two stations are in line with the tower and spaced at a distance of 60 m. Readings taken from these two stations on a leveling staff placed at the benchmark (BM = 450.000 m) are also shown in the figure. The reduced level of the top of the tower T (expressed in m) is__________    [2016 : 2 Marks, Set-I

Question 11: A levelling is carried out to establish the Reduced Levels (RL) of point R with respect to the Bench Mark (BM) at P. The staff readings taken are given below:    [2014 : 2 Marks, Set-I] 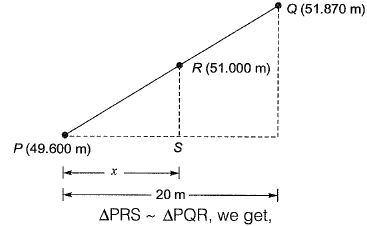 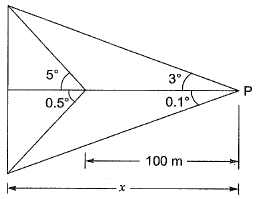 Question 14: Which of the following errors can be eliminated by reciprocal measurements in differential leveling?    [2012 : 1 Mark]
I. Error due to earth’s curvature
II. Error due to atmospheric refraction
(a) Both I and II
(b) I only
(c) II only
(d) Neither I nor II
Answer: (a)
Solution:
Reciprocal levelling eliminates the errors due to
(i) Error in instrument adjustment.
(ii) Combined effect of earth’s curvature and the refraction of the atmosphere.
(iii) Variation in the average refraction.

Question 15: Curvature correction to a staff reading in a differential leveling survey is    [2011 : 1 Mark]
(a) always subtractive
(b) always zero
(c) always additive
(d) dependent on latitude
Answer: (a)