For a function f(x) the limit of the function at a point x = a is the value the function achieves at a point which is very close to x = a.Formally,Let f(x) be a function defined over some interval containing x = a, except that it may not be defined at that point.We say that,

The concept of limit is explained graphically in the following image 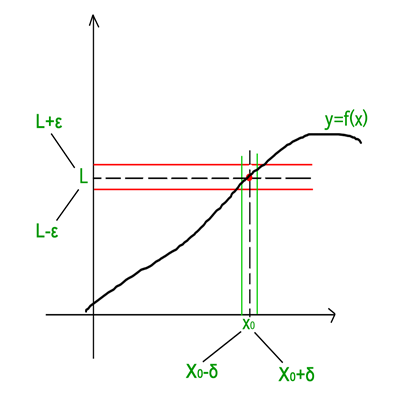 Existence of Limit: The limit of a function f(x) at x = a exists only when its left hand limit and right hand limit exist and are equal and have a finite value i.e.

If the given limit

where f'(x) and g'(x) obtained by differentiating f(x) and g(x).If after differentitating, the form still exists, then the rule can be applied continuously until the form is changed.

Solution: The limit is of the form 0/0, Using L’Hospital Rule and differentiating numerator and denominator

Solution: On multiplying and dividing by kx and re-writing the limit we get –

in the domain if –

f(x) exists and is equal to

.If a function f(x) is continuous at

Functions that are not continuous are said to be discontinuous

Example: For what value of λ is the function defined by

Value of function at x=0

RHL equals value of function at 0-

A function is said to be differentiable if the derivative of the function exists at all points of its domain. For checking the differentiability of a function at point x = c,

must exist.If a function is differentiable at a point, then it is also continuous at that point.