we will talk about special functions of vector fields and about operators which act on vector fields. We begin with the concept of a line integral. We are familiar with normal integrals, which can be regarded as a sum. Let us consider a force acting on a particle in one dimension. The work done in moving the particle from a to b is given by the integral

The particle in this case can move parallel to the x-axis. How do we generalize this to higher dimension? Suppose, the force F acts on a particle taking it along a curve in two or three dimensions.

Work done is given by

where the integral is taken along the path in which the particle moves, the path C can be either an open path or a closed path which terminates at its starting point. 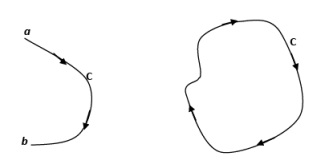 Unlike the case of normal integrals that we have learnt in school, the integral here does not depend only on the end-points but they may depend on the details of the path traversed. There are of course exceptions to this. For instance, the work done by gravitational force or electrostatic force depends only on the end points. Such forces are called “conservative forces”.

is the velocity of the particle at time t.

along three different paths connecting the origin O(0,0) to the point P(2,1). 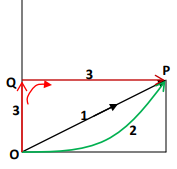 (i) The path 1 is a straight line connecting O with P. The equation to the path is y=x/2

Substituting y=x/2 in the first integral and x=2y in the second, we get,

(ii) The second path is a parabola given by the equation

The calculation proceeds exactly as in case (i) and we have,

Thus the integral reduces to

We can see from the above example that the integral is path dependent.

As a second example, consider a force

along the first quadrant of a circle

taken in anti-clockwise fashion.Look at the sketch of the path. In this quadrant x and y are both positive. You could sketch the vector field and see that vectors at each point is “somewhat” directed upward, implying that the direction of the tangent to the path and the force makes an acute angle. Thus we expect 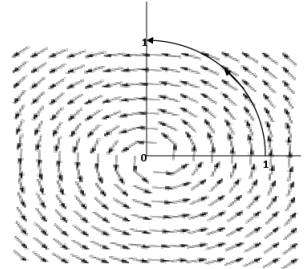 Since the particle moves on a circular path of unit radius , we can parameterize the position by

depends only on its end points, the force is said to be “conservative” In this case, it can be further seen that 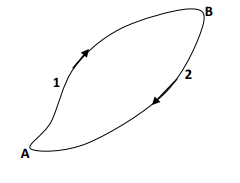 the value of the indefinite integral. In the returning path 2 : we have

Thus over the closed contour, we have

Suppose, we have a force field which can be expressed as a gradient of some scalar function, i.e.

Note that not all forces can be written this way. But in those cases, where it can be so written, we have,

We call such a function as “potential”. (A mathematician would call φ to be a potential, whether we have the negative sign or not; in Physics, the negative gradient of potential is the force).

We define surface integral as an integral of a vector function over a surface. It is given by

the “outward” normal to the surface over which the integral is taken. We will shortly define the meaning of the phrase “outward”. The quantity

is also known as the flux of the vector field through the surface S. 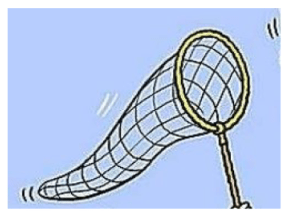 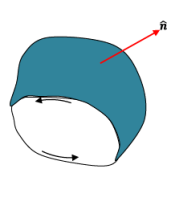 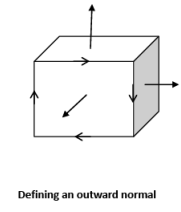 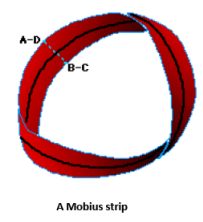 There are one-sided surfaces too for which one cannot define a surface integral. One such example is a Mobius Strip. A Mobius strip is easily constructed by taking a strip of paper and sticking the short edges after giving a half-turn son that the edge on one side is glued to the other side. In such a case one can seamlessly traverse the entire surface without having to cross an edge. Note that in this case the normal at a point cannot be uniquely defined.

Divergence of a Vector : 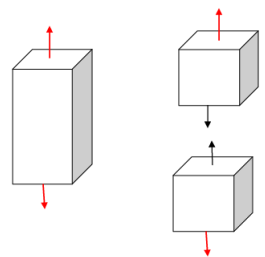 One the left is a rectangular parallelepiped whose outward normals from the top and the bottom faces are shown. If we imagine the parallelepiped to be sliced into two parts, as shown to the right, while there is no change in the outward normals of the top face of the upper half and the bottom face of the lower half. However at the interface where the section is made, the normals are oppositely directed and the contributions to the surface integral from the two surfaces cancel. The same would be true for the other three pairs of faces of the parallelepiped. Thus, if we have a macroscopic volume defined by a bounding surface, we could split the volume into a large number of small volumes and the surface integrals of all volumes which are inside cancel out leaving us with contribution from the outside surface only. Thus the flux over a closed surface can be written as a sum over the surfaces of elemental volumes which make up the total volume.

The quantity in the bracket was defined as the divergence of

the location of the elemental volume. Thus the sum is nothing but an integral of the divergence over the volume of the system. This gives us the Divergence Theorem :

Expression for Divergence in Cartesian Coordinates :

Since divergence is meaningful in the limit of the volume going to zero, we can calculate it by taking an infinitesimally small parallelepiped of dimensions

which is oriented along the axes of the coordinate system. 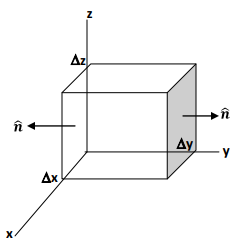 Consider the flux from two opposite faces shown in the figure. Note that the left face is at some value of y and the normal is directed along

direction. Thus the flux from this face is

The opposite face is at y+∆y and the normal to this face is along direction. The flux from the face is

The net outward flux from these two faces can be obtained by subtracting the former expression from the latter. Retaining only first order term in a Taylor series expansion of

Thus the net flux from the two faces is

By symmetry, one can get expressions for the contributions from the other two pairs of faces. The net outward flux from the six faces is thus,

Summing over, we have

However, the left hand side of this equation is identically equal to

Since the volume we have taken in arbitrary, we have

This is the Cartesian expression for the divergence of a vector

We recall that the gradient operator

Using this, one can write

Physically, divergence, as the name suggests, shows how much does the field at a point diverges from its value at that point to the neighbouring region. In the figure below, the vector field

can be seen that the fields spread outward from the origin. A field with negative divergence would instead converge. 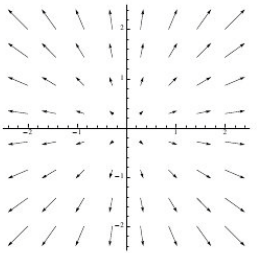 1. Calculate the line integral of the vector field

2. Calculate the line integral of

over a quarter circle in the upper half plane along the path connecting (3,0) to (0,3). What would be the result if the path was taken along the same circular path but in the reverse direction?3. Calculate the line integral of the scalar function

over the right half of the semi-circle

along the counterclockwise direction from (0,-2) to (0,+2).4. A two dimensional force field is given by

Find a potential function for this force field.5. Calculate the flux of a constant vector field

through the curved surface of a hemisphere of radius R whose base is in the x-y plane.6. Calculate the divergence of the position vector

7. Calculate the divergence of

8. Calculate the divergence of

(b) Substituting the parameterized form, we have,

2. The path integral is most conveniently done by parameterizing

The integral is then given by

If the curve is traversed in the opposite direction, the line integral would become +183. Since the path is along a circle of radius 2, we can parameterize by 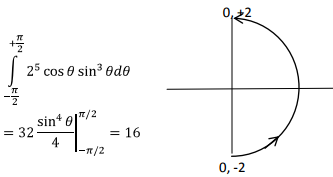 The potential function is therefore given by

where C is an arbitrary constant.5. In this case it is convenient to use the spherical polar coordinates, the surface element is

and it is along the radial direction, which makes an angle θ with the z-axis. Thus 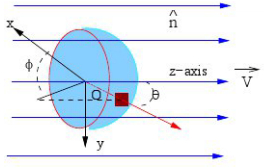 (This is an important relation which we use frequently.)7.

1. Find the line integral of the vector field

where a, b and c are constants. Find the force field. 5. A conservative force field is given by

Calculate the work done by the force in taking a particle from the origin to the point (1,1,2).6. A force field is given by

where r is the distance of the point from the origin. Calculate the divergence at a point other than the origin.

the line integral can be expressed as

(ii) For the second path

3. Just from the fact that line integrals along two different paths give the same result, one cannot conclude that the force is conservative. However, in this particular case, the vector field happens to be conservative. Let the potential function be

Equating components of the force, we get,

Clearly, the function is given by

where C is an arbitrary constant, which can be taken to be zero.The line integral can therefore be written as

4. The components of the force are obtained as follows

5. Since the force is conservative it can be expressed as a gradient of a scalar potential. Writing

We can show that the potential is given by

The work done is

Using chain rule (since the function depends only on the distance r,