In most dynamic problems, particles are subjected to forces that vary with time. We can write this mathematically by saying that the force is a vector valued function of time F(t) . If we express the force as components in a fixed basis {i,j,k} then

where each component of the force is a function of time.

The Linear Impulse exerted by a force during a time interval

The linear impulse is a vector, and can be expressed as components in a basis

If you know the force as a function of time, you can calculate its impulse using simple calculus. For example:

1. For a constant force, with vector value F0, the impulse is

2. For a harmonic force of the form

It is rather rare in practice to have to calculate the impulse of a force from its time variation.

4.2.2 Definition of the linear momentum of a particle

The linear momentum is a vector – its direction is parallel to the velocity of the particle.

4.2.3 Impulse-momentum relations for a single particle

denote the impulse exerted by F on the particleLet

denote the change in linear momentum during the time interval Δt.

The momentum conservation equation can be expressed either in differential or integral form.

This is clearly just a different way of writing Newton’s law F=ma.

This is the integral of Newton’s law of motion with respect to time. 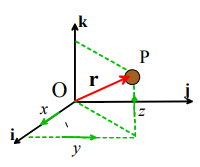 The impulse-momentum relations for a single particle are useful if you need to calculate the change in velocity of an object that is subjected to a prescribed force.

Example 1: Estimate the time that it takes for a Ferrari Testarossa traveling at the RI speed limit to make an emergency stop. (Like many textbook problems this one is totally unrealistic – nobody in a Ferrari is going to travel at the speed limit!)

We can do this calculation using the impulse-momentum relation for a single particle. Assume that the car has mass m, and travels with speed V before the brakes are applied. Let Δt denote the time required to stop.

1. Start by estimating the force acting on the car during an emergency stop. The figure shows a free body diagram for the car as it brakes to a standstill. We assume that the driver brakes hard enough to lock the wheels, so that the car skids over the road. The horizontal friction forces must oppose the sliding, as shown in the picture. F=ma for the car follows as

The vertical component of the equation of motion shows that

The friction law then shows that

2. The force acting on the car is constant, so the impulse that brings the car to a halt is

3. The linear momentum of the car before the brakes are applied is

The linear momentum after the car stops is zero. Therefore,

4. The linear impulse-momentum relation shows that

Example 2: The figure shows a pendulum that swings with frequency f swings per second. Find an expression for the average reaction force at the pivot of a pendulum during one cycle of oscillation. (This seems a totally academic problem – and indeed it is – but the important point is that certain quantities, such as average forces, can often be computed without solving the full equations of motion. These quantities can be extremely useful for checking computer simulations)

Calculation: Consider the pendulum at the extreme limits of its swing, at the start and end of one cycle of oscillation. Note that

1. The velocity of the particle is zero both at the start and end of the cycle. Its change in momentum is therefore zero, and the total impulse exerted on the particle must be zero.

2. The particle is subjected to two forces (i) gravity; and (ii) the reaction force exerted on the particle. During a swing of the pendulum these forces exert impulses

3. The impulse exerted by the gravitational force is

where T = 1 / f is the time for one complete swing of the pendulum.

4. Since the total impulse is zero, it follows that

The MATLAB script below shows how this result can be used to check the program developed in Section ???? to model the swing of a pendulum.

4.2.5 Impulse-momentum relation for a system of particles

Suppose we are interested in calculating the motion of several particles, sketched in the figure. 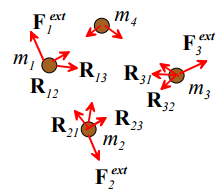 Total external impulse on a system of particles: Each particle in the system can experience forces applied by:

The impulse-momentum equation can be expressed either in differential or integral form, just as for a single particle:

This is the integral of Newton’s law of motion with respect to time.

Conservation of momentum: If no external forces act on a system of particles, their total linear momentum is conserved, i.e. Δp = 0

4.2.6 Examples of applications of momentum conservation for systems of particles

The impulse-momentum equations for systems of particles are particularly useful for (i) analyzing the recoil of a gun; and (ii) analyzing rocket and jet propulsion systems. In both these applications, the internal forces acting between the gun on the projectile, or the motor and propellant, are much larger than any external forces, so the total momentum of the system is conserved.

1. Let mb denote the bullet mass, and let mR denote the mass of the rifle.2. The rifle and bullet are idealized as two particles. Before firing, both are at rest. After firing, the bullet has velocity vb = vi ; the rifle has velocity vR = Vi .3. External forces acting on the system can be neglected, so

Example 2: Derive a formula that can be used to estimate the mass of a handgun required to keep its recoil within acceptable limits.

The preceding example shows that the firearm will recoil with a velocity that depends on the ratio of the mass of the bullet to the firearm. The firearm must be brought to rest by the person holding it.

1. We will idealize a person’s hand holding the gun as a spring, with stiffness k, fixed at one end. The ‘end-point stiffness’ of a human hand has been extensively studied – see, e.g. Shadmehr et al J. Neuroscience, 13 (1) 45 (1993). Typical values of stiffness during quasi-static deflections are of order 0.2 N/mm. During dynamic loading stiffnesses are likely to be larger than this.2. We idealize the handgun and bullet as particles, with mass mb and mg , respectively.

1. The preceding problem shows that the firearm will recoil with velocity V = -mbv / mg2. Energy conservation can be used to calculate the recoil distance. We consider the firearm and the hand holding it a system. At time t=0 it has zero potential energy; and has kinetic energy

At the end of the recoil, the gun is at rest, and the spring is fully compressed – the kinetic energy is zero, and potential energy is 1/2 kd2. Energy conservation gives