Example 2: Two frictionless spheres with radius R have initial velocity vA0 vB0 . At some instant of time, the two particles collide. At the point of collision, the centers of the spheres have position vectors yA yB . The restitution coefficient for the contact is denoted by e. Find a formula for the velocities of the spheres after impact. Hence, deduce an expression for the change in kinetic energy during the impact.

This is a straightforward vector algebra exercise. We have two unknown velocity vectors: vA1 vB1 , and two vector equations – momentum conservation, and the restitution coefficient formula. 1. Note that a unit vector normal to the tangent plane can be calculated from the position vectors of the centers at the impact as

It doesn’t matter whether you choose to take n to point from A to B or the other way around – the formula will work either way.

6. The change in kinetic energy during the collision can be calculated as

Note that the energy change is zero if e=1 (perfectly elastic collisions) and is always negative for e<1 (i.e. the kinetic energy after collision is less than that before collision).

Example 3: This is just a boring example to help illustrate the practical application of the vector formulas in the preceding example. In the figure shown, disk A has a vertical velocity V at time t=0, while disk B is stationary. The two disks both have radius R, have the same mass, and the restitution coefficient between them is e. Gravity can be neglected. Calculate the velocity vector of each disk after collision.

1. Before impact, the velocity vectors are

2. A unit vector parallel to the line joining the two centers is

(to see this, apply Pythagoras theorem to the triangle shown in the figure).

3. The velocities after impact are

Example 4: How to play pool (or snooker, billiards, or your own favorite bar game involving balls, a stick, and a table…). The figure shows a typical problem faced by a pool player – where should the queue ball hit the eight ball to send it into the pocket? This is easily solved – the eight ball is stationary before impact, and after impact has a velocity

Notice that the velocity is parallel to the unit vector n. This vector is parallel to a line connecting the centers of the two balls at the instant of impact. So the correct thing to do is to visualize an imaginary ball just touching the eight ball, in line with the pocket, and aim the queue ball at the imaginary ball. Easy!

The real secret to being a successful pool player is not potting the balls – that part is easy. It is controlling where the queue ball goes after impact. You may have seen experts make a queue ball reverse its direction after an impact (appearing to bounce off the stationary ball); or make the queue ball follow the struck ball after the impact. According to the simple equations developed here, this is impossible – but a pool table is more complicated, because the balls rotate, and are in contact with a table. By giving the queue ball spin, an expert player can move the queue ball around at will. To make the ball rebound, it must be struck low down (below the ‘center of percussion’) to give it a reverse spin; to make it follow the struck ball, it should be struck high up, to make it roll towards the ball to be potted. Giving the ball a sideways spin can make it rebound in a controllable direction laterally as well. And it is even possible to make a queue ball travel in a curved path with the right spin. Never let it be said that you don’t learn useful skills in engineering classes!

Example 5: In this problem we set up a simple MATLAB program that analyzes motion with impacts. The problem to be solved in illustrated in the figure. A square box contains a number of rigid, frictionless circular disks. The disks all have the same mass. At time t=0 the disks are given some random distribution of velocities. The goal of the program is to compute and animate the subsequent motion of the disks, accounting for all collisions. 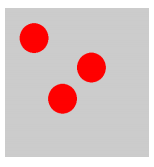 We will model the system by calculating the (x,y) coordinates of each disk. In the following, we will use

to denote the position and velocity of the ith disk.

As always, we turn this into MATLAB form by writing

Collisions with the walls: The collisions occur at the instants when the distance of a disk to the wall is equal to the radius of the disk. Therefore

A collision can be detected by detecting the point when

crosses zero from above.

When a collision occurs, the velocities must be corrected as follows to account for the collision:

1. Collision with the walls at

2. Collision with the walls at

Collisions between particles The collisions occur at the instants when the distance between the centers of any two disks is equal to the diameter of the disk. When a collision occurs between the ith and jth particles, their velocities must be corrected as follows to account for the collision:

To see this, note that

is a unit vector joining the two centers; and  let

denote the velocities of the two particles, and substitute into the general equations in Example 4.

Here is a MATLAB script that implements these calculations. It will produce the animation shown in the picture. You can make various modifications to solve similar problems. The only new feature of this code that has not been discussed before is the ODE solver – it turns out that the standard solver ode45 is not accurate enough for this problem and misses some collisions. The more accurate solver ode113 is used instead.