We ca re-write this as follows:

Start with the definition:

We can expand this out

6.4.5 Calculating the center of mass and inertia of a general rigid body

It is not hard to extend the results for a system of N particles to a general rigid body. We simply regard the body to be made up of an infinite number of vanishingly small particles, and take the limit of the sums as the particle volume goes to zero. The sums all turn into integrals.

3D problems:  For a body with mass density ρ (mass per unit volume) we have that 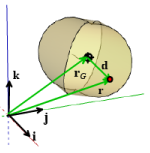 For 2D problems: We know the COM must lie in the i,j plane and we don’t need to calculate the whole matrix.

Example 1: To show how to use these, let’s calculate the total mass, center of mass, and mass moment of inertia of a rectangular prism with faces perpendicular to the i, j,k axes: 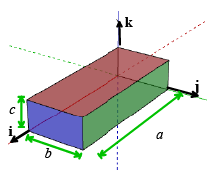 And finally the mass moment of inertia

Example 2: As a second example, let’s calculate the mass moment of inertia of a cylinder with mass density ρ , length L and radius a.  (We know the COM is at the center and we know the total mass so we won’t bother calculating those). We have to do the integral with polar coordinates 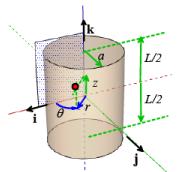 Example 3: Let’s finish up with a 2D example. Find the mass, center of mass, and out of plane mass moment of inertia of the triangle shown in the figure.

The total mass is

The position of the COM is

The 2D mass moment of inertia is

This is all a big pain, and you may be contemplating a life of crime instead of an engineering career.   Fortunately, it is very rare to have to do these sorts of integrals in practice, because all the integrals for common shapes have already been done. You can google most of them. The tables below give a short list of all the objects we will encounter in this course.