Example 2. A radio active material is reduced to 1/3 after 10 years. Find its half life. Answer.

To ﬁnd the half life, we only need the rate r

Example 3. Start an IRA account at age 25. Suppose deposit $2000 at the beginning and $2000 each year after. Interest rate 8% annually, but assume compounded continuously.

Answer. Set up the model: Let S (t) be the amount of money after t years

This is a ﬁrst order linear equation. Solve it by integrating factor

Example 4: A home-buyer can pay $800 per month on mortgage payment. Interest rate is r annually, (but compounded continuously), mortgage term is 20 years. Determine maximum amount this buyer can aﬀord to borrow. Calculate this amount for r = 5% and r = 9% and observe the diﬀerence.

Answer. Set up the model: Let Q(t) be the amount borrowed (principle) after t years

Now we can get the initial amount

We observe that with higher interest rate, one could borrow less.

concentration of salt in the tank at time t =

(1) time t when it overﬂows;(2) amount of salt before overﬂow;(3) the concentration of salt at overﬂow.

Answer.(1). Since the inﬂow rate 4 gal/min is larger than the outﬂow rate 2 gal/min, the tank will be ﬁlled up at tf :

Example 7. A ball with mass 0.5 kg is thrown upward with initial velocity 10 m/sec from the roof of a building 30 meter high. Assume air resistance is |v|/20. Find the max height above ground the ball reaches.

Answer. Let S (t) be the position (m) of the ball at time t sec. Then, the velocity is v(t) = dS/dt, and the acceleration is a = dv/dt. Let upward be the positive direction. We have by Newton’s Law:

At the maximum height, we have v = 0. Let’s ﬁnd out the time T when max height is reached.

So the max height SM is

Solution: Add up twice the max height SM with the height of the building.

Deﬁnition: An autonomous equation is of the form y′ = f (y), where the function f for the derivative depends only on y, not on t.Simplest example: y′ = ry, exponential growth/decay, where solution is y = y0ert .

Question: Is an equilibrium stable or unstable? 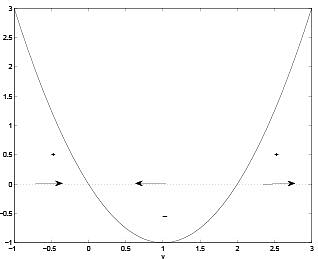 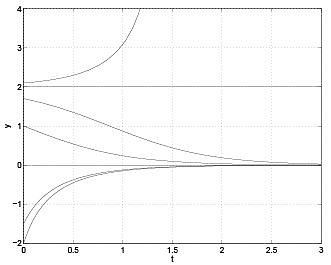 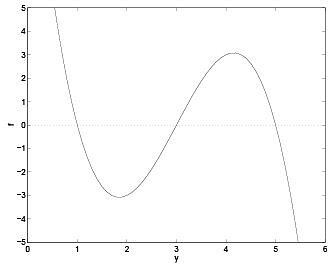 (A). What are the critical points?(B). Are they stable or unstable?(C). Sketch the solutions in the t − y plan, and describe the behavior of y as t → ∞ (as it depends on the initial value y(0).)

(B). To see the stability, we add arrows on the y-axis: 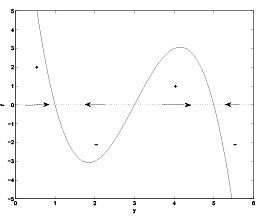 (C). The sketch is given below: 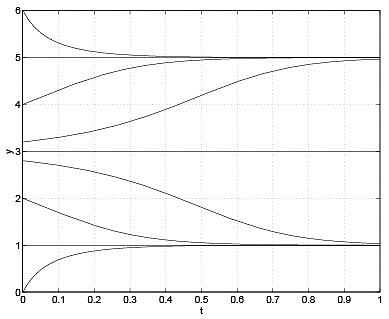 Asymptotic behavior for y as t → ∞ depends on the initial value of y:

Stability: is not only stable or unstable. 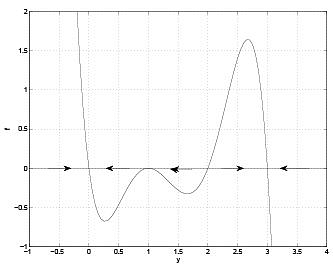 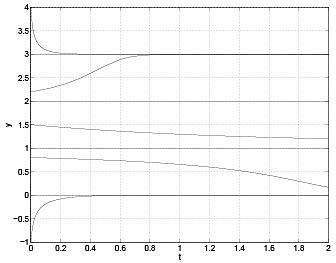 (D). The asymptotic behavior as t → ∞ depends on the initial data.

Application in population dynamics: let y(t) be the population of a species.

This means y′(t) typically does NOT depend on t, and we end up with autonomous equations.

Model 1. The simplest model is the exponential growth, with growth rate r:

If initially there is no life, then it remains that way. Otherwise, if only a very small amount of population exists, then it will grow exponentially.

Of course, this model is not realistic. In natural there is limited natural resource that can support only limited amount of population.

Model 2. The more realistic model is the “logistic equation”:

Model 3. An even more detailed model is the logistic growth with a threshold:

We see that y0 = T work as a threshold. We have

Some populations follow this model, for example, the some ﬁsh population in the ocean. If we over-ﬁshing and make the population below certain threshold, then the ﬁsh will go extinct.