The document Linear Ordinary Differential Equations of First and Second Order (Part - 6), UGC - NET Physics Physics Notes | EduRev is a part of the Physics Course Physics for IIT JAM, UGC - NET, CSIR NET.
All you need of Physics at this link: Physics

In this chapter we study some applications of the IVP

The spring-mass system: See ﬁgure below. 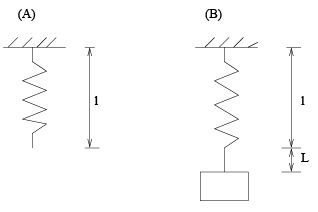 Figure (A): a spring in rest, with length l.

Figure (B): we put a mass m on the spring, and the spring is stretched. We call length L the elongation.

Figure (C): The spring-mass system is set in motion by stretch/squueze it extra, with initial velocity, or with external force.

So: we have mg = kL which give

which gives a way to obtain k by experiment: hang a mass m and measure the elongation L.

Model the motion: Let u(t) be the displacement/position of the mass at time t, assuming the origin u = 0 is at the equilibrium position, and downward is the positive direction.

Total force on the mass:

Since mg = kL, by rearranging the terms, we get

Next we study several cases.

Four terminologies of this motion: frequency, period, amplitude and phase, deﬁned below.

Amplitude and phase: We need to work on this a bit. We can write

A trick to memorize the last term formula: Consider a right triangle, with c1 and c2 as the sides that form the right angle. Then, the amplitude equals to the length of the hypotenuse, and the phase δ is the angle between side c1 and the hypotenuse. Draw a graph and you will see it better.

Problems in this part often come in the form of word problems. We need to learn the skill of extracting information from the text and put them into mathematical terms. Example 1. A mass weighing 10 lb stretches a spring 2 in. We neglect damping. If the mass is displaced an additional 2 in, and is then set in motion with initial upward velocity of 1 ft/sec, determine the position, frequency, period, amplitude and phase of the motion.

Answer.We see this is free harmonic oscillation. The equation is

We need ﬁnd the values for m and k. We have

To ﬁnd k, we see that the elongation is

By Hooke’s law, we have

Put in these values, we get the equation

So the frequency is

and the general solution is

So the position function is

This motion is called damped oscillation. We can re-write it as

Here the term e−λt R is the amplitude, and µ is called the quasi frequency, and the quasi period is

The graph of the solution looks like the one for complex roots with negative real part.

Summary: For all cases, since the real part of the roots are always negative, u will go to zero as t grow. This means, if there is damping, no matter how big or small, the motion will eventually come to a rest.

Example 2. A mass of 1 kg is hanging on a spring with k = 1. The mass is in a medium that exerts a viscous resistance of 6 newton when the mass has a velocity of 48 m/sec. The mass is then further stretched for another 2m, then released from rest. Find the position u(t) of the mass.

So the equation for u is

So the position at any time t is

In this chapter we assume the external force is F (t) = F0 cos ωt. (The case where F (t) = F0 sin ωt is totally similar.) The reason for this particular choice of force will be clear later when we learn Fourier series, i.e., we represent periodic functions with the sum of a family of sin and cos functions.Case 1: With damping.

From discussion is the previous chapter, we know that uH → 0 as t → +∞ for systems with damping. Therefore, this part of the solution is called the transient solution.

The appearance of U is due to the force term F . Therefore it is called the forced response.

We see it is a periodic oscillation for all time t.

Case 2: Without damping. The equation now is

denote the system frequency (i.e., the frequency for the free oscillation). The homogeneous solution is

The form of the particular solution depends on the value of w. We have two cases.

Case 2A: if w ≠ w0 . The particular solution is of the form

Note that if w is close to w0 , then A takes a large value.

We see that the solution consists of the sum of two cosine functions, with diﬀerent frequencies. In order to have a better idea of how the solution looks like, we apply some manipulation.

can be viewed as the varying amplitude, and the second term This is called a beat. (One observes it by hitting a key on a piano that’s not tuned, for example.)