Any LP with only two variables can be solved graphically

(Winston 3.1, p. 49)Since the Giapetto LP has two variables, it may be solved graphically.

The feasible region is the set of all points satisfying the constraints.

To find the optimal solution, a line on which the points have the same z-value is graphed. In a max problem, such a line is called an isoprofit line while in a min problem, this is called the isocost line. (The figure shows the isoprofit lines for z = 60, z = 100, and z = 180).

A constraint is binding (active, tight) if the left-hand and right-hand side of the constraint are equal when the optimal values of the decision variables are substituted into the constraint.

In Giapetto LP, the finishing and carpentry constraints are binding. On the other hand the demand constraint for wooden soldiers is nonbinding since at the optimal solution x1 < 40 (x1 = 20).

Since the Advertisement LP has two variables, it may be solved graphically. 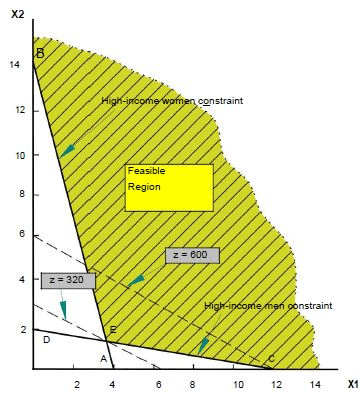 Since Dorian wants to minimize total advertising costs, the optimal solution to the problem is the point in the feasible region with the smallest z value.An isocost line with the smallest z value passes through point E and is the optimal solution at x1 = 3.6 and x2 = 1.4 giving z = 320.Both the high-income women and high-income men constraints are satisfied, both constraints are binding. 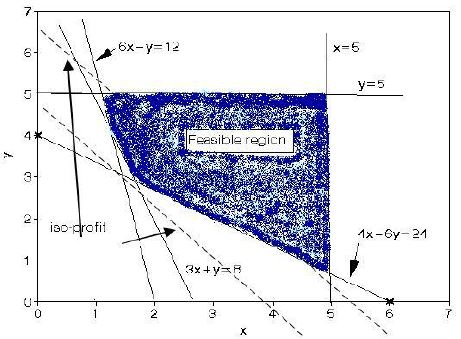 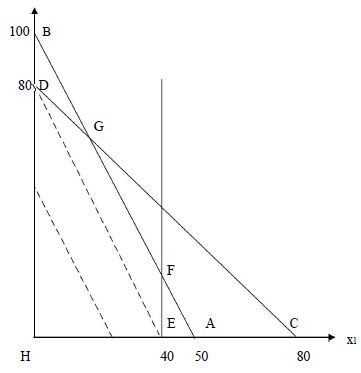 Essentially the simplex algorithm starts at one vertex of the feasible region and moves (at each iteration) to another (adjacent) vertex, improving (or leaving unchanged) the objective function as it does so, until it reaches the vertex corresponding to the optimal LP solution.

(Winston 4.3, p. 134)Dakota Furniture makes desks, tables, and chairs. Each product needs the limited resources of lumber, carpentry and finishing; as described in the table. At most 5 tables can be sold per week. Maximize weekly revenue.

Let x1, x2, x3 be the number of desks, tables and chairs produced.Let the weekly profit be $z. Then, we must

Then use R3’ to eliminate x1 in all the other rows.

Check optimality of current bfs. Repeat steps until an optimal solution is reached

THE CURRENT SOLUTION IS OPTIMAL

Report: Dakota furniture’s optimum weekly profit would be 280$ if they produce 2 desks and 8 chairs.

This was once written as a tableau. (Use tableau format for each operation in all HW and exams!!! )

Second and optimal tableau for the modified problem:

Another optimal tableau for the modified problem:

Therefore the optimal solution is as follows:

Since ratio test fails, the LP under consideration is an unbounded LP.