In this section, we determine how to calculate the angular momentum and kinetic energy of a rigid body, and define two important quantities: (1) the center of mass of a rigid body (which you already know), and (2) the Inertia tensor (matrix) of a rigid body.

To keep things simple, we won’t consider a general rigid body right away. Instead, we will calculate the linear momentum, angular momentum, and kinetic energy of a system of N particles that are connected together by rigid, massless links. Definitions of inertial properties: For this system, we will define

Here, 1 is the identity tensor, and di ⊗di is a tensor with components dixdix , dixdiy , dixdiz , etc (the symbol ⊗ is called the ‘diadic product’ of two vectors).

Formulas for linear and angular momentum and kinetic energy: We will show that:

These are actually general results that hold for all rigid bodies, as long as we use a more general definition of M and IG.

Simplified formulas for two dimensions: For planar problems, diz = 0 (since all the masses are in the plane), and ω = ωzk . In this case, we can use

Example 1: A simple 3D assembly of masses is shown in the figure.

(1) Find the mass moment of inertia.

By symmetry, the COM is at the origin. The inertia tensor is therefore 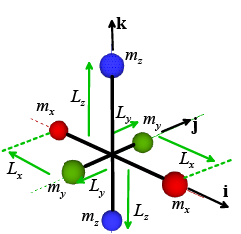 (2) Assume that the COM is stationary (i.e. the assembly rotates about the origin). Find formulas for the angular momentum and kinetic energy of the system, in terms of the angular velocity components ωx ,ωy,ωz

The formula gives the angular momentum

Note that h is a vector. Importantly, h is not generally parallel to the angular velocity vector, as this example shows.

The kinetic energy is

These results help us understand what the formulas are predicting.  Note, for example, that:

Let’s calculate the kinetic energy of the system, but without using the rigid body formulas.  The two blue masses are stationary, so they have no KE. The red and green mass are both moving in a circle about the origin. The circular motion formula says their speed is V = Rωz We can calculate the total kinetic energy using the usual formula

This is the same result we calculated with the rigid body formula.

This explains why the formula for IGzz contains Lx and Ly - the IGzz component keeps track of how much energy or momentum is produced by a rotation about the z axis.   The energy and momentum depend on the distances of the masses from the z axis – which of course depends on Lx and Ly.

Finally, note that we can interpret the two terms in the formulas for momentum and KE as quantifying (separately) the effects of translation and rotation

This helps explain why we can often idealize a system as a particle.  If the rotational term is negligible, the angular momentum and kinetic energy of a rigid body is just the same as that of a particle located at the COM.