When fanout occurs within a logic network, some of the available drive current is directed along the path we are analyzing, and some are directed off that path. Branching effort (b) at the output of a logic gate is defined as-

is the load capacitance along the path and

is the capacitance of connections that lead off the path.If there is no branching in the path the branching effort is unity.

Path effort(F) is defined as -

The path delay D is the sum of the delays of each of the stages of logic in the path.

23.2 Minimizing Delay along a Path

The total delay of the above circuit is given by-

To minimise D , we take the partial derivative of D with respect to equating it to zero we get,

We can generalise this result for N stages as-

In next page, we will this by an example.

Example of Minimizing delay: Consider the path from A to B involving three two input NAND gates as in fig 23.22. The input capacitance of first gate is C and the load capacitance is also C . Find the least delay in this path and how should the transistors be sized to achieve least delay? 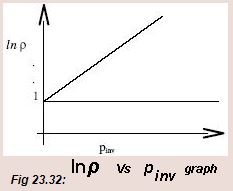