Q.1. Write a note on the theme of the story ‘The Lost Child’.Ans. The story The Lost Child’ is based on child psychology. A child is curious by nature. He is attracted by beautiful things. He wishes to possess everything which looks attractive. However, he takes interest in these things only when he is in the company of his parents. But when he is lost, these things lose their charm for him. In this story, a child goes to a fair with his parents. He is attracted by different things. He wishes to buy balloons, sweets and garlands of gulmohur. He wishes to enjoy a ride in the roundabout. But suddenly he finds that his parents are missing. Now he starts weeping. A kind man tries to console him. He offers to buy him a number of things. But the child goes on weeping. He wants only his parents.Q.2. Give a description of the festival of spring.Ans. The festival of spring was a gay occasion. It was held in a village. A number of people were going to the fair. They were wearing new clothes. Sonic of them were on foot. Others were in bullock carts and on horses. The fair was full of joy. A little boy was also going to the fair along with his parents. He was very happy. There were several shops selling toys, sweets, balloons. etc. At a shop, garlands of gulmohur Bowers were also being sold. The child wanted to buy balloons, sweets and other things. But his parents rejected his demands. There were jugglers also. Near the temple, the crowd was very thick. Some people were enjoying the ride in a roundabout. The child also wanted to have a ride in it. But he lost interest when he found his parents missing. 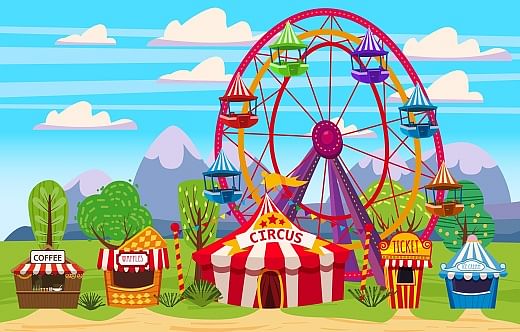 Q.3. What were the things that the boy wanted to possess when he was with his parents?Ans. The child went to a village fair with his parents. He saw several stalls of sweets and toys. At first. he liked a beautiful toy. He asked his parents to buy him that toy. But his father called him away from that shop. Then he tried to catch a butterfly. But he did not succeed. After that, he saw a sweets-seller. He wanted to have some burfi. But his father rejected his demand. Then he saw someone selling garlands of gulmohur flowers. The child wanted to buy a garland. But this demand was also rejected. After that, he wanted to buy a balloon. His father did not buy it for him. Then the child saw a juggler. He wanted to stop and hear the music of his flute. But he feared his father. So he went on. In the end, he wanted to have a ride in a roundabout. But his parents were nowhere to be seen.Q.4. Describe the condition of the child after he had lost his parents at the fair.OrDescribe the changes that occurred in the child in the spring festival.Ans. The child went to the fair along with his parents. He was very happy. He was attracted by the colourful and beautiful things. He saw balloons, flower garlands, toys and sweets. He saw a juggler showing tricks. He also saw a roundabout. But he was sad because his parents rejected all his demands. They did not purchase anything for him. He could not enjoy the juggler’s tricks. Then he wanted to have a ride on the roundabout Ile turned to ask his parents. But he found them missing. He was separated from them. Now a sudden change came in the child. He started crying for his parents. A kind man tried to console him. But the child lost interest in everything. He wanted to join his parents again. He cried, “I want my mother. I want my father!”Q.5. How did the festival of spring bring out the latent joy in human nature?Ans: The festival of spring marks the onset of sunshine after a long spell of cold winter. Everything in nature comes back to life. The bustling insects, worms, trees and fields fill the human heart with joy. The festival of spring, as described in the lesson “The Lost Child”, brings together people from different parts and they express their happiness by thronging the fair in large numbers. They dress up brightly and the colour yellow dominates their attire. Sweets, flowers, swings, games etc. mark this day. People take a break from their daily routine and enjoy the festival with their loved ones. They also remember to express gratitude to God by visiting the shrine. Thus, the latent joy in human nature gets expressed in spring.Q.6. The man who had rescued the child was compassionate and kind. Discuss.OrWhat values of humanity are reflected through the character of the kind man?Ans: The man who had rescued the child had a heart full of goodness. He did not ignore the painful shrieks of the boy calling for his parents. Risking his own safety, he bent down in the crowd to rescue the child from getting trampled. He forgot his own purpose of visiting the shrine did his best to comfort and soothe the scared boy. He talked to him very kindly and inquired about his parents. When he did not get any response from the child, he did not lose patience. Instead, he tried to make him feel at ease b offering him the little things that children love. The man sincerely tried to pacify the child so that he could help him to find his parents. His character thus reflects the human values of kindness, compassion, care and love.

Q.15. You are taken to a fair by your parents. How will you behave with your parents? Explain with reference to the lesson ‘The Lost Child’.Ans. When our parents take us to a fair, we should always try to follow their instructions. We should walk along with them so that we may not get lost in the fair. Besides, we must keep the mobile number and address of our house in the pocket. If we are lost in the fair, we should not eat things or sweets offered by other people because they might be kidnappers and criminals. If we are lost in the fair, we should take help from the police. Our parents have immense love for us. In the fair, we should not pressurise our parents to buy unnecessary things. Our act may humiliate our parents. It is our duty to keep them happy. We should not become a burden on our parents. We should always keep in mind the hard work they do for us.Q.16. What were the things the child wanted to have in the fair when he was with his parents?Ans. The child went to the fair along with his parents. He was very happy. In the fair, he saw several stalls of sweets and toys. He saw some beautiful toys and asked his parents to buy them. But his parents tried to distract the child from the shop. Then, he saw a sweet-seller. He was selling Rasogulla, Gulab-Jamun, Burfi, etc. The child liked Burfi very much and wanted to buy some. Again his parents returned his demand and went ahead. Then the child saw some men selling garlands of gulmohur flowers. He wanted to buy some garland but his demand was rejected by his parents again. He also saw some men selling colourful balloons and wanted to buy some. Again his parents did not show interest in his demands and rejected it. Moreover, the child wanted to hear music played on the flute by the snake charmer, but he was not allowed to stay long near the snake charmer. His desire to go to the roundabout was also rejected.

The document Long Answer Questions:- The Lost Child Notes | Study English Class 9 - Class 9 is a part of the Class 9 Course English Class 9.
All you need of Class 9 at this link: Class 9
Join Course