The document Long Answer Questions- Development Class 10 Notes | EduRev is a part of the Class 10 Course Social Studies (SST) Class 10.
All you need of Class 10 at this link: Class 10

Q.1. Why do we use averages? Are there any limitations to their use? Illustrate with your own example related to development.Ans. We use averages for comparisons across different classes.
Limitations of Using Averages: Averages calculate only the mean availability but they hide the disparities in the process. This is the main limitation of using averages.
Let us consider two countries A and B, each having 4 citizens.
Education Level of Citizens

From the above example, we observe that in country B all citizens have the graduate level of education. There are fewer disparities in this country whereas in country A, half the citizens are illiterate or of primary education level whereas the other half are doctorates or post graduates. Therefore, even though average education level of both A and B is graduate level, yet there are great disparities between them.

Q.2. List a few example of environmental degradation that you may have observed around you.Ans. Due to advancement in information technology and communication, the whole world has become one. Further, free movement of investment over the greater part of the world has made national economies less and less national. They have become interlinked, interdependent national economies. 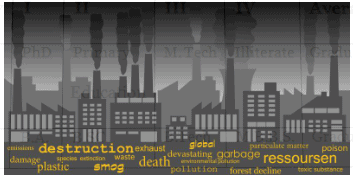 For example: environmental degradation due to the overuse or misuse of the resources such as fresh water will have a direct impact on the whole world. Evidences suggest that water hunger would be one of the worst problems in near future. Similarly, overuse of mineral wealth.

Example: petrol in one part of the world, has a deep impact on the other parts of the world also.Generation of domestic, urban and industrial pollution is taking place today beyond the earth’s capacity to absorb. Hence, we can say that environmental degradation is not just a national issue. While non-renewable energy resources get exhausted after years of use. These resources cannot be replenished. Crude oil and coal are examples of non-renewable energy resources.Present resources of energy in India: crude oil, coal, thermal power plants are present resources of energy in India which would run out of stock in 43 years. We have to find out alternative energy resources which do not cause any damage to the environment.Q.4. What does Human Development Index (HDI) indicate? By whom HDI is prepared?Ans. Human Development Index (HDI): It makes rating of all countries on a scale of 0 to 1. 0 indicates lowest human development and 1 indicates highest human development. Two important points about HDI are-
(1) It measures relative and not absolute level of human development.
(2) The main emphasis of HDI is on goals, i.e. longevity, knowledge and standard of living (expressed in real per capita income).

Who Prepares HDI: United Nations Development Programme (UNDP) has been preparing the HDI since 1990.

Q.8. How does the National Development of a country depend on the availability of public facilities?
Ans. To bring equality in the National economy, public facilities are provided by the government especially for those sections of society who are unable to make use of the facilities provided by the private sector. The Government, at times in collaboration with private firms, provides basic health care, education etc at subsidized rates or even free of cost. The Public Distribution System in India provides food grains and other essential items to the people living below the poverty line. Health care which includes free immunization and hospitalization at a subsidized cost are also provided by the Government for the weaker sections of the society for their development.