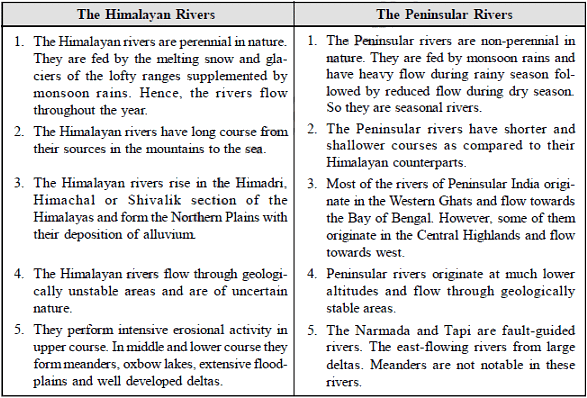 Q.2. Write a note on the Indus Drainage System.Ans. The Indus is one of the longest rivers of the world. The river Indus rises in Tibet, near lake Mansarovar. Flowing west, it enters India in the Ladakh district of Jammu and Kashmir. A spectacular gorge formed by the Indus marks this part. Several tributaries – the Zaskar, the Nabra, the Shyok and the Hunza – join the Indus in the Kashmir region. The Indus flows through Baltistan and Gilgit and emerges from the mountains at Attock. The tributaries of the Indus – the Jhelum, the Chenab, the Ravi, the Beas and the Satluj – flow partly through Kashmir and Himachal Pradesh and mainly through Punjab. They join together to enter the Indus near Mithankot in Pakistan. The Indus then flows southwards and eventually reaches the Arabian Sea, east of Karachi. The Indus has a total length of 2900 km. The Indus plain has a very gentle slope. A little over onethird of the Indus basin lies in India in the states of Jammu and Kashmir, Himachal Pradesh and Punjab. Major part of its basin lies in Pakistan.

Q.3. Write a note on the Brahmaputra Drainage System. OR Name any two major river systems of the Himalayan region. Describe any one in detail.

Ans. The Brahmaputra is one of the longest rivers of the world, but most of its course lies outside India. The river Brahmaputra rises in Tibet east of the Mansarovar lake. The river flows eastwards parallel to the Himalayas in its upper course. It is known as Tsangpo in Tibet. Here it carries smaller volume of water and less silt as it is a cold and dry area. The river takes a ‘U’-turn bend at Namcha Barwa (7757 m) and enters India in Arunachal Pradesh through a gorge. In Arunachal Pradesh, it is known as Dihang. Here it is joined by the Dibang, the Lohit, the Kenula and many other tributaries. The volume of the river increases and it is known as the Brahmaputra in Assam.The region receives heavy rainfall during the monsoon which increases the volume of water and silt content of the river. Devastating floods are caused by the river in Assam and Bangladesh every year during the rainy season. The deposition of the silt in the riverbed due to the heavy load, leads to the formation of braided channels intervened by riverine islands. The Brahmaputra has a braided channel in its entire length in Assam. Many riverine islands like the Majuli, the world’s largest riverine island, are formed in between the channels. The Brahmaputra is known as Jamuna in Bangladesh. Here it is joined by the Ganga, known here as Padma. Together they form the Ganga-Brahmaputra Delta known as Sunderbans, and discharge into the Bay of Bengal.

Q.4. Write a note on the Ganga Drainage System. (Important)

Ans. The Ganga is the longest and the most important river system of India. It has a total length of over 2500 km. Nearly the entire river basin of the Ganga lies in India with a part of its lower course and delta in Bangladesh.The headwaters of the Ganga is called the ‘Bhagirathi’. It is fed by the Gangotri Glacier. It is joined by the Alaknanda at Devaprayag in Uttarakhand. At Haridwar, the Ganga emerges from the mountains and enters the plains. The Ganga is joined by a large number of tributaries. The Yamuna, a right-bank tributary of the Ganga, rises from the Yamunotri Glacier, flows parallel to the Ganga and joins it at Allahabad. The Ghaghra, the Gandak, the Kosi and the Sarda are the left-bank tributaries of the Ganga. The other right bank tributaries of the Ganga – the Chambal, the Betwa and the Son – come from the Peninsular uplands. The Ganga and its tributaries form a major portion of the northern plains. On account of water availability and fertile soil, it is the most important agricultural region of India. The Ganga develops large meanders in the plains. The Ganga flows eastwards with the increased volume up to Farakka in West Bengal. The river bifurcates here. Its distributary, the Bhagirathi-Hooghly, flows through the deltaic plains to the Bay of Bengal.The mainstream flows southwards into Bangladesh. Here it is known as Padma. It is joined by the Brahmaputra. Further downstream it is known as Meghna. Together they form the Ganga- Brahmaputra Delta, also known as Sunderbans delta. It is the world’s largest and fastest growing delta.

Q.5. Write a note on the east-flowing and the west-flowing rivers of Peninsular India.

Ans. The Peninsular Plateau of India is marked by a large number of east-flowing rivers and a few west-flowing rivers. Most of the major rivers of Peninsular India such as the Mahanadi, the Godavari, the Krishna and the Kaveri and their tributaries flow eastwards. They rise from the Western Ghats, the highlands of the Deccan Plateau, flow towards east and drain into the Bay of Bengal. Only two big rivers, the Narmada and the Tapi, with long courses flow westwards in Peninsular Plateau region. They rise from the Satpura range and Amarkantak hills, flow westwards through faults and drain into the Arabian Sea. The coastal plains between Western Ghats and the Arabian Sea are very narrow. Hence, the west-flowing coastal rivers are short and swift flowing. The Sabarmati, Mahi, Bharathpuzha and Periyar are the west-flowing rivers. The Sabarmati and the Mahi originate in the Central highlands and flow into the Arabian Sea. The Western Ghats form the main water divide in Peninsular India. The east-flowing rivers have wide basins. They have dendritic drainage pattern with many tributaries joining them. They form large deltas at their mouths.The west-flowing rivers flow between highlands and have elongated courses. They have trellis and rectangular drainage pattern. They flow through rift valleys and are fault guided rivers. They form estuaries at their mouths. The west-flowing rivers do not form deltas.

Q.6. Why are rivers important for a country's economy?

Ans. Rivers are the lifelines of a nation. Rivers have been of fundamental importance in the settlement and progress of man throughout the human history. The rivers form broad, fertile alluvial plains that have been the cradle of human civilisation. Water from the river is a basic natural resource, essential for various human activities. They provide water for domestic use. Rivers provide water for irrigation that helps to develop agriculture in the surrounding area.The fertile soil of the riverine plain, abundant supply of water and the flat land provides opportunities for the development of agriculture. In an agricultural country like India, rivers play a major role in shaping the country’s economy. Rivers supply water for industrial use. Rivers provide for a cheap mode of transportation, inland navigation.Hydro-electricity harnessed from river water supplies power to our industries, to our homes and to our agricultural fields. Integrated water management of rivers through River Valley Projects by building dams provide hydro-electricity, water for irrigation, inland navigation, fishing, recreation etc.Hence, rivers are of prime importance in the flourishing of a country’s economy.

Ans. In highland areas small streams flowing from different directions and join together to form the main river which ultimately drains into some large waterbody, a lake, sea or ocean. The main river is joined by a number of tributaries along its course. The streams within a drainage basin form certain patterns called drainage patterns.

Q.8. Write a note about the causes and remedy of river pollution. OR Explain any three reasons for pollution of rivers in India. OR Discuss any three causes of water pollution.

Ans. Pollution of rivers by discharge of untreated sewage water and industrial effluents is a big menance. They are changing the life-giving rivers into toxic streams. Dumping of garbage into the streams is another cause of river pollution.

The growing domestic, municipal, industrial and agricultural demand for water from the rivers due to ever increasing population has led to over-exploitation of water. Excessive, uncontrolled use of this main source of freshwater has reduced their volume and has affected the quality of water. Increasing urbanisation and industrialisation has increased the pollution level of many rivers to such a level that the self-cleansing capacity of the river cannot cope up with it. Concern over rising pollution in our rivers led to the launching of various river action plans like the Ganga Action Plan, the Yamuna Action Plan, etc., to clean the rivers. The National River Conservation Plan (NRCP) covers 152 towns along 27 interstate rivers in 16 states. Pollution abatement works are being taken up in 57 towns under it. A million litres of sewage is targeted to be intercepted, diverted and treated.