The document Long Answer Questions Chapter 4 - Agriculture, Class 10, SST (Geography) | EduRev Notes is a part of the Class 10 Course Social Studies (SST) Class 10.
All you need of Class 10 at this link: Class 10

Ans. The main points of distinction between the two main types of farming – Intensive Subsistence Farming and Commercial farming prevalent in various parts of India and the world are as follows :

Ans. Cotton, jute, hemp and natural silk are the major fibre crops of India. The geographical conditions required for the growth of cotton, the most important fibre crop of India are as follows : Cotton is a kharif crop and requires high temperature, light rainfall or irrigation, 210 frost free days and bright sunshine for its growth. Rainfall at the time of bursting of the cotton balls is harmful as it spoils the cotton balls. Cotton grows well in drier parts of the black soil area of the Deccan plateau. Black soil is also known as black cotton soil due to the fact that it is ideal for growth of cotton. The major cotton-producing states of India are Maharashtra, Gujarat, Madhya Pradesh, Karnataka, Andhra Pradesh, Tamil Nadu, Punjab, Haryana and Uttar Pradesh. Jute is the second most important fibre crop of India. West Bengal, especially the Hooghly basin of the state, is the leading jute-producing area of the country on account of the well drained fertile soil of the floodplain which are renewed every year. Also the climatic condition with high temperature during time of growth and sufficient availability of water have favoured jute cultivation in the Hooghly basin of West Bengal. Bihar, Assam, Orissa and Meghalaya are the other jute-producing states.

Q.3. What are the main cropping seasons of India? Distinguish between them.

Ans. There are three cropping seasons in India–rabi, kharif and zaid.

Q.4. Look at the picture carefully and answer the questions that follow : 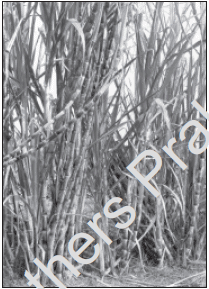 (i) Name the crop shown in the picture. (ii) State the climatic conditions required for cultivation of this crop. (iii) Name the two major regions growing this crop.

(i) The crop shown in the picture is sugarcane.(ii) The climatic conditions required for its growth : Sugarcane is a crop of tropical and sub-tropical climate. It grows well in hot and humid climate with temperature of 21oC to 270C and an annual rainfall between 75 cm and 100 cm. Frost is injurious for the plant. Heavy rainfall before ripening decreases sucrose content. Hence, frost-free weather, short, cool, dry winter during ripening and harvesting is favourable.(iii) Uttar Pradesh and Maharashtra are two major producing states of sugarcane.

Ans. Four features of intensive subsistence farming in India are as follows :(i) This type of farming is practised in areas of high population pressure on land, mainly in the east and south of India. Intensive Subsistence farming is dominant in West Bengal, Assam, Orissa, Bihar, eastern Uttar Pradesh and coastal areas of Andhra Pradesh, Tamil Nadu and Kerala. There is tremendous pressure on agricultural land in these areas.(ii) Farmer and his family produce mainly cereal crops like rice and millets for subsistence and for local market.(iii) Ceiling on ownership:- Now there is limit on the ownership a farmer can have land in his name.

Q.5. Compare the geographical conditions, required of the two major cereal crops in India, rice and wheat. Give one major area where they are grown. [2010, 2011 (T-1)]

Q.7. What geographical conditions are required for the cultivation of sugarcane? Name two largest producing states of sugarcane. [2010 (T-1)]

Ans. Geographical requirement for sugarcane :-(a) Climate :- It is a tropical crop and it grows well in hot and humid climate with a temperatures of 210C to 270C.(b) Rainfall :- Annual rainfall should be between 75 cm and 100 cm, irrigation needed where low rainfall takes place.(c) Soil :- Alluvial soil is best suited Region :- Uttar Pradesh and Maharashtra are the two largest producers of sugarcane.

Q.10. Name the four fibre crops grown in India. Which one of them is not obtained directly from the crops? What is the name given to the process involved in its production? [2010 (T-1)]

Natural silk fibre is not obtained directly from the crop. It is called sericulture. In this silk is obtained from cocoons of the silkworm fed on green leaves specially mulberry.

Ans. Due to the following reasons food production is declining :—(i) There has been a gradual shift from cultivation of food crops to cultivation of cash crops, fruits vegetable, etc.(ii) Area under food crop has reduced due to rapid urbanisation.(iii) More areas are being demanded for housing, setting up industries. etc.(iv) The productivity of land is also declining due to heavy use of chemical fertilizers and pesticides. The Green Revolution has outlived its utility.(v) Natural calamities like drought and flood have become frequent. Monsoon is still vital for food production.

Ans. Wheat is the main food crop in north and north-western part of the country.The geographical conditions favourable for growth of wheat are as follows :(1) Temperature : Wheat is a rabi crop and requires a cool growing season. Average temperature should be between 10�C to 15�C at the time of sowing, but higher temperatures and bright sunshine is required at the time of harvesting for proper ripening of grains.(2) Rainfall : Wheat requires moderate rainfall of 50 to 75 cm annually, evenly distributed over the growing season. A little winter rain before ripening helps in increasing the yield.(3) Soil. Deep alluvial clayey soils of Northern Plains and even black soil of Deccan are suited for growth of wheat. There are two important wheat-growing zones in the country – the Ganga-Satluj plains in the north-west and black soil region of the Deccan. Punjab, Haryana, Uttar Pradesh, Bihar, Rajasthan and parts of Madhya Pradesh are the major wheat growing states.

Q.13. Write four geographical requirements each for the growth of tea and sugarcane. (2010)

Ans. Tea is the main beverage crop of India. Four geographical requirements for its growth are :(a) The tea plant grows best in tropical and sub tropical climate.(b) Tea bushes require warm and moist and frost free climate with temperature between 20oC to 300C and annual rainfall of 150 to 250 cm.(c) Frequent showers evenly distributed over the year ensure continuous growth of tender leaves.(d) Deep, fertile, well-drained soil, rich in humus and organic matter are ideal for its growth. Hence, gently rolling topography in uplands is favourable for its cultivation.

Four geographical conditions required for growth of sugarcane are :(a) Sugarcane grows best in tropical and sub-tropical climate. It is an annual crop requiring a year for maturing.(b) It grows well in hot and humid climate with temperature of 210C to 270C and an annual rainfall between 75 cm and 100 cm.(c) Frost is injurious for the plant and rainfall before ripening decreases sucrose content. Hence, frost free weather short, cool, dry winter during ripening and harvesting is favourable.(d) It can grow on a variety of soil, but clayey alluvial soil of Northern Plains and black soil in south are ideal for its growth.

Ans. Four characteristics of commerical farming in India are as follows.(i) Crops are grown on a large scale in large farms or plantations for commerical purposes and for export to other countries.(ii) It is capital intensive farming requiring high application of modern inputs.(iii) Modern inputs like high yielding variety (HYV) seeds, chemical fertilisers, insecticides and pesticides are used to obtain higher productivity. Irrigation is applied to meet water requirement.(iv) Commerical farming is mainly practised in states with less population pressure like. Punjab, Haryana, Gujarat, Maharashtra and western Uttar Pradesh. Wheat, cotton, sugarcane, oilseeds, tea and coffee are grown under commercial farming.

Q.15. Look at the given picture carefully and answer the questions that follow : (2009) 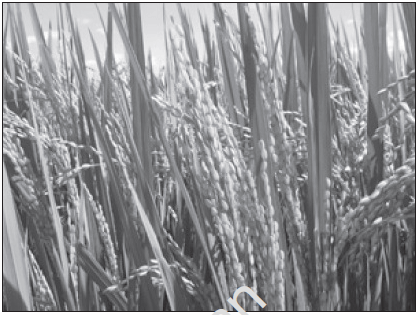 (i) Name the crop shown in the picture. (ii) State the climatic conditions required for cultivation of this crop. (iii) Name the two major regions growing this crop.

(i) The crop shown in the picture is paddy or rice, the main staple foodgrain for majority of the people in India.(ii) The climatic conditions required for cultivation of rice are as follows :

Rice is a Kharif crop and requires hot and humid climate for cultivation. Temperature above 250C, and high humidity with annual rainfall above 100 cm are favourable for cultivation of rice.

Rice requires sufficient rainfall and flooded fields during the earlier part of its growing season in June-July. It needs plenty of sunshine.

(a) The Ganga-Brahmaputra Plains of north and northeastern India comprising West Bengal, Assam, Bihar and eastern Uttar Pradesh.(b) Coastal areas and deltaic regions with alluvial soil like Orissa, and parts of Andhra Pradesh and Tamil Nadu.

(a) Rubber is an important industrial raw material. Tyres, tubes of vehicles and other rubber products are made from natural rubber.(b) It is an equatorial crop but grown under special conditions. It is also grown in tropical and sub-tropical areas. It requires moist and humid climate with rainfall of more than 200 cm and temperature above 250C.(c) Rubber is mainly grown in Kerala and Tamil Nadu.

(i) Rice is a Kharif crop requiring high temperature (above 250C).(ii) Rice requires high humidity with annual rainfall above 100 cm. In the regions of less rainfall, it grows with the help of irrigation.(iii) Rice is sown/planted with the onset of monsoon and harvested in November-December.(iv) It is mainly grown in Bihar, Bengal, Orissa, eastern U.P., Assam, Tamil Nadu.

(i) This type of farming is practised on small patches of land with the help of primitive tools like hoe, dao and digging sticks and family labour.(ii) This type of farming depends upon Monsoons, natural fertility of soil and environmental suitability.(iii) It is a ‘slash and burn’ agriculture. Farmers clear a patch of land and produce crops for their sustenance.(iv) When the soil fertility decreases, farmers shift to new area, clear forest by burning and again sow crops.