The document Long Answer Questions - Chemical Effects of Electric Current Notes | EduRev is a part of the Class 8 Course Science Class 8.
All you need of Class 8 at this link: Class 8

Q1: Explain the process of electroplating, along with its advantages and uses.

Ans: One of the most common applications of the chemical effect of electric current is electroplating. In this process, there exists a liquid, usually called the electrolyte, through which current passes. Two electrodes, connected to the terminals of a battery with a switch in between, are inserted in the liquid. The electrode that is connected to the positive terminal of the battery is called the “anode,” and the other connected to the negative terminal is called the “cathode”. Electroplating is done in industries to have an anti-reactive coating on the parts of machines so that they do not react with the raw material, to have an anti-corrosive coating for the machines so that they do not get corroded, and a heat-resistivecoating for parts like boilers to resist the heat produced by the machinery.The process of electroplating is used for plating parts of vehicles with nickel and chromium, which protects them from corrosion.

Q2: A tester is used to check the conduction of electricity through two liquids, labelled A and B. It is found that the bulb of the tester glows brightly for liquid A while it glows very dimly for liquid B. You would conclude that

Ans: Liquid A is a better conductor than liquid B.Q3: Most liquids that conduct electricity are solutions of acid, bases and salt . Justify the statement.

Ans: Good conductor, because When we add kitchen salt (NaCl) to the distilled water the salt dissolves in water by splitting its molecules in ions:

Poor conductor, because Sugar, as a non-electrolyte substance, does not produce ions when dissolved in water. A solution of sugar contains molecules of sucrose,but no ions. The absence of ions in a sugar aqueous solution makes it a non-electricity conductor fluid.Q4: Prepare a tester to test conduction based on magnetic effect of the electricity.Ans. Take the tray of a discarded matchbox. Wrap an electric wire a few times around the tray. Place a small compass needle inside it. Now connect one free end of the wire to the terminal of a battery. Leave the other end free. Take another piece of wire and connect it to the terminal of battery. Join the free ends of two wires momentarily. The compass needle should show deflection. The tester with two free ends of wire is ready. 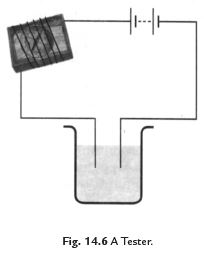 Q5: Complete the following table and classify the liquids by using tester.

Q6: What are the two methods of testing an insulator or a conductor?Ans. The following two methods are used to test the conduction.(i) We use an electric lamp to test conductivity. An electric lamp is attached to the electric circuit. If the substance allows the current to pass through it, the bulb will start glowing. Otherwise the bulb will not glow. This method does not work when current is very small. In such cases magnetic compass is used.(ii) A magnetic tester is used to test conductivity when current is allowed to pass through  it, it creates a magnetic field and the compass shows deflection. The deflection of compass shows that the current is passing through circuit (See Fig. 14.6). 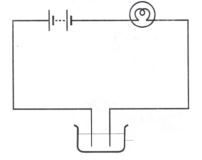 Fig. 14.7 Methods to show the testing of conductivity of lemon juice.

Q7: What do you mean by electroplating? How does it take place?Ans. The process of coating a desired metal on other metal surface by using electric current is called electroplating.A metal plate and the substance to be coated are dipped in a current conducting solution with conducting wires. The object to be coated is attached to the negative terminal. When electric current is passed through the solution, the compounds of the conducting solution start breaking. The free metallic particles get deposited on the object at negative terminal of the battery. In this way we can get a coating of desired metal on any object by preparing suitable conducting solution and by using suitable electrodes. 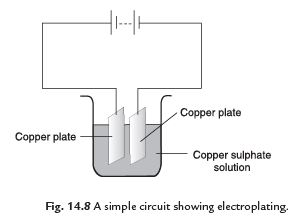 (i) It is used to coat a desired metal on other objects.(ii) It protects the metals from corrosion.(iii) It also prevents the metallic surfaces from rusting.(iv) Some cheap and dull metals are coated with costly and shiny metals.(v) It can make more reactive metals like iron, less reactive.(vi) Coating of chromium on metals give lustre to objects.