Ques 1. What were the differences between Pinochet’s rule in Chile and the communist rule in Poland? [V. Important]Ans. Pinochet, an Army General supported by the government of USA, led a coup in Chile in 1973 against Allende’s popularly elected government. With this, dictatorship was established in Chile. Pinochet’s government tortured and killed several of those who supported Allende and wanted to restore democracy there.In Poland, a Communist Party called Polish United Workers’ Party ruled in 1980. No other political party was allowed to function. The government of Poland was supported by Soviet Union. But when the movement led by Lech Walesa spread, demanding the workers’ rights, the government had to give in. Finally, an agreement was signed between Walesa and the Polish government in April 1989 for free elections. In 1990, elections were held in which more than one party could contest.

Ques 2. Write about one of the major demands made in the 19th century in the struggle for democracy.Ans. In the 19th century, struggles for democracy often centred round political equality, freedom and justice. There was a demand for right to vote for every adult citizen. Many European countries that were becoming more democratic did not initially allow all people to vote. In some countries, only people owning property had the right to vote. Often women did not have the right to vote. Those struggling for democracy wanted “universal suffrage”, i.e. voting right for all adults – men or women, rich or poor, white or black. 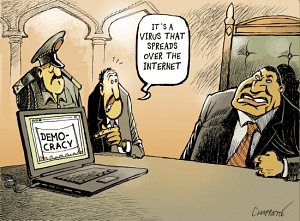 Ques 3. What were the major changes that took place in India’s neighborhood in the 1990s and 2005? [V. Important]Ans. In the 1990s, Pakistan and Bangladesh made a transition from army rule to democracy. In Nepal the king gave up many of his powers to become a constitutional monarch to be guided by elected leaders. However, these changes were not permanent. In 1999, General Musharraf set up army rule in Pakistan. In 2005, the new king of Nepal dismissed the elected government and took back political freedoms that people had won in the previous decade.

Ques 4. State how democracy was crushed in Myanmar after the elections were held there in 1990.Ans. 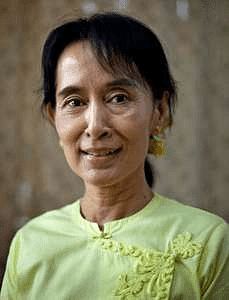 Fig. Aung San Sui Kyi In 1990, in Myanmar, elections were held for the first time after almost 28 years. The National League for Democracy led by Aung San Sui Kyi won the election. But the military leaders of Myanmar refused to step down and did not recognise the election results. The military put the elected pro-democracy leaders, including Sui Kyi, under house arrest. Anyone caught publicly airing views or issuing statements critical of the regime could be sentenced up to twenty years in prison.

Ques 5. In the absence of a single world government, what kind of limits are put on what the governments do?Ans. There is no single world government, but there are many institutions in the world that perform partially the functions of such a government. These organisations cannot command countries and citizens in a way a government can, but they do make rules that put limits on what governments can do. The United Nations has evolved many conventions on these questions that are now binding on the countries of the world. The UN Security Council is responsible for maintaining peace and security among countries. The International Monetary Fund lends money to governments when they need it. The World Bank also gives loans to the governments.