The document Long Answer Questions Chapter 1 - Power Sharing, Class 10, SST | EduRev Notes is a part of the Class 10 Course Social Studies (SST) Class 10.
All you need of Class 10 at this link: Class 10

Q.1. Describe the different forms of power-sharing in modern democracies. Give an example of each of these. (CBSE Sample Paper)Ans. In modern democracies, power-sharing arrangements can take many forms(i) Among different organs of government: Power is shared among the legislature, executive and judiciary. This is called horizontal distribution of power because it allows the three organs of government placed at the same level to exercise different powers. Each organ checks the others, no organ can exercise unlimited power.(ii) Among governments at different levels: Here power is shared among governments at the provincial or regional level and a general government for the entire country, called Federal Government. In India, we call it Central or Union Government.
In India, the government at the provincial level is called State government. The Constitution clearly lays down powers of different levels of government. The third level of government is called municipality and panchayat. This arrangement is called vertical division of power.(iii) Among different social groups: Power may also be shared among different social groups, such as the religious and linguistic groups. For example, Community Government in Belgium. In India, weaker sections of society have ‘reserved constituencies’ in Assemblies and the Parliament. They also have ‘reserved seats’ in government jobs.(iv) Among political parties, pressure groups and movements: Power is shared among various political parties that represent different ideologies and social groups. Interest groups such as those of traders, businessmen, industrialists, farmers and individual workers also have shared in governmental power, either through participation in governmental committees or bringing influence on the decision making process.

Q.2. Bring out the main features of the Belgian model of governance.Ans. Between 1970 and 1993, the Belgian leaders amended their Constitution four times to work out a consensus. 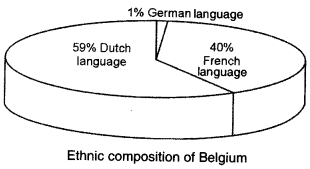 Q.3. What do we learn from the story of Sri Lanka? Should India follow the Belgian model? (HOTS)Ans. The distrust between the two communities in Sri Lanka turned into widespread conflict. It soon turned into a civil war in which thousands of people of both the communities were killed, thousands became homeless and were forced to leave the country as refugees.
The story of Sri Lanka teaches us the lesson of sharing power among various communities. Various prudential and moral reasons for power sharing are desirable to ensure stability of the political order, unity and integrity of the country. The rule of majority community leads to conflict in society and eventually to a bloody civil war.
India should not follow the Belgian model as it is not suitable for a large multilingual and multi-religious country like ours. Our Constitution is best suited and most appropriate for Indian society and culture. Belgian model of power sharing is quite complicated and not suitable for India.

Q.4. What could ethnic problem lead to in Belgium and Sri Lanka?Ans. In both countries, there could be tension and conflict between different ethnic groups. In Belgium, the majority community of Dutch-speaking people could try to dominate the French and German-speaking people.
This could lead to conflict— especially in Brussels. Brussels could have been partitioned as the ratio of the Dutch and the French were different from the rest of the country. In Sri Lanka, the Sinhalese people, already in the majority, could try further to dominate the Tamil speaking people. It could even lead to war.
Thus, size and population do not matter. Ethnic divisions, if not handled with patience and common sense, can lead to a civil war, division of the country and conflict between communities.

Q.5. Give instances to show how Sri Lanka has imposed ‘majoritarianism’.Ans.
(i) Sri Lanka had a 74% population of Sinhala-speaking people. From the day it became independent, it imposed the majority rule in Sri Lanka.(ii) It changed the Constitution to make Sinhala the official language, Buddhism the official religion.(iii) It totally ignored Tamil culture, language, and gave preference in jobs to Sinhala-speaking people.(iv) It also gave no importance to Hinduism, Islam or Christianity.

Q.6. In what way was the Belgian method better?Ans. The Belgians gave equal importance to all the ethnic groups. At the Centre, there were both French and Dutch ministers, and their number was equal.
(i) The Centre and the states had equal and independent powers.
(ii) If new laws were made, they had to be passed with the majority in both ethnic groups-voting for them.
(iii) A separate government was elected for the city of Brussels.
(iv) A third community government was elected, comprising Dutch, French and German speaking people. It looked after the language, culture and educational issues.
(v) In short, the Belgians wisely tried to avoid all tensions and conflicts by accommodating the needs and wishes of all ethnic groups.

Q.7. Here are some examples of power-sharing. Which of the four types of power-sharing do these represent? Who is sharing power with whom?(i) The Bombay High Court ordered the Maharashtra state government to immediately take action and improve the living conditions for the 2,000-odd children at seven children’s homes in Maharashtra.(ii) The government of Ontario state in Canada has agreed to a land claim settlement with the aboriginal community. The Minister responsible for Native Affairs announced that the government will work with aboriginal people in a spirit of mutual respect and cooperation.(iii) Russia’s two influential political parties, The Union of Right Forces and the Liberal Yabloko Movement, agreed to unite their organizations into a strong right-wing coalition. They propose to have a common list of candidates in the next parliamentary elections.(iv) The finance ministers of various states in Nigeria got together and demanded that the federal government declare its sources of income. They also wanted to know the formula by which the revenue is distributed among various state governments.Ans:
(i) The state judiciary is exercising its power to control the state executive by asking the state government to look into the conditions of its 2,000 children’s home. There is no power-sharing between different organs of government.(ii) The aboriginal people have exercised pressure on the government to agree to their land claims. So power is shared by a social group with the government.(iii) In this case, two political parties have formed a coalition and are sharing power with mutual consent.(iv) In the last example, power is being shared at different government levels, the state or regional groups are demanding the government at the Centre to declare its sources of income, so that they can have a larger share of finances for their respective states.

Q.8. How has the idea of power-sharing changed with time?Ans. For a long time, it was believed that all the power of a government must reside in one person or group of persons located at one place. It was felt that dispensing powers would delay in decision-making and their enforcement.
But these notions have changed with the emergence of democracy. One basic principle of democracy is that people are the source of all political power. In a good democratic government, due respect is given to diverse groups and views that exist in a society. Everyone has a voice in the shaping of public policies.

Q.9. One of the ways in which power-sharing is done in Indian democracy is by providing reservations for the Scheduled Castes, Scheduled Tribes, and OBCs. Now the Muslims and Christian Dalits are asking for reservations. Is this demand of power sharing justified? (HOTS)Ans. Initially, when the reservation of seats was done for the socially weaker sections, the intention of the Constitution was to bring an end to the alienation being faced by the so-called weaker communities, and now it has become more of a political gimmick, a means to collect votes, than to genuinely work for their development. It may encourage more and more communities to demand reservations, thus leading to widening of social division. This is a sort of negative power-sharing in my opinion. Some more positive steps need to be taken to encourage power-sharing as early as possible.