Following were the reason for the French Revolution: 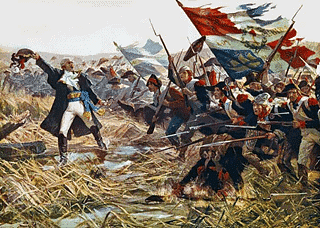 Q52. ‘The French philosophers of the 18th century greatly influenced the people and it led to the French Revolution.’ Comment on this statement. 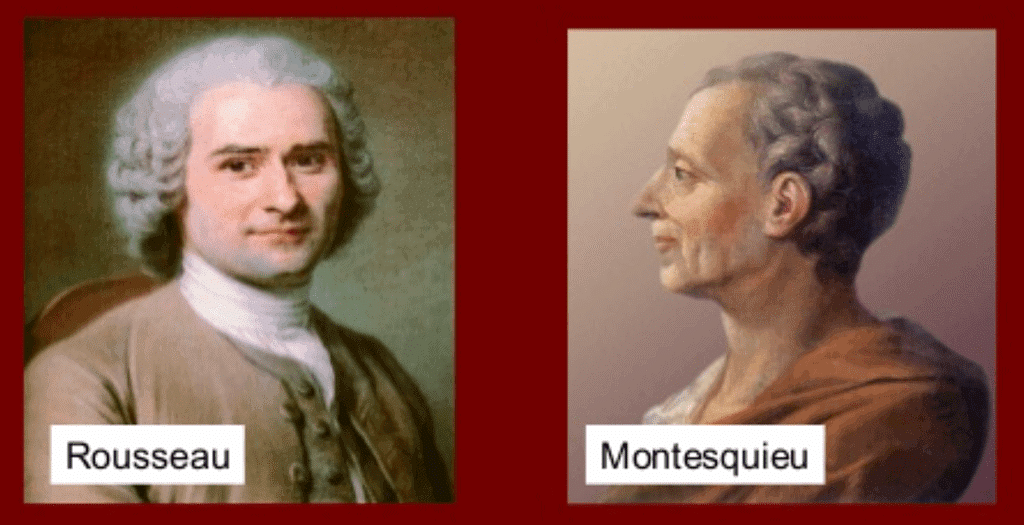 Q53. Explain the importance of the following events on the course of the French Revolution:(a) Storming of the Bastille(b) March on the Versailles by the women of Paris(c) The passing of the Civil Constitution of the clergy

(a) On July 14, 1789, a mob of Paris stormed the fortress – the prison of Bastille – considered a symbol of oppression and despotism. The Swiss guards were killed and prisoners set free. The mob stole arms and ammunition. To this day, France celebrates Bastille Day’ on 14th July every year. 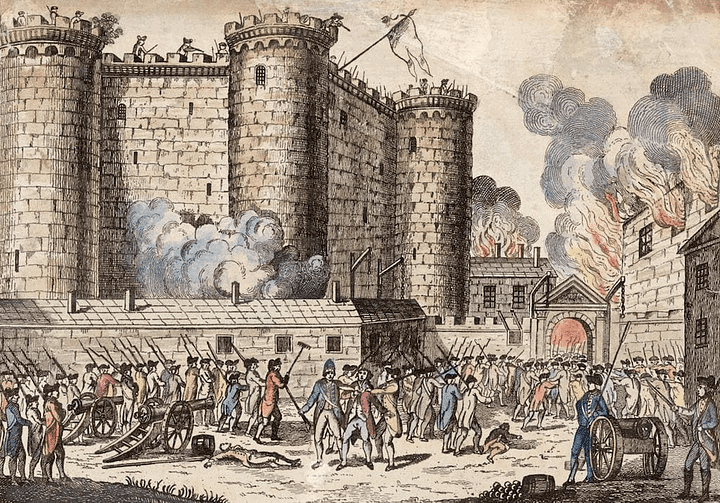 The Storming of the Bastille

(b) The march on the Versailles by women of Paris signified the fact that women became active participants in the French Revolution. They gained equal status in society. The slogans of liberty, equality, and fraternity became true.(c) In 1790, the Civil Constitution nationalised the church. The clergy or group of persons who enjoyed special powers in the church were also forced to relinquish power. Tithes were abolished and lands owned by the church were confiscated.

Q54. Describe the Reign of Terror and the role played by Robespierre in it. 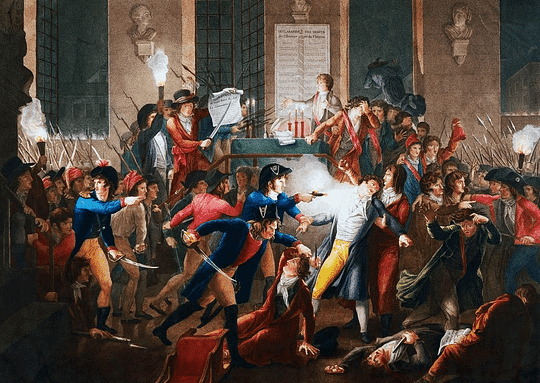 Q55. What is the legacy left by the French Revolution?

Q56. What did the following symbols convey in the Declaration of Rights?(i) The broken chain(ii) The bundle of rods or fasces(iii) The eye within a triangle radiating light(iv) Sceptre(v) Snake biting its tail to form a ring(vi) Red Phrygian cap(vii) Blue-White-Red(viii) The winged woman(ix) The law tablet

(i) The broken chain: Chains were used to fetter slaves. A broken chain stands for the act of becoming free.(ii) The bundle of rods or fasces: One rod can be easily broken, but not an entire bundle. Strength lies in unity.(iii) The eye within a triangle radiating light: The all-seeing eye stands for knowledge. The rays of the sun will drive away from the clouds of ignorance.(iv) Sceptre: Symbol of royal power.(v) Snake biting its tail to form a ring: Symbol of eternity. A ring has neither beginning nor end.(vi) Red Phrygian cap: Cap is worn by a slave upon becoming free.(vii) Blue-white-red: The national colours of France.(viii) The winged woman: Personification of the law.(ix) The law tablet: The law is the same for all, and all are equal before it.

Q57. Who were the Jacobins? What was their contribution to the French Revolution?

Q58. Discuss the participation of women in political clubs, their activities, and demands.

(i) In order to discuss and voice their interests, women started their own political clubs and newspapers. About sixty women’s clubs came up in different French cities. 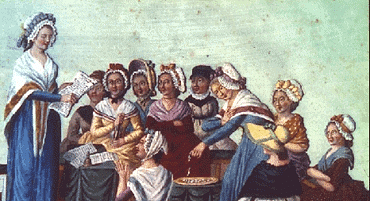 (ii) The Society of Revolutionary and Republican Women was the most famous of them. One of their main demands was that women should be given the same political rights as men.
(iii) Women were disappointed that the constitution of 1791 reduced them to passive citizens. They demanded the right to vote, to be elected to the Assembly and to hold political office.(iv) Women’s struggle for equal political rights, however, continued. It was finally in 1946 that women in France won the right to vote.

Q59. “The revolutionary government took it upon themselves to pass laws that would translate the ideals of liberty and equality into everyday practice.”Discuss this statement with special emphasis on the abolition of censorship.

Q60. Describe any four causes for the fall of the Jacobin government in France.

(i) The Jacobin government in France was based on extreme measures. The period from 1793- 1794 is referred to as the reign of terror. Robespierre followed a policy of severe control and punishment. This led to chaos and resentment among the people.(ii) The Jacobin government issued laws placing a maximum ceiling on wages and prices. Meat and bread were rationed. Peasants were forced to transport their grain to the cities and sell it at prices fixed by the government. This led to a feeling of resentment against the Jacobins. Peasants began opposing them.(iii) Robespierre’s government ordered shutting down of churches and converting church buildings into barricades or offices. Thus the clergy turned against the Jacobin regime and hastened its fall.(iv) Robespierre pursued his policies so relentlessly that even his supporters turned against him. They began to demand moderation and a middle path. Finally, he himself was tried by a court in July 1794, arrested, and guillotined.

Q61. State the election process of the National Assembly in France.

Q62. What changes were brought in France after the fall of Robespierre's government? How did it lead to the rise of Napoleon Bonaparte?

(i) The fall of Robespierre's government led to the seizure of power by the wealthier middle classes.(ii) A new constitution was introduced, which denied the vote to non-propertied sections of society.(iii) It provided for two elected legislative councils. These then appointed a Directory, an executive made up of five members.(iv) This was to check the concentration of powers in the hands of a one-man executive which could turn tyrannical.(v) But the directors often clashed with the legislative councils, who then sought to dismiss them. The political instability of the Directory paved the way for the rise of the military dictator Napoleon Bonaparte.

Q63. Describe the importance of the Declaration of the Right of Man in France. 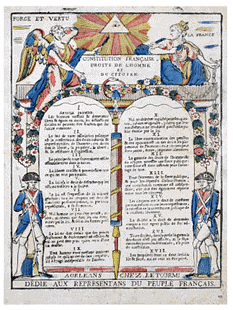 Declaration of the Rights of Man

Q64. What landmark decisions were taken by the National Assembly led by the Third Estate on 4th August 1789?