The document Long Answer Type Questions - Is Matter Around Us Pure Class 9 Notes | EduRev is a part of the Class 9 Course Science Class 9.
All you need of Class 9 at this link: Class 9 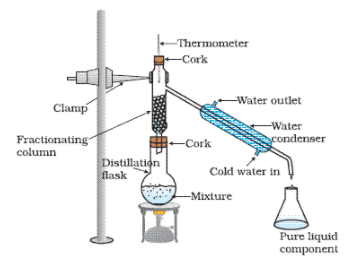 Q2. (a) Under which category of mixtures will you classify alloys and why? Answer: When constituent particles of a combination of two or more element or compound retains their properties, then it is called mixture. In an alloy the constituent particles, hence alloys are classified as mixture. For example; steel is an alloy of carbon and iron.

Q3. Iron filings and sulphur were mixed together and divided into two parts, ‘A’ and ‘B’. Part ‘A’ was heated strongly while Part ‘B’ was not heated. Dilute hydrochloric acid was added to both the Parts and evolution of gas was seen in both the cases. How will you identify the gases evolved?Answer:

(i) What would you expect to see, if the ink contains three different coloured components?

Answer: Streaks of different colours can be seen on the filter paper.

(ii) Name the technique used by the child.  Answer: Chromatography

(iii) Suggest one more application of this technique.Answer: Chromatography is used for separating pigments from colours, for the separation drugs from blood sample, etc.

(a) Explain why the milk sample was illuminated. Name the phenomenon involved.  Answer: Since, milk is a colloid and when light scattered from the particles of colloids, it is illuminated, thus light was illuminated when passed through the milk. This is known as Tyndall Effect.

(b) Same results were not observed with a salt solution. Explain.  Answer: For scattering of light the size of particles should be large enough. Since the particles of solution are not enough to scattered the beam of light, hence same result were not observed.

(c) Can you suggest two more solutions which would show the same effect as shown by the milk solution?  Answer: Soap bubbles and fog are the colloids, hence same effect, i.e. scattering of light is shown by these. This is known as Tyndall effect.

(d) Change in the colour of black tea on adding lemon juice to it. Answer: In this change a new substance is formed, hence it is a Chemical change.

(b) Compare the mass % of the two solutions.  Answer: We know;

Q8. You are provided with a mixture containing sand, iron filings, ammonium chloride and sodium chloride. Describe the procedures you would use to separate these constituents from the mixture? Answer: The given mixture can be separated using the following process.

Vapourisation: By the process vaporization, the liquid so obtained is vapouried and crystals of ammonium chloride can be obtained.

Hence, by using the methods of magnetic separation, sublimation, filteration and vapourisation and crystallization the component of given mixture of sand, iron fillings, ammonium chloride and sodium chloride can be separated.

Q9. Arun has prepared 0.01% (by mass) solution of sodium chloride in water. Which of the following correctly represents the composition of the solutions?