The document Long Answers - Force and Pressure, Science, Class 8 Class 8 Notes | EduRev is a part of the Class 8 Course Class 8 Science by VP Classes.
All you need of Class 8 at this link: Class 8

Q. 1. Read Table and try to identify the action as push or pull.
Ans. Table Identifying Actions as Push or Pull

Q. 2. Read Table and complete it.
Ans. Table  Studying the Effect of Force on Objects

(iii) Force of gravity: Earth pulls every thing or body towards it. The force of attraction exerted by earth on any object is called force of gravity. This is also a non-contact force as it acts from a distance.

Q. 6. What is force? Name different types of forces.
Ans. A push or pull on an object is called force. There are following types of forces:
(i) Muscular force
(ii) Force of friction
(iii) Magnetic force
(iv) Force of gravity
(v) Electrostatic force

Q. 7. Prove that the force of friction depends on the nature of the two surfaces in contact.
Ans. Collect the following things: A thick book, nylon cloth, gunny cloth, plastic sheet, jute cloth and sand paper. Place the book on each of the materials and slide it on the floor one by one. If your book slides off the plastic sheet or nylon cloth, use adhesive tape to stick it firmly on the surface of the book.
You will observe that the different materials offer different amounts of resistances to sliding.
This activity shows that force of friction depends on the nature of the surface in contact. In general, smooth surface offers lesser friction than rough surface. Q. 9. Show that a liquid exerts pressure on the walls of the container.
Ans. Take a plastic bottle. Fix a cylindrical glass tube a few cm long near its bottom. You can do so by slightly heating one end of the glass tube and then quickly inserting it near the bottom of the bottle. Make sure that water does not leak from the joint. If there is any leakage seal it with molten wax. Cover the mouth of the glass tube with a thin rubber sheet. Now fill the bottle up to half with water. We observe the bulge in the rubber sheet. Pour some more water in the bottle. We see more bulge in rubber sheet. This activity indicates that water exerts pressure on the walls of the container. 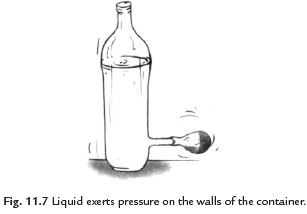 Q . 11. What experiment was performed to prove that air has pressure?
Ans. Otto von Guericke, a German Scientist invented a pump in 17th century to extract air out of a vessel. He demonstrated the force of the air pressure. He joined two hollow metallic hemispheres of 51 cm diameter each and pumped air out of them. Then he employed eight horses on each hemisphere to pull them apart. So great is the force of air pressure that the hemispheres could not be pulled apart.