The document Long Answers - Is Matter Around Us Pure, Science, Class 9 Class 9 Notes | EduRev is a part of the Class 9 Course Class 9 Science by VP Classes.
All you need of Class 9 at this link: Class 9

Q2. State the different types of colloids with examples.
Ans. Different colloids are formed due to different dispersed phase and dispersing medium.

Q6. A metal coin is dissolved in acid. Chromatography is used to test the solution formed. The diagram given shows the chromatogram obtained.
(a) Describe how the chromatogram would be set up in the laboratory.
(b) What can you say about the composition of the coin?
(c) Which of the spots (A, B or C ) is more soluble in the Example: Mixture of sodium chloride and iron fillings, salt and sulphur; and oil and water are examples of heterogeneous mixtures.

Is the mixture stable or do the particles begin to settle after sometime? 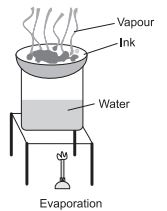 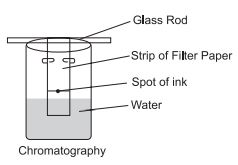 Group I: Mix and crush iron filings and sulphur powder.

Q1. Anil’s sister accidentally added some water into the bottle containing olive oil and she was afraid of the scolding. Anil helped his sister and separated the water from olive oil using bottle as separating funnel.
(a) What is the principle of using and working of separating funnel?
(b) Suggest two separation techniques used to separate liquid mixtures.
(c) What value of Anil is seen in the above case?
Ans. (a) The principle of separating funnel is difference in the densities of two liquids.
(b) Liquid mixtures can be separated by distillation and fractional distillation. (c) Anil showed the value of helping, caring and responsible behaviour.

Q2. Preeti saw a labour entering into the sewage manhole immediately after removing the lid. She promptly stopped the labour from entering into the manhole and told him to wait for some time before he enters into it.
(a) What will happen if the labour immediately enters into the manhole (for cleaning) after removing the lid?
(b) Name main gases that are released from the manhole.
(c) What value of Preeti is seen in the above act?
Ans. (a) If the labour immediately enters the manhole on removing its lid he would die due to suffocation and inhalation of poisonous gases which are compressed and released by sewage.
(b) Gases released from the sewage manhole are methane, carbon dioxide and hydrogen sulphide.
(c) Preeti shows the value of moral responsible behaviour and aware citizen.

Q3. Prasanna wanted to buy a deodorant from the shop. While buying a bottle he felt that it was slightly heavier than usual deodorant bottle that he purchased everytime. He read the weight mentioned on the bottle and told the shopkeeper to weigh the same. He found the bottle was heavy and on opening the deodorant bottle he found it half-filled with water. He complained the matter to the consumer authority.
(a) Define density.
(b) Apart from water what is the other substance that some shopkeepers add into the deodorant.
(c) What value of Prasanna is reflected in this act?
Ans. (a) Density of any substance is defined to be the mass of the substance per unit volume.
(b) One can add some cheap gases or compressed air in the deodorant bottles.
(c) Prasanna showed the value of being having leadership quality, rightful, aware and responsible citizen.

Q4. Rita’s father always got his vehicle checked for pollution control. He got it tested for the aerosol if released by his car. He also uses unleaded petrol and makes use of public transport wherever possible. He sparingly use his car.
(a) What is aerosol?
(b) What happens when smoke released from vehicle mixes with fog?
(c) What are the values of Rita’s father is reflected here?
Ans. (a) When the solid or liquid is dispersed in a gas it is called aerosol e.g. smoke.
(b) When smoke mixes with fog it forms smog.
(c) Rita’s father is an aware citizen, environmentally concerned and dutiful.

Q1. A student was given a mixture containing copper oxide (insoluble) and copper sulfate (soluble) and asked to separate them. Firstly, she stirred the mixture into water, then filtered it. Next, she evaporated the filtrate.
(a) What substance was the residue in the filtration?
(b) Describe what the filtrate was.
(c) What difference in properties allows substances to be separated by filtration?
(d) What substance was collected by evaporation?
Ans. (a) copper oxide
(b) A solution of copper sulphate
(c) Particle size
(d) Solid copper sulphate

Q2. Sandy is learning to cook. He accidentally mixed the icing sugar with the corn flour and spilled some raw rice grains into it as well. (Icing sugar and cornflour are both fine powders. Icing sugar is soluble, cornflour is not.) To separate this mess, he firstly sieved it. What went through the sieve he stirred into water, and let it stand overnight? In the morning a sediment had formed. He carefully poured the clear liquid into a tray and put it into the warm oven to evaporate.
(a) What was caught by the sieve?
(b) What difference in properties allows substances to be separated by sieving?
(c) What was the sediment?
(d) What solid will be in the oven tray when dry?
(e) What other method might Sandy have used to collect the substance which was a sediment?
Ans. (a) Rice
(b) Particle size
(c) Corn flour
(d) Icing sugar (or just sugar)
(e) Filtration

Q3. Name the technique(s) which are suitable for separating the following mixtures:

Q4. The following diagram shows a set-up of a simple distillation. Q5. A mixture of pebbles, fine sand and salt was sieved. What passed through the sieve was mixed with water and allowed to stand? A sediment formed. The clear liquid was poured off and evaporated. The sediment was also dried. Use a flowchart to show the procedure and what was collected.
Ans. Q6. A mixture of salt, water and chalk dust (insoluble) was filtered. The residue was dried. The filtrate was divided into two parts. One part was evaporated, the other part was distilled. Construct a flowchart and show what was collected at each step.
Ans.