Q1. Pressure and temperature determine the state of a substance. Explain this in detail.
Ans. (1) Any matter i.e., solid, liquid or gas when experiences an increase in temperature they change their state. Example:

Take ice cubes in a beaker or heat them slowly, the temperature increases and the ice melts to form liquid. Heat this liquid further it will becomesteam.

(2) On lowering down the temperature of any matter, show change in their state.

Take the steam that is coming out of a boiling water and allow it to cool down, it condenses to form water and on further cooling of this water we get ice.

(3) On applying pressure and reducing temperature we can liquefy gases or change them into solid. Example: Take carbon-dioxide gas, reduce its temperature and apply lot of pressure on it so that it changes into solid carbon dioxide, called dry ice, which is used as refrigerant for cooling. If the pressure on it is further decreased it directly changes into gas. In LPG cylinders, the petroleum gas is first cooled and further lot of pressure change is applied to it into liquid state. While using this LPG, we release the pressure exerted on it and hence it comes out in the form of gas.

(1) Surface area: If the surface area is increased the rate of evaporation also increases.
(a) To dry the clothes we spread them to dry faster.
(b) Tea in saucer cools faster than in a cup.

(2) Temperature: If the temperature is increased the rate of evaporation also increases. Due to increase in temperature the particles gain more kinetic energy and change their phase from liquid to gaseous. Water will evaporate faster in sun than in shade.

(4) Wind speed: With the increase in wind speed, the rate of evaporation increases. The particles of water vapour move away with the wind, decreasing the amount of water vapour in the surrounding.

Q3. Cooking gas is often stored and delivered in steel bottles. Over a period of time pressure of the gas in the steel bottles does not change.
Air and helium are gases that are often used to fill rubber balloons. Over a period of time balloons gradually shrink. Explain these observations.
Ans. The molecules of gas exert pressure on the walls of the container. The steel containers have a wall strong enough to withstand the pressure of the gas but the walls of the balloon are not that rigid and hence shrinks.

Q4. The observations given below determine whether the changes described are likely to involve the formation of new combinations of matter, or are physical changes. Analyse.

(b) Take containers of different shapes. Put a 50 ml mark on these containers using a measuring cylinder from the laboratory. 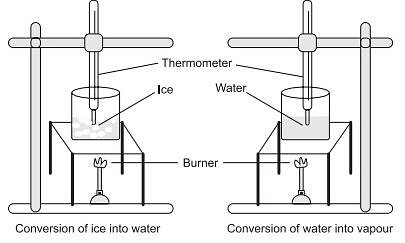 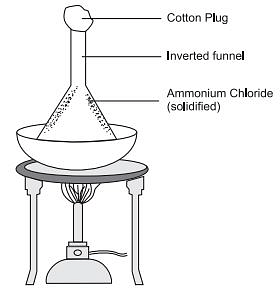 Inference: A solid on heating changed into a gas without changing into liquid state. This process is called sublimation.

Q1. Adil parked his bicycle on a sunny day in a parking stand of his school campus. When the school got over Adil saw his burst cycle tyre. Thereafter he kept less air in his cycle tyres and did not inflate them fully.
(a) Why did the tyre burst?
(b) Why is air compressible?
(c) What value of Adil is reflected in the above act?
Ans. (a) The tyre burst because the air inside the tyre got heated and therefore exerted greater pressure on the walls of the tyre.
(b) Air is compressible because it has large intermolecular space.
(c) Adil showed the value of intelligence, awareness and self responsibility.

Q3. Sita lived in a village and could not afford refrigerator in her house. She knew how to keep water cold and preserve all perishable items in her house. She kept wet cloth surrounding the earthen pot to keep water cool, she also kept vegetables fresh by keeping them in wet gunny bag and timely sprinkled water over it.
(a) Why did Sita keep wet cloth surrounding the earthen pot?
(b) Suggest one more method of keeping the house cool in summer.
(c) What value of Sita is reflected in the above case?
Ans. (a) The wet cloth gave the cooling effect to the pot, as the water in the cloth evaporated and evaporation causes cooling effect. (b) By sprinkling some water on the lawn/veranda of the house can keep the house cool. (c) Sita showed the value of responsible behaviour.

Q4. Shreya commutes in a CNG fitted van to school every day along with many other students. She told the van driver to get the CNG connection certified and timely checked it for any leakage or loose connection of pipes. She told the driver to be more careful during summers.
(a) What is CNG?
(b) Why should one be more careful with CNG cylinders during summer?
(c) What value of Shreya is seen in the above act?
Ans. (a) CNG is Compressed Natural Gas used as fuel.
(b) During summers, the CNG connections and cylinder need to be checked because the gas expands due to heat and if there would be any leakage then it would cause fire in the vehicle.
(c) Shreya showed the value of concerned citizen and morally responsible behaviour

Q2. What are the three different types of mixtures? Define each one.
Ans. Suspensions, Colloids, and Solutions. Suspensions: A suspension is a heterogeneous mixture containing particles that are distinct from the surrounding medium. Colloids: A colloid is a suspension in which a solute-like phase is dispersed throughout a solvent-like phase. Solutions: A solution is a liquid mixture in which the minor component (the solute) is uniformly distributed within the major component (the solvent).

Q5. Use the solubility graph below to answer the following questions 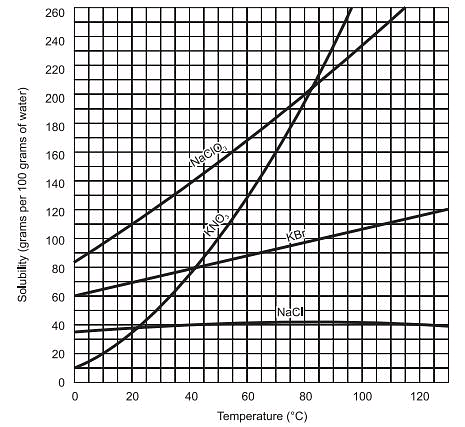 Q7. How could you tell by looking at a solution that it was saturated?
Ans. If the additional solute is added and it remains undissolved the solution can be considered as saturated.

Q9. Given an unknown mixture consisting of two substances, explain how a scientist could use lab techniques to determine whether the mixture is a true solution, a colloid, or a suspension.
Ans. If the unknown mixture can be separated by filtration then it is a suspension. If the scattering of light by the particles is observed then it is a colloid. Otherwise all others are true solutions.