(a) Nitrogen fixation: Plants cannot use free nitrogen present in the air. This nitrogen molecule is converted into nitrates and nitrites which can be taken up and used to make the required molecule.
This is called nitrogen fixation which can be done by the bacteria that live in the root nodules of leguminous plants. By physical process i.e., during lightning, the high temperature and pressure created in the air convert nitrogen into oxides of nitrogen which dissolve in water and come down along with rain. This is also called nitrification.

(b) Ammonification: The nitrogen compounds formed are taken by plants to form proteins which are further converted into ammonia.

(c) Denitrification: The nitrates and nitrites of nitrogen are acted upon by other group of microbes e.g. Pseudomonas bacteria, which convert these compounds into free nitrogen gas.

Nitrogen cycle: 1. Free nitrogen from atmosphere is converted into nitrates by bacteria or by lightning.

2. Nitrates mix with soil, is absorbed by the plants to make proteins.

3. The proteins in plants and animals are converted into amino acids and ammonia.

4. Ammonia is converted into nitrates and then these nitrates and nitrites present in soil is acted upon by other group of bacteria called denitrifying bacteria.

This process is called denitrification, nitrates are converted into free nitrogen and is released back to the atmosphere. 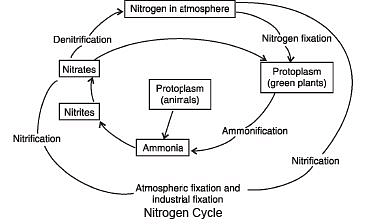 Q2. Explain biosphere.
Ans. Biosphere: It consists of the sphere where life exist. Life can exist if all the spheres given below are present.

(a) Lithosphere: The crust of the earth also called as land which forms the upper layer of the earth i.e. soil. The soil provides all the nutrients for all organisms.

(b) Hydrosphere: Water available in various forms on the earth is called hydrosphere. Water exists in solid—(ice), liquid—(water and gaseous)—(water vapour). It is used by all life forms for their survival.
Water helps in the transportation of nutrients, dissolves nutrients and minerals in it, make it available for the plants.

(c) Atmosphere: Atmosphere consist of air with different gases present in it like O2, N2, CO2 and other gases. Ozone present in stratosphere helps the life-forms from harmful ultraviolet radiations of the sunlight.
Various gases present in the atmosphere are useful for combustion (O2), respiration (O2), photosynthesis (CO2) etc.

Q3. What is biogeochemical cycles? Explain the pathway of carbon cycle with the help of a labelled diagram.
Ans. A biogeochemical cycle is defined as the movement of elements through organisms and the environment. The geological activities add the elements present in them into the easily accessible environment from which all living (bio) organisms can use them. This happens due to the chemical processes, such as the formation of molecules.
The Carbon cycle is usually thought of as four major reservoirs of carbon; the atmosphere, the terrestrial biosphere (freshwater systems and non-living organic material, e.g. soil, carbon), the oceans (that has dissolved inorganic carbon, living and non-living marine biotic factors) and the sediments (which includes fossil fuels) interconnected by pathways of exchange.
The movement of carbon occur because of various chemical, physical, geological, and biological processes. The ocean contains the largest active pool of carbon near the surface of the Earth, but the deep ocean does not rapidly exchange with the atmosphere. 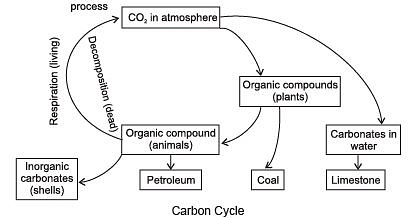 Q4. What is nitrogen fixation? Mention two differences between nitrification and denitrification processes. Name the organisms involved in this processes.
Ans. As part of these life processes, nitrogen is transformed from one chemical form to another. The transformations that nitrogen undergoes as it moves between the atmosphere, the land and living things make up the nitrogen cycle.
Nitrogen in its gaseous form can’t be used by most of the living organisms. It needs to be converted( or ‘fixed’ )to a more usable form through a process called fixation. There are three ways by which nitrogen can be fixed to be useful for living things:

(i) Biologically: Nitrogen gas diffuses into the soil from the atmosphere, and species of bacteria convert this nitrogen to ammonium ions (NH4+), which can be used by plants. Legumes (such as rhizobium ) are often grown by farmers because they have nodules on their roots that contain nitrogen-fixing bacteria.

(ii) Through lightning: Lightning converts atmospheric nitrogen into ammonia and nitrate (NO3) that enter soil with rainfall.

(iii) Industries: In industries nitrogen gas is converted into ammonia (NH3–) and nitrogen-rich fertilizers to supplement the amount of nitrogen fixed naturally.

Nitrification: Nitrifying bacteria in the soil convert ammonia into nitrite (NO2–) and then into nitrate (NO3–). This process is called nitrification. Compounds such as nitrate, nitrite, ammonia and ammonium can be taken up from soils by plants and then used in the formation of plant and animal proteins. For examples:

Q5. Explain how nitrogen compounds adds to the environment and what are the impacts of it?
Ans. Increased nitrogen inputs (into the soil) has helped in the production of food which can feed more people. The agricultural practices are responsible for the nitrogen fixation on Earth through fertilizers and the cultivation of nitrogen-fixing crops. The nitrogen in excess can reach from soils into waterways. The nitrogen that collects in water contributes to eutrophication. The other problem that can occur during nitrification and denitrification is when the chemical process is not completed and nitrous oxide (N2O) is formed. This is of concern, as N2O is a greenhouse gas and it contributes to global warming. A balance of nitrogen compounds in the environment supports plant life and is not a threat to animals. It is only when the cycle is not balanced and the problems occur.

Q6. What is greenhouse effect? List the two greenhouse gases. State the ultimate effect of increase in greenhouse gases in the environment.
Ans. The rise in the temperature of the environment due to the increased layers of gases enveloping the globe which allows the heat radiations i.e. Infra-red radiations to enter the earth but does not allow them to escape is called greenhouse effect.
Greenhouse gases are carbon dioxide, methane, water vapour and nitrous oxide.
The increase in the emission of these greenhouse gases has caused the rise in the temperature of the earth which has further led to the melting of the glaciers resulting in rise of the sea level. It is predicted that in coming years the coral reefs will be destroyed and most of the coastal areas will be submerged under water.