The document Long Answers - Some Natural Phenomena, Science, Class 8 Class 8 Notes | EduRev is a part of the Class 8 Course Class 8 Science by VP Classes.
All you need of Class 8 at this link: Class 8 Q. 2. Explain the mechanism of thunderstorms.
Ans. During the development of a thunderstorm, the air currents move upward while the water drops move downward. These movements cause separation of charges. The positive charges collect near the upper edges of the clouds and negative charges accumulate near the lower edges. There is accumulation of positive charges near the ground also. When the amount of accumulated charges becomes very large, the air which is normally a poor conductor of electricity, is no longer able to resist their flow. Negative and positive charges meet, producing streaks of bright light and sound. This process is called an electric discharge. The process of electric discharge can occur between two or more clouds or between clouds and the earth. In this way thunderstorm is caused. Q. 5. Explain the mechanism of earthquakes.
Ans. The tremors are caused by the disturbance deep down in the uppermost layers of earth. The uppermost layer of earth is called crust. The crust of earth is not a one piece. It is fragmented. Each fragment is called a plate. These plates are in continual motion. When they brush past one another or a plate goes under another due to collision, they cause disturbances and show up as an earthquake on the surface of the earth. Although we know the causes of the earthquake, it is not possible to predict when and where the next earthquake might occur. 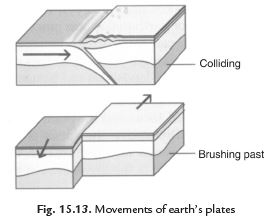 Q. 6. What is a seismograph? How does it work?
Ans. The instrument used to record the seismic waves is called seismograph. The tremors produce waves on the surface. The instrument is simply a vibrating rod or a pendulum. Which starts vibrating when tremors occur. A pen is attached to vibrating system. The pen records the seismic waves on a paper which moves under it. By studying these waves scientists construct a map of earthquake. They can also estimate its power to cause destruction. Q. 7. What suggestions will you give the people to make ‘Quake Safe’?
Ans. Some suggestions are:
(i) Consult qualified architects and structure engineers.
(ii) Make the structure symmetrical so that the mass is distributed uniformly.
(iii) Use of mud or timber is better than the heavy construction.
(iv) The cupboards and shelves are to the walls.
(v) Be careful about where to hang wall clocks, photo frames, water heater etc. So that in the event of an earthquake they do not fall on people.
(vi) All building should have fire fighting equipment installed.