Less
JEE  >  All Types of Questions for JEE  >  MCQs (One or More Correct Options): Rotational Motion

Correct Answer is option (a, c and d) 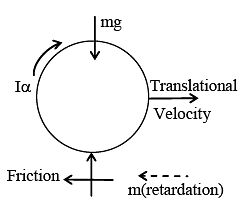 Since, the impulse is applied along a horizontal diameter, therefore, due to that impulse the sphere starts to move translationally without any rotational motion. Since the floor is rough, therefore, friction comes into existence and that opposes forward sliding of the sphere as shown in figure. Hence, friction acts along backward direction which not only provides a retarding force but produces an accelerating moment also. Due to that moment the sphere experiences an angular acceleration. Hence, initially translational velocity of the sphere decreases but angular velocity increases. Therefore, KE of the sphere initially decreases. Rotational motion is accelerated till angular velocity (ω) becomes equal to r v and then the friction disappears. Hence, then total energy of sphere remains constant. Therefore, option (B) alone is correct and rest options are incorrect.

Q.2. A ring of mass M and radius R sliding with a velocity v0 suddenly enters into rough surface where coefficient of friction is μ, as shown - 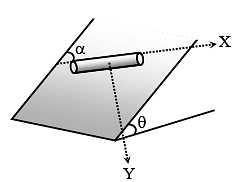 Q.4. A uniform rod of mass 1 kg and length 1 m is kept vertical on the edge of a horizontal table. The rod is hit at a height 75 cm from table surface as to provide impulse 5 N/S in horizontal direction. Then -(a) Displacement of rod after 1 sec is 5√2 m(b) Initial velocity of rod is 5 m/s which increases with time(c) Initial angular velocity of rod is 15 rad/sec which increases with time(d) Numbers of rotation in 1 sec is 15/2π

Correct Answer is option (a, b and d)Just after impulse -Velocity of centre of mass = 5 N/s/1kg = 5m/s (Horizontal)Angular velocity of rod =

∴ Displacement of centre of mass =

Correct Answer is option (b and c)(a) If velocity and acceleration are not in same direction. Work done by force perpendicular to acceleration will not be zero.(b) If the object is at rest no force can do work.(c) If force is perpendicular to velocity work done will be zero.(d) If the point on the body has velocity component in direction of application of force work done will be non-zero.

Q.6. A wheel rolls purely between a rough horizontal surface below it and a horizontal plank above it under the action of a horizontal force F applied on the plank. If at any time

Correct Answer is option (a and b) 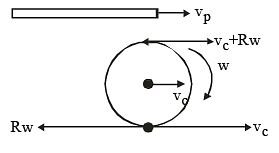 Q.7. Four identical rods, each of mass m and length l, are joined to form a rigid square frame. The frame lies in the xy plane, with its centre at the origin and the sides parallel to the x and y axes. Its moment of inertia about.(a) the x-axis is 2/3 ml2

Correct Answer is option (a, b, c and d) 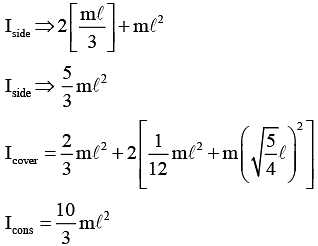 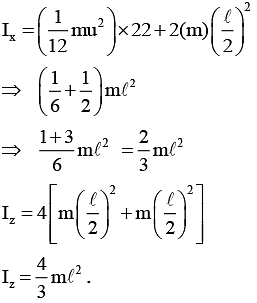 Q.8. A disc is given an initial angular velocity ω0 and placed on rough horizontal surface as shown. The quantities which will not depend on the coefficient of friction is/are

Correct Answer is option (c and d)The velocity of the disc when rolling begins can be obtained using the conservation of angular momentum principle about the point through which the friction force acts. So, the coefficient of friction has no bearing on final velocity. The work done by the force of friction will simply be change in kinetic energy.

Q.9. A thin rod of mass ’m’ and length ‘l’ rotates freely about one of its ends. The other end held upwards and released when it makes an angle 'θ' with the vertical and top edge acquires a maximum velocity of ums-1. Then(a) The maximum change in PE is

(b) The angle (θ) from which it released is

(c) The angle (θ) from which it released is

(d) The maximum change in PE is

Correct Answer is option (b and d)

Q.10. A particle and a pivoted rod, lie on a horizontal smooth plane. The particle moves perpendicular to length of rod as shown in the diagram

Correct Answer is option (a, b and d) 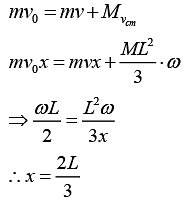