Refering to fig. 4.1, we can see there is an oxide layer below the Gate terminal. Since oxide is a very good insulator, it contributes to an oxide capacitance in the circuit. 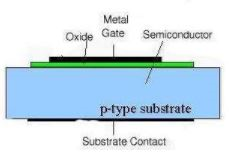 Normally, the capacitance value of a capacitor doesn't change with values of voltage applied across its terminals. However, this is not the case with MOS capacitor. We find that the capacitance of MOS capacitor changes its value with the variation in Gate voltage. This is because application of gate voltage results in band bending in silicon substrate and hence variation in charge concentration at Si-SiO2 interface.

Depending upon the value of gate voltage applied, the MOS capacitor works in three modes :

1. Accumulation: In this mode, there is accumulation of holes (assuming n-MOSFET) at the Si-SiO2 interface. All the field lines emanating from the gate terminate on this layer giving an effective dielectric thickness as the oxide thickness (shown in Fig. 4.2a). In this mode, Vg <0

2. Depletion: As we move from negative to positive gate voltages the holes at the interface are repelled and pushed back into the bulk leaving a depleted layer. This layer counters the positive charge on the gate and keeps increasing till the gate voltage is below threshold voltage. As shown in Fig. 4.2b we see a larger effective dielectric length and hence a lower capacitance.

3. Strong Inversion: When Vg crosses threshold voltage, the increase in depletion region width stops and charge on layer is countered by mobile electrons at Si-SiO2 interface. This is called inversion because the mobile charges are opposite to the type of charges found in substrate. In this case the inversion layer is formed by the electrons. Field lines hence terminate on this layer thereby reducing the effective dielectric thickness as shown in Fig. 4.2c)

In the last chapter, we gave you an introduction of MOS as capacitor. In this chapter, we will see how MOS works as a capacitor with derivation of some related equations. We see that if we keep making VGS more and more -ve, the charges Qs and Qm keep increasing. Thus, it is acting like a good parallel plate capacitor. Its capacitance can be given as-

For +ve bias voltage on gate, increasing VGS will increase Qm and Qs.

as a function of

where Na is the substrate acceptor density,∈s is dielectric constant of substrate and

is the surface potential at substrate.

The depletion region grows with increased voltage across the capacitor until strong inversion is reached. After that, further increase in the voltage results in inversion rather than more depletion. Thus the maximum depletion width is:

But by Gauss's law, electrons must compensate for increasing Qs.

where charge Qi is due to electrons in the inversion layer.

By Kirchoff's law, VGS  is given by: