Here χ is diamagnetic Susceptibility, µ0 is permeability of free space, e is electronic charge, m is the mass of the electron, ­

χ is the paramagnetic susceptibility, µ0 is the permeability of free space, k is Boltzmann constant, T is absolute temperature, µB is the Bohr magneton and N is the number of molecules per unit volume of the material. Here C is a constant called Curie constant given

Hysteresis in Ferromagnetic Materials (B-H Curve)During the magnetization and demagnetization of the specimen the induction flux density (B) lags behind the applied magnetic field strength (H) and is called ferromagnetic hysteresis. B-H curve is a plot of the induction flux density versus the applied field strength during magnetization and demagnetization of a ferromagnetic specimen.The origin O represents the initially unmagnetised specimen and zero magnetic intensity. As H is increased B also increases and saturation (Bs) is reached (curve oa). At saturation all domains are oriented in the same direction as the applied field. If H is reduced B decreases. But when H reduces to a value zero, B does not reduce to zero and curve ab is traced. The flux density corresponding to H=0 is called remanant induction or remanant flux density (Br = ob). When the magnetizing force is removed the magnetic flux retained by the specimen is measured as retentivity. Now H is reversed in direction and increased. For an applied reverse field of magnitude Hc(oc) the material is completely demagnetized and B=0(Curve bc). The corresponding field Hc is called Coercive field. The measure of magnetic intensity required to completely demagnetize the material is called Coercivity. If further H is increased the curve cd is traced and the reverse saturation is achieved. 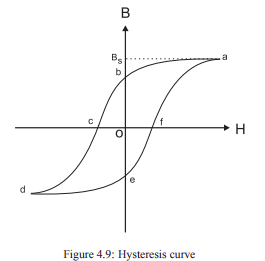 When H is varied from its negative maximum value, through zero, to its original positive maximum value then a similar curve defa is traced. Further the complete variation of H from +H to -H and back from -H to +H will trace a closed hysteresis curve abcdef. The area enclosed by the curve abcdef gives the energy loss per cycle per unit volume of the material. This is called as Hysteresis Loss.