In dealing with electrostatics, we had seen that the electrical polarization of the medium itself influences the electrical behavior of substances. In the same way we have internal currents within a material because there are moving charges in atoms and molecules which can create their own magnetic field.

There are two types effects here, the first is due to the orbital motion of the electrons and the second is due to the intrinsic spin magnetic moment of the electrons. The second effect is purely quantum mechanical in origin and its discussion is beyond the scope of this course. Like in the electrostatic case, the magnetic moment could be intrinsic to an atom or molecule or it could be induced by an externally applied magnetic field.

We will see later that in terms of theor magnetic behavior, substances fall broadly into three classes, viz. diamagnets, paramagnets and ferromagnets. Diamagnetism arises because of electromagnetic induction effect where the atomic currents oppose any change of flux through the atoms by an external magnetic field. We will discuss this effect later in more detail. The total current inside a material consists of two parts, the first is the conduction current, which is due to bodily motion of the free charges in a conductor and the second is due to atomic currents. The latter are too tiny to be taken care of individually and we consider such effects in an average sense.

The quantity is very similar to the polarization in dielectric material. We will calculate the effect due to the magnetization of the material by calculating the vector potential corresponding to the microscopic currents. We had seen earlier that the magnetic vector potential due to a magnetic moment is given by the expression

As we did in the electrostatic case, we can convert this into two integrals, one over the volume and the other over the surface of the material, We can rewrite the vector potential as

We now use the vector identity for the curl of a product of a scalar with a vector,

using which we can write,

takes the role of a surface current. We now identify, as we did in the electrostatic case, a bound volume current and a bound surface current, defined by

The origins of these currents can be understood by realizing that there are large number of internal currents within the material which may not cancel within the volume. The surface term is understood similar to the way the polarization charge was introduced as even when internal currents cancel out, the currents at the boundary do not have neighbouring loops to cancel. Let us calculate the magnetic field due to magnetization of the material.

Let us start with the expression for the vector potential. If the gradient is taken with respect to the point of observation, we can write,

We use the identity,

where A and B are arbitrary vector fields not to be confused with the vector potential and the field respectively.

Using this identity, we have,

operators are with respect to the unprimed index,

is not differentiated with respect to it.

Using the fact that

we can perform the first integration and are left with,

The last term is expressed in terms of gradient of a vector which is to be understood, as explained earlier as gradient of three components of the vector on which it acts. Using the vector identity stated above, and, using the fact that the operator

does not act on vectors or scalars which are functions of primed indices, we can write the second term of the above equation as

the last line follows because the curl in the previous expression is zero. Thus we get, for the magnetic field,

Since curl of a gradient is zero, we get,

If we add the conduction current contribution to the above, we get Ampere’s law for the combined case to be

The integral form of the Ampere’s law follows,

We can rewrite Ampere’s law as

which now includes the contribution due to the magnetic medium. We now define, a new vector

which, incidentally, is also known as the magnetic field. There is a lot of confusion in literature because of this. The B field that we have been using so far, has been called the “magnetic field of induction” or the “magnetic flux density” in literature. However, whenever there is no confusion we will call each of these fields as the magnetic field and the context should make it clear which field we are referring to. When both are used in the same discussion, we will simply call them as the B field or the H field. The line integral of the H- field gives

The situation is very similar to the use of E and D in electrostatics. The H field tries to artificially separate the contribution due to the applied magnetic field and is thought to arise from the conduction current alone. This is artificial because there is no physical way in which one can achieve this separation and what an experiment would measure is the B field which includes both the contributions. Note that there is a dimensional difference between H and B, the former is measured in units of A/m.

Using Stoke’s theorem, we can write the curl of H as

For small applied field the system has a linear response to the field, i.e.,

so that we can write

, the proportionality factor Xm is known as the magnetic susceptibility of the material. As we stated earlier, there are three basic type of magnetic material. There are substances which are known as “paramagnetic” for which the magnetic susceptibility is positive while for “diamagnetic” material , it is negative. There is a third class of material known as “ferromagnets” which show hysteresis behavior. For substances which show linear response, we can write,

where 1+Xm is known as “relative permeability” .

Boundary conditions on B and H fields are obtained by using tricks similar to that used earlier. Gauss’s law

leads to the normal component of magnetic field of induction being continuous at an interface and the Ampere’s law for the H field,

leads to a discontinuity in the tangential component of the H field at a surface having a surface current,

This is very similar to the corresponding electrostatic expression for the scalar potential due to an electric dipole moment,

Thus, following the way we obtained an expression for the scalar potential for a dielectric material and separated the contribution into two parts, a volume part and a surface part, we can write,

and a surface component

In reality, magnetic charges do not exist but it helps drawing parallel to the electric case.)

In this case, since the magnetization is uniform, the volume component vanishes and we are left with

The normal to the surface being in the radial direction, if we take the direction of magnetization along the z direction, 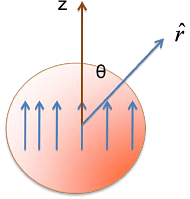 Where the primes quantities refer to coordinates of

and the unprimed quantities to coordinates of

The surface integral is essentially an integration over the solid angle which picks up, because of orthogonality condition on spherical harmonics

term only, leaving us with

Inside the material,  r > = R, r<= r  which gives for the magnetic potential inside,

Using these, we can get expressions for the magnetic field both inside and outside. Inside, since the scalar potential only depends on z,

Outside the sphere, we use spherical polar coordinates and since there is no azimuthal dependence of the potential, we have,

Which is a familiar expression for the magnetic field outside.

The field inside is uniform while the field outside must form closed loops. 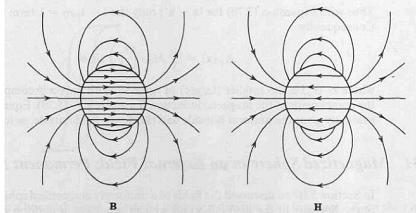 1. Since the magnetization is uniform, there are no bound volume currents. There will however be bound surface currents, given by

Since the current is in the (azimuthal) direction of

the problem is similar to that of a solenoid. The field outside the cylinder is zero but the field inside is along the axis and is given by

2. As the free current is given, we can use Ampere’s law to determine the H field, which is given by

Since the material is linear we can write the corresponding B field by multiplying the field inside by μ and the outside field by μ0 i.e.

is non zero only inside the material and is given by

The volume bound current density is

1. A long cylindrical rod of radius R has a magnetization

in the azimuthal direction. There are no free currents. Find the magnetic field both inside and outside the cylinder due to magnetization.

2. In the preceding problem, take the magnetization to be given by

where r is the distance from the cylindrical axis. Find the magnetic field both inside and outside the cylinder due to magnetization

3. Repeat Problem 2 by calculating the H field and adding the magnetization contribution.

4. A magnetized material is in the shape of a cube of side a as shown . The magnetization is directed along the z direction and varies linearly from its value zero on its surface on the y-

z plane to a value

on the plane x= α Calculate the bound currents both on the surface and inside the material. 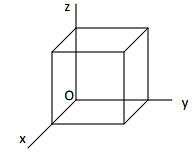 1. The bound volume current is zero since the magnetization has constant magnitude. The surface current density is

The magnetic field inside is zero as there is no volume current inside. The current outside is given by

2. Bound current densities are as follows

Thus the magnetic field outside is zero.

Since the current is in azimuthal direction, in order to calculate the magnetic field, we need to take an Amperian loop which is in the form of a rectangle of height L whose one side is at a distance r from the axis and the other parallel side is outside. Since the field outside is zero, we have,

The bound current density in the volume is

On the top face, the normal direction is

and the magnetization is

the current on the opposite face is oppositely directed.