Sources of magnetic field are steady currents. In such a field a moving charge experiences a sideways force. Recall that an electric field exerts a force on a charge, irrespective of whether the charge is moving or static. Magnetic, field, on the other hand, exerts a force only on charges that are moving. Under the combined action of electric and magnetic fields, a charge experiences, what is known as Lorentz force,

Let us look at the definition of current. Current is a scalar quantity which is the amount of charge that crosses the boundary of a surface of a volume per unit time, the surface being oriented normal to the direction of flow. In the steady state there is no accumulation of charge inside a volume through whose surface the charges flow in. This results in the “equation of continuity”.

If p is the charge density, the current is given by

the current density. Recalling that

Here, the minus sign is taken because, we define the current to be positive when it flows from outside the volume to the inside and the surface normal, as in the previous lectures, is taken to be outward. Using the divergence theorem, we can rewrite this as

Since the relationship is true for arbitrary volume, we can equate the integrands from both sides, which results in the equation of continuity :

The principle is a statement of conservation of electric charge.

As we stated earlier in the lecture, magnetostatics deals with steady currents which implies

so that for magnetostatic phenomena, we have

Though we will not be talking much about it, we would like to mention that this equation is also relativistically invariant.

We consider a current distribution to comprise of infinitesimal current elements whose direction is taken along the direction of the current flow. If

is such a current element located at the position

the field due to it at the position

given by the law of Biot and Savart, Note that, like the Coulomb’s law, this is also an inverse square law as

is the distance from the current element to the position where the field is to be calculated. The constant μ0 which appears here is known as the permeability of free space, which has a value

We will now do some algebraic manipulation of this equation.

and summing over the current distribution, the field at the position

We use the relation

and absorb the minus sign by interchanging the order of the cross product,

In arriving at the last step, we have used the fact that the gradient being with respect to r it has no effect on

Since the curl operator

does not depend on the integration variable, we can take it outside the integral sign and write,

As divergence of a curl is zero, we have,

This is the magnetostatic Gauss’s law. Comparing with the corresponding electrostatic formula

we see that this equation implies non-existence of magnetic monopoles.

We are aware that a vector field is uniquely given by specifying its divergence and curl. We will now try to find the curl of the magnetic field.

Using the form of

The first term can be simplified as follows. We first take the divergence operator inside the integral as the integration is with respect to the primed variable,

The first term can be converted to a surface integral, using the divergence theorem and the surface can be taken to infinite distances making the integral vanish. The second term also vanishes because of continuity equation. Thus the first tem of eqn. (2) vanishes, leaving us with the second term

operator can be taken inside the integral and as it is derivative with respect to r, it acts only on

This is known as Ampere’s Law. Thus the magnetic field is specified by

Note that for the case of electric field, the curl is zero , which is characteristic of a conservative field.

We will now provide an integral formulation of these two relations.

Consider a closed volume V defined by a surface S. The normal to the surface is defined in the usual way. We can take the volume integral of the first relation and convert to a surface integral using the divergence theorem.

This is the integral form of magnetostatic Gauss’s law

Take the second relation. Let S be an arbitrary surface through which the current passes. The surface integral is then given by

The first relation can be converted to a line integral using the Stoke’s thorem,

In the following, we illustrate the use of Biot Savart’s law and Ampere’s law. Just as direct use of Coulomb’s law for calculation of electric field for a charge distribution was not always easy and we had to restrict our calculation to a few cases where symmetry of the problem allowed us to use Gauss’s law to our advantage, direct use of Biot Savart’s law can be made only in a few cases, though the law is always applicable. Ampere’s law provides an attractive alternative for cases where symmetry allows us to express the magnetic field in a form which allows us to use the line integral of the magnetic field in terms of B itself.

Taking an Amperian loop in the form of a circle of radius R,

the unit vector along the azimuthal direction. 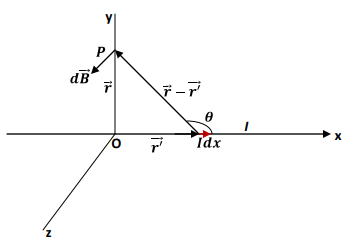 is in the xy plane. We have,

It is directed along

are in the xy plane. We also have,

Thus the magnetic field is given by

Field along the axis of a circular loop

Let us take the loop in the xy plane. We wish to calculate the field along the z axis. A length element along the circle is given by

and has the position vector 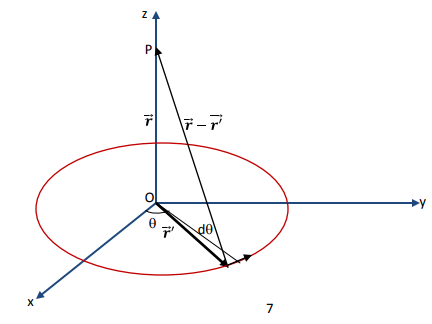 We take the point P along the z axis so that

With these relations, we have,

Thus, the magnetic field along the axis is given by

where we have used the magnetic moment vector

given by the product of the current with the area of the loop directed along the normal to the loop according to the right hand rule. It is observed that at large distances from the loop the magnetic field varies as the inverse cube of distance from the loop,

3. A long cylindrical wire has a current density flowing in the direction of its length whose density is J = J0r, where r is the distance from the cylinder’s axis. Find the magnetic field both inside and outside the cylinder.

4. A thin plastic disk of radius R has a uniform charge density σ. The disk is rotating about its axis with an angular speed ω. Find the magnetic field along the axis of the disk at a distance z from the centre.

1. Let us take the yz plane to be the plane of the paper so that the direction of current flow is perpendicular to this plane. Consider a single conducting plane carrying current in the x direction. Let the plate be in the xy plane. The surface current is shown by a circles with a dot. 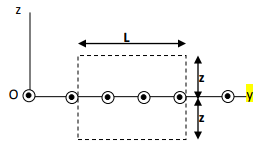 Consider an Amperian loop of length L and width 2z located as shown. The magnetic field direction above the plane is in –y direction while that below is in +y direction. Taking the loop to be anticlockwise, the line integral of magnetic field is

Thus, above the plane the field is

and below the plane it is

Not that the field strength is independent of the distance from the plane. If we have two planes, at z=0 and z=d, the former having a linear current density

and outside both the plates the field is zero.

2. Since the centre is along the line carrying the current,

for the straight line section and the contribution to magnetic field is only due to the semicircular arc.

3. The total current in the wire can be obtained by integrating the current density over its cross section The current enclosed within a radius r from the axis is

Using Ampere’s law, the field at a distance is r < R is

The total current carried by the wire being

the field outside is given by

4. The current on the disk can be calculated by assuming the rotating disc to be equivalent to a collection of concentric current loops. Consider a ring of radius r and width dr. As the disc rotates, the rotating charge on this annular section behaves like a current loop carrying current

The field at a distance z due to this ring is

The total field is obtained by integrating this expression from 0 to R,

which can be easily performed by a substitution x = r2 + z2. The result is

1. Two infinite conducting planes at z=0 and z=d carry currents in opposite directions with surface current density in the same directions

2. Two infinite conducting sheets lying in x-z and y-z planes intersect at right angles along the z axis. On each plane a surface current

Find the magnetic field in each of the four quadrants into which the space is divided by the planes.

3. Consider the loop formed by two semicircular wires of radii R1 and R2 (>R1) and two short straight sections, as shown. A current I flows through the wire. Find the field at the common centre of the semicircles.

4. The current density along a long cylindrical wire of radius a is given by

where r is the distance from the axis of the cylinder. Use Ampere’s law to find the magnetic field both inside and outside the cylinder .

1. Refer to the solution of Tutorial assignment 1. The field due to a single plane carrying a linear current density

Its value between the planes is zero.

2. Referring to the solution of tutorial problem 1, the field due to the current in xz plane is along Likewise for the y-z plane, the field is along

below (x < 0). The magnitude of the field in each case is the same and is

Thus the field along the first quadrant is

and along the fourth is

One can similarly find the fields in the other two quadrants.

4. First find the current enclosed within a distance r from the axis,

Thus the field inside is given by

Outside the cylinder the total current