Let the current be in the z direction. The vector potential also points the same way.

The current being linear

the vector potential becomes a simple one dimensional integral

The expression diverges when the limits are evaluated. This is not a very serious issue because we have seen that the vector potential is arbitrary up to a constant which in this case is infinite. For instance, if instead of integrating from -∞to+∞ we realized that the integrand is even, we could integrate it from zero to infinity and double the result. In that case the integral diverges only in the upper limit leaving us with a finite expression in the lower limit. Discarding the infinite constant, we would then have,

Thus the curl of the vector potential only has Ø component

By symmetry, since the wire is infinite, the derivative with respect to z must be zero and we have

where we have explicitly added gradient of an arbitrary scalar field.

We can then use the symmetry of the problem to find the vector potential.

Vector Potential of a solenoid

We know that the field inside a solenoid is along its axis (z direction) and is zero outside. If we take a circular path of radius s centered along its axis, the flux through the circular area is

The line integral of the vector potential is

This is because A is along the direction of current which is circumferential.

The vector potential is thus given by for s<R

Though the field outside is zero, the vector potential does not vanish outside the solenoid. This is because, if we take a circle of radius s>R , the flux through the circular area is

flux being contributed only from inside the solenoid. Thus for  s>R 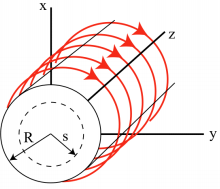 which falls off as inverse of distance from the axis.

Does vector potential have any physical significance?

It may be seen from the above example that the vector potential remains non-zero outside the solenoid even though the magnetic field itself has become zero. It turns out that the vector potential is not just a mathematical artifact but has physical reality. The experiment described below illustrates this though the effect that we are talking about is of quantum mechanical origin. (The source of the picture is William O. Straub (2010)) 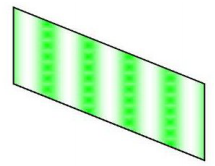 You are familiar with the Young’s double slit experiment done with a beam of coherent light. The experiment is not really restricted to light wave but can be performed with matter wave such as a beam of electrons. We learn from quantum theory that like light exhibits dual behavior, that of wave as well as particles known as photon, a wavelength is associated with material particles as well. This is known as de Broglie wavelength and is given by the ratio of the Planck’s constant to the momentum of the particle.

The experiment is performed with an electron beam in place of light. What is done is to put a small solenoid just beyond the slits between the slits and the screen. Initially the solenoid does not carry any current and its dimensions are small enough so that it does not disturb the interference pattern produced on the screen because of the phase difference between electron waves arriving at the screen from the slits.

Uniform magnetic field is of practical importance. Let us take the field to be in an arbitrary direction having a magnitude B. One of the possibilities for the vector potential is

The second term is zero because

The thirdand the fourth terms are calculated as follows,

because the field is uniform.

Adding all the four terms, result follows. It can be seen that the Coulomb gauge condition is satisfied.The divergence of the vector potential is given by

because the first term vanishes as the field is uniform while the second term vanishes because the curl of position vector is zero. Thus the expression satisfies Coulomb gauge condition. If the magnetic field is along the z direction, we can take either of the following expressions for the vector potential components,

Both these expressions are valid expressions for the vector potential and they differ by gradient of a scalar field. It can be checked that if we add a term

to the first tem where

we get the second expression.

Vector Potential of a current sheet

Let the current sheet be in the xy plane with the current flowing along the x direction with a linear current density K,

We have seen that the magnitude of the magnetic field is constant both above the pland and below the plane with a discontinuity at the boundary.

Since the field is constant, we can use expression for the vector potential from the last section, For z>0

The vecor potential below the plane is obtained by changing the minus sign in the beginning of the expression to a plus. Note that the components of the vector potential (both tangential and normal) are continuous across the boundary, though the magnetic field itself is discontinuous. 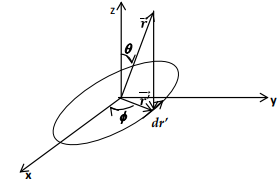 The current being in the azimuthal direction, the current density vector in this case can be written as

not being a constant vector, its direction at the point of observation is not the same as its direction on the current element. As a result this expression cannot be directly substituted in the general expression for vector potential.)

Contribution of a current element

to the vector potential is given by

The vector potential due to the loop is given by

In order to evaluate it, we will expand

in Legendre polynomials, as we did in electrostatic problems.

For large values of r, we need to keep only leading terms. The lowest order term l=0 for which

Let us keep the next order term with l=1which gives,

The scalar product inside the integral can be simplified and expressed as a sum of two quantities ,one of which is a perfect integral ,which on integration would give zero.

Remember that in this expression,

is a fixed vector (being the observation point) and

is change in the value of the vector

We can write, using chain rule,

Substituting this in the preceding relation, we get,

The loop integral of the first term vanishes as it is a perfect integral. The second term gives,

of the loop. We thus have, interchanging the order of the cross product to take care of the minus sign,

This form has the advantage that it can be used to calculate the magnetic field at large distances even away from the axis. If we write this in spherical coordinates, the vector potential clearly has only the azimuthal component, and we can write,

This gives for the magnetic field components,

We can also obtain a coordinate independent form for the magnetic field from the expression for the vector potential,

Proof of this is left as an exericise.

1. Show that the coordinate free form of the magnetic field derived from the vector potential for the circular loop is given by

2. A vector potential is given by

is a unit vector along an arbitrary but given direction. Calculate the corresponding magnetic field.

3. A spherical shell of radius R carries a uniform surface charge density σ The sphere is rotated with a uniform angular velocity ω about an axis (z direction).). Find the vector potential and the magnetic field of induction at an arbitrary point both outside and inside the shell.

1. Magnetic field can be written as

(The full expansion of

is constant, leaving us with two terms above. The first term gives zero because

the remaining term is easily expanded to get the desired result).

2. The magnetic field is given by

The vector potential corresponds to a constant magnetic field in the given direction.

3. Since the charges are on the surface, we can write the current density as follows:

The vector potential can be written as 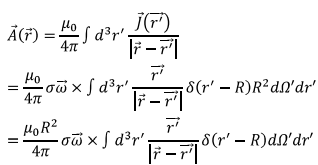 The integral above can only depend on the direction

Taking the dot product of both sides with

, and performing the delta function integration, we get

where θ' is the angle between the variable vector

Using the orthogonality of spherical harmonics, the term that survives is

and we are left with

Thus the vector potential is given by

[ The integral can be done in more direct method. Let us take the point of observation along the z axis and let the sphere be rotating about an axis which lies in the xz plane and which makes an angle

with the z axis. If the

with respect to a spherical system of coordinates with its origin at the centre of the sphere. We can expand

in Cartesian coordinates ( expending a cross product in spherical coordinates being not a straightforward exercise),

would give zero. We are left with only the contribution coming from the last term of the second term of the cross product. The term which survives is

is in xz plane. The rest of the derivation is same as above]

we only have to consider the second term. As

is independent of Ø, the divergence is zero.

2. The field inside a cylindrical wire carrying a current in the z direction is given by

Since the magnetic field is along the azimuthal direction, we have on equating it with the azimuthal component of the vector potential,

3. The moving charge can be considered to be equivalent to a current qv with the current density being directed along the direction of the velocity. The vector potential can be written as

The magnetic field is obtained by taking the curl of this equation. Using,

and using the fact that the velocity vector being constant, the first term of above is zero, we get,