Consider interface of two regions, marked 1 and 2. A surface current flows which comes out of the plane of the paper.

Consider a thin pillbox of height h and area

perpendicular to the media with half below the surface and half above it. According to magnetostatic Gauss’s theorem

can be expressed as a surface integral,

which shows that the normal component of magnetic induction is continuous

In an identical fashion, it follows that since in Coulomb gauge, we have,

the normal component of the vector potential is continuous,

Let us define our coordinate system . In the figure shown, the interface is perpendicular to the page and the normal to the surface

is outward into the region 1. The unit vectors

Are both in the plane of the interface, with

coming out of the page and

also on the surface perpendicular to

Let us calculate the line integral around the loop. Taking the long side of the loop to be parallel to

direction, the line integral of the magnetic field is (as h→0)

By Ampere’s law, this should be equal to

to the line integral obtained earlier, we have,

Using the cyclic property of scalar triple product for the expression to the left and reversing the order of the dot product on the right , we can rewrite the left hand side and get,

[This can be seen by substituting

in the preceding expression and realizing that since

lies on the interface,

being equal to the magnetic flux through the plane of the loop is zero. Thus both the tangential and the normal component of the vector potential are continuous.

corresponding to the magnetic field in the region.

Along with the divergence for the magnetic field being zero, this leads to Laplace’s equation for the scalar magnetic potential,

The equation is similar to the case of electrostatic potential. The multiplicative factor μ0 has been introduced because of dimensional reasons and will be clarified later.

The problem has cylindrical symmetry. Taking the direction of the current along the z direction, the magnetic field is given by

where r is the distance of the point of observation from the wire. Expressing the equation defining the scalar potential in cylindrical coordinates, we have,

Only the second term of the left hand expression can give us the desired magnetic field,

The scalar potential is thus proportional to the polar angle. The potential is multiple valued because as the origin is circled more than once, the angle increases by 2π.

In the previous lecture, we have obtained expressions for the components of a magnetic dipole directed along the z direction. We have seen that the magnetic field can be written as

Writing the gradient in spherical polar and equating the components, we have,

Both these equations are satisfied if we choose, 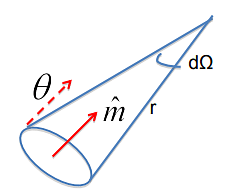 The solid angle can be both positive and negative depending on the way the loop is viewed from the point of observation.

A comment about singlevaluedness of the scalar potential is appropriate here. When we take the line integral of the magnetic field, there is no discontinuity if the loop does not enclose any current. Thus as the point of observation is changed, there will be a discontinuity if it posses through the loop. In the following, the current loop is made to be the rim of an open surface, the shape of the surface is immaterial as long as the rim is the current loop. If we take any loop on this surface , there is no discontinuity if the loop does not go around the rim. If the shape is taken to be a hemisphere, the loop cannot start from a point on the upper hemisphere and pass on to the lower hemisphere. If the loop does pass through the current, we have, 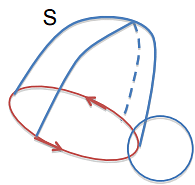 This is consistent with the fact that every time the loop is enclosed, the solid angle changes by 4π. 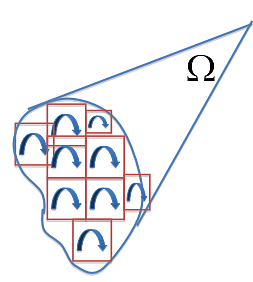 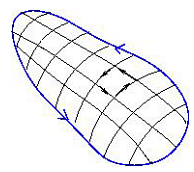 What about an arbitrary loop? We need to find the solid angle it makes at the point of observation. We can divide the current loop into a large mesh of small loops, each one of which behaves like a magnetic moment. The directions of adjacent loops cancel leaving only the contour of the loop, as shown. Since the discontinuity in the scalar potential when we traverse a current loop once is –I, If we traverse the loop so that it traces a solid angle Ω at the point of observation, the scalar potential would change by

1. We have shown that

In terms of vector potential, this can be written as

Take the cross product of both sides with

To do so note that we can simplify

2. Choose the origin at the centre of the solenoid of length L. In Problem 1 of the Self Assessment Quiz, you will prove that the scalar potential at a distance z is given by

Let the number of turns per unit length be n. Consider a width dz’ of the solenoid located at z’ from the centre. The potential due to this is given by as the centre of the loop is shifted to z’)

1. The problem is essentially to calculate the solid angle subtended by the current loop at a distance z from its centre. With the point where we need the scalar potential as the     centre draw a sphere of radius

subtends a solid angle 4π , the loop subtends 2π(1-Cosθ).In terms of the distance z from the centre of the loop, the solid angle is

Thus the scalar potential is given by

2. This is a simple application of the magnetostatic boundary condition

Thus the magnetic field of induction in the second medium is