This is known as Lorentz force law.

In the presence of both electric and magnetic fields, the net force on Q would be:

Current in a Wire

A line charge λ traveling down a wire at a speed

Magnetic force on a segment of current-carrying wire is,

points in the same direction

When charge flows over a surface, we describe it by the surface current

where is σ surface charge density and

When the flow of charge is distributed throughout a three-dimensional region, we describe it by the volume current density

is the current per unit area-perpendicular to flow.

where ρ is volume charge density and

Current crossing a surface S is

Example 1: A wire ABCDEF (with each of side of length L ) bent as shown in figure and carrying a current I is placed in a uniform magnetic induction B parallel to the positive y-direction. Find the force experienced by the wire. 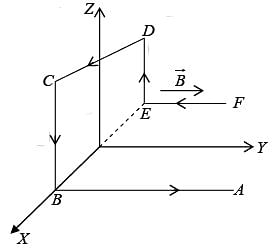 FE and BA are parallel to magnetic induction

. Magnetic force on each of  them will be zero. DE and CB are perpendicular to

. They carry currents in opposite directions forces on them will be equal in magnitude and opposite in direction. The net force due to these portions of wire will be zero. Now force on side DC is

Example 2: A semi–circular wire of radius R carries a current I and is placed in a uniform field B acting perpendicular to the plane of the semi–circle. Calculate force acting on the wire.

Consider an element of length dl of the wire. The

force on this element is obtained by

The total charge per unit time leaving a volume V is

Because charge is conserved, whatever flows out through the surface must come at the expense of that remaining inside:

(The minus sign reflects the fact that an outward flow decreases the charge left in V.) Since this applies to any volume, we conclude that

This is the precise mathematical statements of local charge conservation.

Note: When a steady current flows in a wire, its magnitude I must be the same all along the line; otherwise, charge would be piling up somewhere, and it wouldn't be a steady current. Thus for magnetostatic fields

and hence the continuity equation becomes:

The magnetic field of a steady line current is given by

Magnetic Field due to Wire

Let us find the magnetic field a distance d from a long straight wire carrying a steady current I.

Magnetic Field due to Solenoid and Toroid

The magnetic field of a very long solenoid, consisting of n closely wound turns per unit length of a cylinder of radius R and carrying a steady current I is:

Magnetic field due to Toroid is

where N is the total number of turns.

Example 3: Find the force of attraction between two long, parallel wires a distance d apart, carrying current I1 and I2 in the same direction. 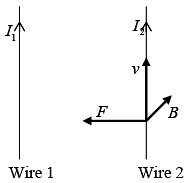 Force per unit length is towards (1) and net force is attractive.

Example 4: Find the magnetic field a distance d above the center of a circular loop of radius R, which carries a steady current I. 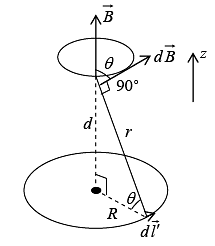 attributable to the segment

as shown. As we integrate

Example 5: Find the force on a square loop placed as shown in figure, near an infinite straight wire. Both the loop and the wire carry a steady current I.

The force on the two sides cancels.At the bottom,

The magnetic field of an infinite wire is shown in the figure (the current is coming out of the page). Let us find the integral of

around a circular path of radius r, centered at the wire, is

Notice that the answer is independent of r; that is because B decreases at the same rate as the circumference increases. If we use cylindrical coordinates ( r ,φ,z ) , with the current flowing along the z axis,

In general we can write 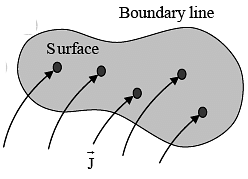 Example 6: A steady current I flow down a long cylindrical wire of radius a. Find the magnetic field, both inside and outside the wire, if

, flowing over the x–y plane. 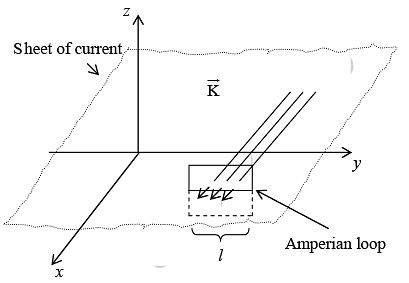 thus field cancels each other.

Draw a rectangular amperian loop parallel to the yz plane and extending an equal distance above and below the surface. Now apply ampere’s law, we find

{One Bl from top segment, and the other from bottom}

Note: The field is independent of the distance from the plane, just like the electric field  of a uniform surface charge.

goes to zero at infinity,

Example 8: What current density would produce the vector potential

(where K is   a constant), in cylindrical coordinates ?

Just as the electric field suffers a discontinuity at a surface charge, so the magnetic field is discontinuous at a surface current. Only this time it is the tangential component that changes.

Thus the component of

is a unit vector perpendicular to the surface, pointing “upward”. Like the scalar potential in electrostatics, the vector potential is continuous across, a boundary:

guarantees that the normal component is continuous, and

But the derivative of

inherits the discontinuity of

point in the same direction as I and is a function of r (the distance from  the wire). In cylindrical coordinates

where b is arbitrary constant.

must be continuous at R,

which means that we must pick a and b such that

Example 10: Find the vector potential of an infinite solenoid with n turns per unit length, radius R, and current I.

where φ is the flux of

through the loop in question.Inside solenoid: 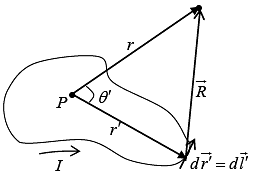 We can derive approximate formula for the vector potential of a localized current distribution, valid at distant points. We can always write the potential in the form of a power series in 1/r, where r is the distance to the point in question. Thus we can always write 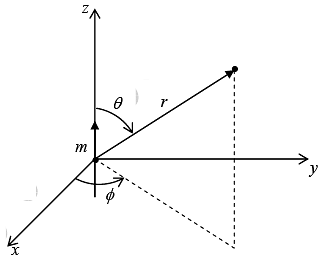 is the magnetic dipole moment:

Note: (a) When a magnetic dipole is placed in a uniform magnetic field

(b) In non-uniform field, dipoles have net force

(c) Energy of an ideal dipole

in an magnetic field

(d) Interaction energy of two dipoles separated by a distance 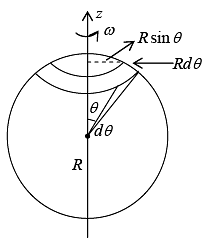 If a piece of magnetic material is examined on an atomic scale we will find tiny currents: electrons orbiting around nuclei and electrons spinning about their axes. For macroscopic purpose, these current loops are so small that we may treat them as magnetic dipoles. Ordinarily they cancel each other out because of the random orientation of the atoms. But when a magnetic field is applied, a net alignment of these magnetic dipoles occurs, and medium becomes magnetically polarized, or magnetized.Magnetization

The Field of a Magnetized Object (Bound Currents)

Consider a piece of magnetized material with magnetization

Then the vector potential of a single dipole 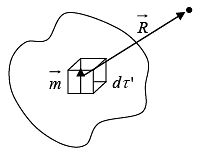 In the magnetized object, each volume element dτ ′ carries a dipole moment

so the total vector potential is

The equation can be written as

The first term is like potential of a volume current

while the second term is like potential of a surface current,

is the normal to the unit vector. With these definitions, the field of a magnetized object is

throughout the material, plus a surface current

on the boundary. We first determine these bound currents, and then find the field they produce.

parallel to its axis. Find the magnetic field (due to

) inside and outside the cylinder.

The field is that of a surface current

that is the case of a solenoid,

So the field outside is zero.Field inside is:

where K is a constant; r is the distance from the axis. Find the magnetic field due to

for points inside and outside the cylinder.

So the bound current flows up the cylinder, and returns down the surface.

is bound current and

The quantity in parentheses is designated by the letter

is the total free current passing through the amperian loop.

plays a role in magnetostatic analogous to

in electrostatic: Just as

allowed us to write Gauss's law in terms of the free charge alone,

permits us to express Ampere's law in terms of the free current alone- and free current is what we control directly. Note: When we have to find

in a problem involving magnetic materials, first look for symmetry. If the problem exhibits cylindrical, plane, solenoid, or toroidal symmetry, then we can get

directly from the equation

For most substances magnetization is proportional to the field

where χm is magnetic susceptibility of the material. 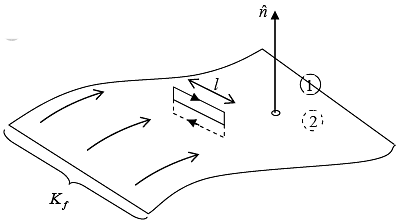 The boundary between two medium is a thin sheet of free surface current Kf . The Ampere’s law states that

Example 15: A current I flows down a long straight wire of radius a. If the wire is made of linear material with susceptibility χm , and the current is distributed uniformly, what is the magnetic field a distance r from the axis? Find all the bound currents. What is the net bound current following down the wire?