The document Major Animal Groups Class 9 Notes | EduRev is a part of the Class 9 Course Science Class 9.
All you need of Class 9 at this link: Class 9

(i) Cellular Nature : Members of kingdom animalia are wall less, eukaryotic and multicellular.

(ii) Nutrition : It is heterotrophic.

(iii) Locomotion : Most animals are mobile.

(iii) Tube within a tube - e.g. Aschelminthes to Chordates

Body symmetry - It is similarity in arrangement of body parts.

(i) Radial symmetry- Body can be divided into similar halves by any plane passing through centre axis.

(ii) Bilateral symmetry- Body can be divided along a median longitudinal plane into two mirrored portions right and left halves.

Body is divided into segments externally as well as internally (by septa).

A body cavity is a fluid-filled space between the gut and the outer body wall of an animal.

(ii) Pseudocoelomates : In these animals, coelom is not lined by mesoderm. e.g. Nematodes.

(iii) True coelomates : In these animals, coelom is lined by mesoderm.

True coelom may be of two types :

(i) Schizocoelom : Coelom is originated by spliting of mesoderm. e.g. Annelids, Arthropods, Molluscs.

(i) Ectotherm or Poikilotherm or Cold-blooded :

1. They live mostly in the sea (marine) but a few occur in fresh water.

3. They are sessile or stationary.

4. Most of sponges are asymmetrical, some are radially symmetrical.

5. Sponges have pores on body and these pores are called ostia. Ostia open into a canal system and the canal opens to outside by a large opening ; named osculum present at top.

6. Skeleton of sponges is made up of minute calcareous or siliceous spicules or spongin fibres.

1. Aquatic animals mostly marine, some of live in colonies (corals) while other live solitary.

3. These are the first multicellular animals having tissue level organization with distinct labour of division.

4. Body has a central gastrovascular cavity- coelentron which lacks anus but has mouth which is surrounded by tentacles.

6. Nematocysts serve the function of paralysing the prey by injecting poison.

8. Nervous system is primitive, has only network of nerve cells (nerve net).

1. Mostly parasitic animals, some are free-living (e.g. Planaria) and aquatic.

3. The organisms are unsegmented, dorsoventrally flattened.

5. Suckers and hooks are usually present.

6. Alimentary canal has only one opening i.e. mouth, anus is absent.

9. They are hermaphrodite i.e. male and female reproductive organs are present in same animal.

1. They are parasitic, most are free living (in fresh or marine water or terrestrial).2. They have narrow, elongated and cylindrical bodies. Body is covered by cuticle.3. Triploblastic unsegmented animals with bilateral symmetry and organ system level of organization, having tube within tube body plan.4. Pseudocoelom is present.5. Alimentary canal straight and complete with mouth and anus.6. Unisexual organisms.

1. They occur in fresh water, sea water or moist soil. Some are free living, some are burrowing and a few are parasites.

2. Body is metamerically segmented i.e. body is divided externally by transverse grooves as well as internally by septa, these segments are called metameres.

3. They are the first animals with true body cavity i.e. coelom.

4. They are bilaterally symmetrical, triploblastic animals.

5. Body is covered by thin cuticle.

6. Locomotion by parapodia or Chitinous setae which are segmentally arranged.

8. Respiration is through the general body surface.

10. Blood vascular system is closed. Blood is red due to the presence of the pigment " haemoglobin.

11. The nervous system consists of a dorsal "brain" and a ventral nerve cordhaving ganglia and lateral nerves in each body segment.

12. Sexes may be united (hermaphrodite) or separate. 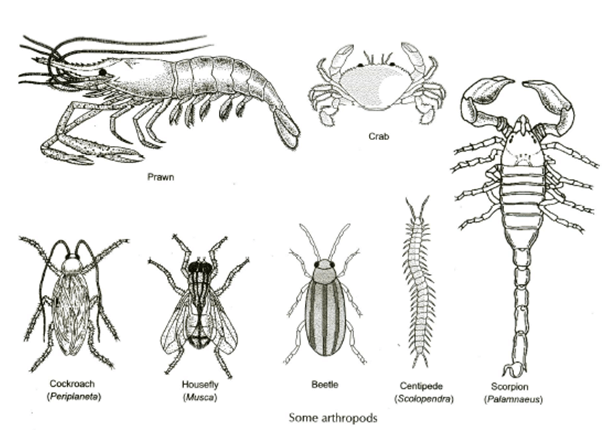 The second largest group of animals.

1. They are mostly aquatic, living in sea water, some of fresh water.

2. They are soft, unsegmented, triploblastic, coelomate animals with bilateral symmetry.

3. The body is divided into an anterior head, a ventral muscular foot and a dorsalvisceral mass of hump. Over the hump, a fold of thin skin called mantle orpallium is present, which secretes the shell.

4 The soft body is usually supported by a hard shell of calcium carbonate.

5. Locomotion is brought about by muscular foot.

6. Buccal cavity contain a rasping organ the 'radula' for feeding.

1. They are exclusively marine animals.

2. Body is triploblastic, coelomate and without segmentation with radial symmetry in adult and bilateral in larvae.

5. Digestive system is complete , mouth is on the lower surface and the anus is on the upper surface.

7. Reproduction sexual, asexual or by regeneration. Sexes are separate. 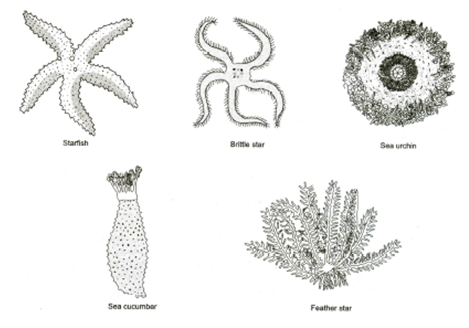