HUMANAs you are aware, humans are sexually reproducing and viviparous. The reproductive events in humans include

Note - Reproductive events occur after puberty. There are remarkable differences between the reproductive events in the male and in the female, for example, sperm formation continues even in old men, but formation of ovum ceases in women around the age of fifty years.MALE REPRODUCTIVE SYSTEM

(i) Primary sex organ: Essential organs which form the gametes. In males, the gamete forming organs are the testes.

(ii) Secondary sex organ: These form the passage for the gametes to help the union of male & female gametes.

(iii) While in female - Fallopian tube, uterus & vagina. (Breast is an accessory sex organ).(iv) Development of Sex organ: During intra-uterine life (IUL) testis & ovary develop from mesoderm. They develop in abdominal cavity in IUL, at the time of birth, testes descend down into scrotal sac but ovaries remain in abdominal cavity.MALE REPRODUCTIVE SYSTEM

Such testis can not develop and function properly and may develop malignancy.

Orchiopexy: When the undescended testes are brought into scrotal sac by surgical process during childhood this process called as orchiopexy.

Castration: Crushing of testes in bulls to convert them to bullocks. (This makes than more obidient due to fall in the level of testosterone). 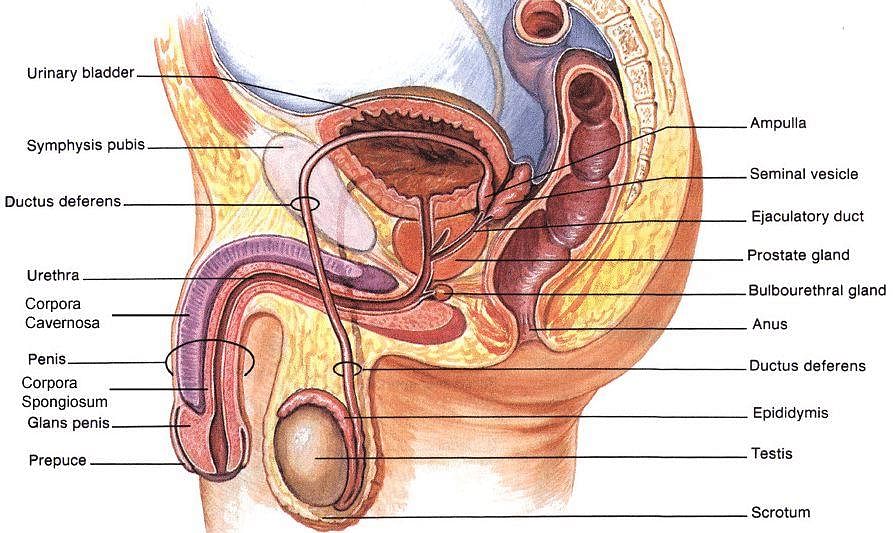 INTERNAL STRUCTURE OF TESTISTestis is covered by three coats. Outer most is tunica vaginalis. Middle coat is tunica albuginea & inner most is tunica vasculosa. Tunica vaginalis has a parietal & visceral layer. The Tunica albuginea is a dense, white fibrous coat covering the testis all around.Tunica vasculosa is the inner most vascular coat of the testis lining testicular lobules. Each lobules has 1 to 3 seminiferous tubules, which join together at the apices of the lobules to form a network of tubules called as rete testis. 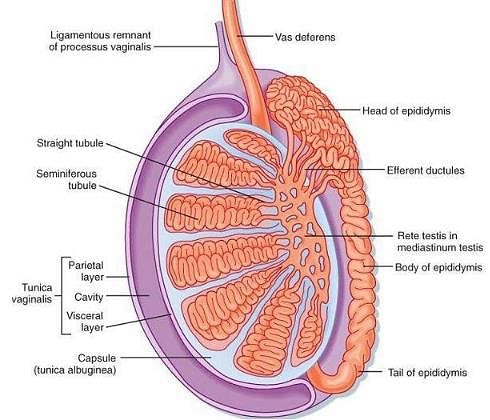 Rete testis fuse to form 10 to 20 efferent ductule called as vasa efferentia.These ductules come out from upper dorsal surface of testis & open into common tubules, which get highly coiled to form epididymis or ductus epididymis. This epididymis is responsible for functional maturation of sperm. Total number of seminiferous tubules in each testis is about 750.

Enters inside the abdominal-cavity from the scrotal-sac in the form of Vas deferens or ductus deferens. Epididymis can temporarily stores the sperms for as long as one month and here the functional maturation of sperms takes place. 18 to 24 hr. after functional maturation of sperm, sperms proceed further to store in vas deferens.The wall of epididymis is made up of 2 layers-outer circular muscle layer and inner epithelium. Wall of vas deferens is also made up of 2 layers-outer circular muscle layer and epithelium. The sperms reach the abdominal cavity due to the pulsation of the vas deferens.Cutting of the vas deferens & tieing it by a thread is termed as vasectomy. Cutting & tieing of the oviducts is termed as the tubectomy.Vas deferens runs upward & enter into abdominal cavity. Both vas deferens coil around the ureter of their respective sides. The vas deferens now forms ejaculatory duct and opens into prostatic urethra.In human 1 pair of seminal vesicles are situated on dorsolateral side of urinary bladder which open seperately before the terminal ends of vas deferens. So terminal ends of vas deferens meet to form a single ejaculatory duct.

ACCESSARY REPRODUCTIVE GLANDSThe substances secreted by the accessary reproductive glands help in reproduction, these are

PENIS- EXTERNAL GENITALIAUrethra continues in a muscular & tubular organ called as penis. Terminal part of shaft of penis is bulging, it is called as Glans penis. This glans penis is covered by a movable skin called as prepuce or foreskin. 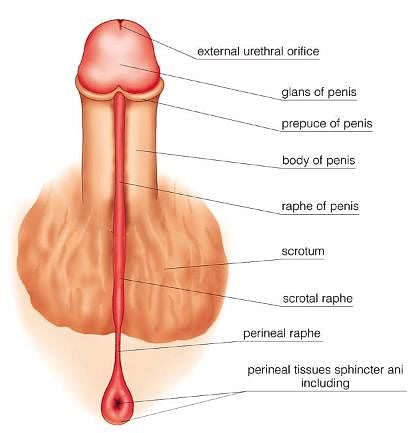 Fig: External Genitalia of MenA special type of sebaceous gland is found on the prepuce called preputial gland which secretes smegma. Removal of prepuce by surgery is called is circumcision.