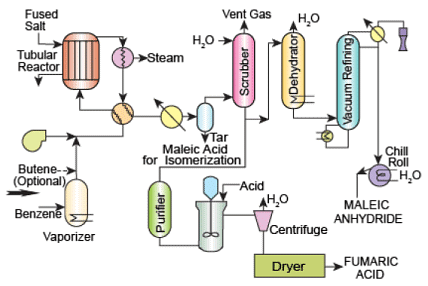 Maleic anhydride can be used as a highly reactive and versatile raw material. It can be used in the manufacture of alkyd resins, which in turn are used for making paints and coatings. It can also be used in making agricultural chemicals like herbicides, pesticides and plant growth regulators.

2. Explain in brief how azeotropic distillation of maleic acid is carried out to generate maleic anhydride.

Ans. The aqueous maleic acid is fed to the azeotropic distillation column which is fed with an azeotropic agent such as xylene.  The water is removed along with xylene as overhead vapors as a minimum boiling heterogenousazeotrope as the top product and the bottom product is the maleic anhydride.  The heterogeneous azeotrope can be easily separated from the xylene with gravity settling  principle and the recovered xylene is fed back to the distillation column as the reflux stream.

Ans. The reaction is highly exothermic and heating the feed to a high temperature is not desired.  Had it been so, the waste steam recovery boiler would be kept after the heat integrated exchanger. This way, we generate good quality process steam from waste heat recovery boiler.

4. Explain how the usage of centrifuge is justified from process technology perspective

Ans. From physical property data, the solubility of maleic acid and fumaric acids are 68 g/100 ml water and 0.63 g/100 ml water respectively.  This indicates that while maleic acid is soluble in water, fumaric acid is not.  Therefore, after isomerisation reaction, the fumaric acid solids rich solution is sent to a centrifuge so as to separate the solids from the water.  This clearly indicates  how physical properties play an important role in choosing the separation process.

Ans. Yes, this way we reduce the total utility requirements in the process. In fact the exact steam requirements (fresh) cannot be estimated unless we have a good idea of the total energy balances for the system.

6. Why is vacuum distillation required for maleic anhydride refining ?

Ans. Maleic anhydride tends to polymerize upon aging and heating.  Therefore, heating the maleic anhydride in vacuum conditions reduces the boiling point.  Also, maleic anhydride is very corrosive and corrosiveness of any compound enhances with temperature.  With all these limitations, vacuum distillation would suite the requirement. 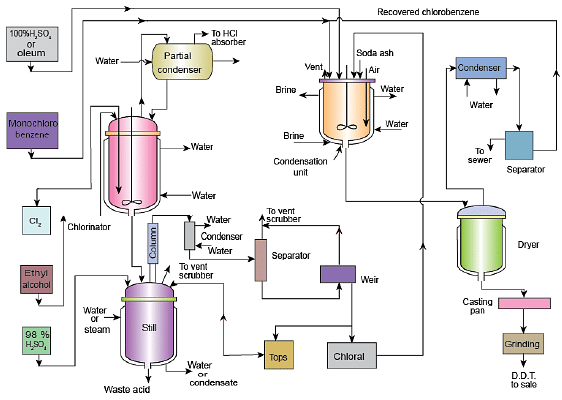 With this flowsheet, we finish Module 2 in which process technology for good number of petrochemicals has been elaborated.  We next move to the third module namely polymer technology.

DDT is mainly used as a pesticide. DDT was the first of the modern insecticides. However, the use of this chemical has been restricted to some degree due to its harmful ill effects.

2. Why is air circulated in the DDT condensation unit?

Ans.  In the DDT condensation unit, two liquids need to be thoroughly mixed.  For this purpose, air is sparged so that interfacial area of the reactants enhances drastically due to the sparging effect.

3. DDT is a solid but the organic layer from the DDT condensation unit does not have any solid. Why?

Ans. DDT is soluble in most organic solvents but not in water.  Therefore, upon drying, the liquid mass consisting of dissolved DDT in monochlorobenzene gets generated as a solid product.

Ans. Due to the high temperature of the still, it is possible that some chloral hydrate decomposes to unwanted compounds such as HCl, chloroform and ethanol.  These compounds will be non-condensible at the condenser operating temperatures and therefore, these are vented out.

5. Discuss what technology you would adopt to recover the H2SO4 from the spent solutions.

Ans. The sulphuric acid stream from the units will have higher concentrations of organics. Therefore, technology should be targeted that enables the recovery of these organics. Multiple effect evaporator appears to be suitable in this regard to concentrate the sulphuric acid as well as eliminate the organic impurities.  The regenerated sulphuric acid with its regained original strength can be reused for the DDT condensation and chloral hydrate conversion operations.