The most basic system that is used as a model for vibrational analysis is a block of mass m connected to a linear spring (with spring constant K and unstretched length ℓ0) and a viscous damper (with damping coefficient c). In addition, an external force P(t) is applied to the block and the displacement of the block is measured from the inertially fixed point O, where O is the point where the spring is unstretched. Finally, the spring and damper are both attached at the inertially fixed point Q. This system is shown in Fig. 1–1 Denoting unit vector in the direction from O to Q as Ex and the inertial reference frame of the ground by F, the inertial acceleration of the block is given as

Next, the forces exerted by the spring and damper are given, respectively, as

First, because the spring is attached at point Q, we have 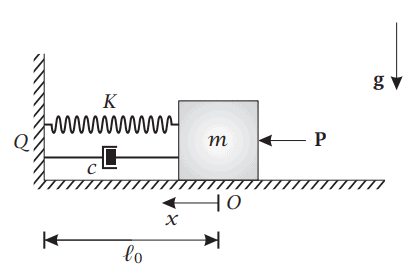 Figure 1–1 Block of mass m sliding without friction along a horizontal surface connected to a linear spring and a linear viscous damper.

where r and rQ are the positions of the block and the attachment points of the spring, respectively. Using a coordinate system with its origin at point O at Ex as the first principal direction, we have

The force in the linear spring is then given as

Therefore, the force exerted by the viscous damper is obtained as

(1–13)Applying Newton’s second law to the particle, we obtain

Dropping Ex from Eq. (1–14) and rearranging, we obtain the differential equation of motion as

Now historically it has been the case that the differential equation has been written in a form that is normalized by the mass, i.e., we divide Eq. (1–15) by m to obtain

where p(t) = P (t)/m. Furthermore, it is common practice to define the quantities K/m and c/m as follows:

It is seen that Eq. (1–17) is a second-order linear constant coefficient ordinary differential equation. Often, the term “constant coefficient” is replaced with the term time-invariant, i.e., we say that Eq. (1–17) is a called a second-order linear time-invariant (LTI) ordinary differential equation. The terminology “time invariant” stems from the fact that, for a given input p(t) and a given set of initial conditions

at the (shifted) initial time t = t0 + τ. Because of this fact associated with an LTI system, without loss of generality we can assume that the initial time is zero, i.e., t0 = 0. Thus, when studying the zero input response of an LTI system we can restrict our attention to initial conditions

which can be further written as

here xh(t) is the homogeneous solution (i.e., the solution for a particular set of initial conditions