Yet a further version of the D Type flip-flop is shown in Fig. 5.3.6 where two D type flip-flops are incorporated in a single device, this is the D type master-slave flip-flop. Circuit symbols for the master-slave device are very similar to those for edgetriggered flip-flops, but are now divided into two sections by a dotted line, as also illustrated in Fig 5.3.6. 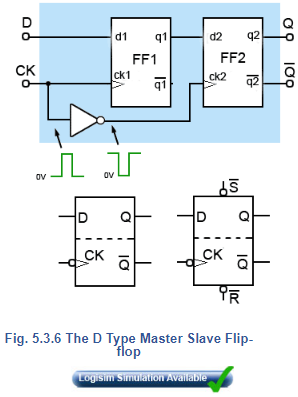 Considering the master slave flip-flop as a single device, the relationship between the clock (CK) input and the Q output does look rather like a negative edge triggered device, as any change in the output occurs at the falling edge of the clock pulse. However, as illustrated in Fig. 5.3.7 this is not really negative edge triggering, because the data appearing at Q as the clock pulse returns to logic 0, is actually the data that was present at input D at the RISING edge of the CK pulse. Any further changes that may occur in data at the D input during the clock pulse are ignored. D type master-slave flip-flops are also available with asynchronous