The idea that scientific knowledge is dangerous is deeply embedded in our culture. Adam and Eve were forbidden to eat from the Tree of Knowledge, and in Milton's Paradise Lost the serpent addresses the tree as the 'Mother of Science'. Indeed the whole of western literature has not been kind to scientists and is filled with images of them meddling with nature with disastrous results. Just consider Shelley's Frankenstein, Goethe's Faust, and Huxley's Brave New World. One will search with very little success for a novel in which scientists come out well - the persistent image is that of scientists as a soulless group unconcerned with ethical issues. And where is there a film sympathetic to science?Part of the problem is the conflation of science and technology. The distinction between science and technology, between knowledge and understanding on the one hand and the application of that knowledge to making something, or using it in some practical way, is fundamental.Science produces ideas about how the world works, whereas the ideas in technology result in usable objects. Technology is much older than anything one could regard as science and unaided by any science. Technology gave rise to the crafts of early humans, like agriculture and metalworking. It is a technology that carries with it ethical issues, from motorcar production to cloning a human.By contrast, reliable scientific knowledge is value-free and has no moral or ethical value. Science merely tells us how the world is. That we are not at the center of the universe is neither good nor bad, nor is the possibility that genes can influence our intelligence or our behavior.The social obligations that scientists have as distinct from those responsibilities they share with all citizens come from them having access to specialized knowledge of how the world works, not easily accessible to others. Their obligation is to both make public any social implications of their work and its possible applications and to give some assessment of its reliability.It is not easy to find examples of scientists as a group behaving immorally or in a dangerous manner, the classic paradigm being the eugenics movement. The scientific assumptions behind this proposal are crucial; the assumption is that most desirable and undesirable human attributes are inherited. Not only was talent perceived of as being inherited, but so too were insanity and any kind of so-called feeblemindedness. They completely failed to give an assessment of the reliability of their ideas. Quite the contrary, and even more blameworthy, their conclusions seem to have been driven by what they saw as the desirable social implications. By contrast, in relation to the building of the atomic bomb, scientists behaved morally and fulfilled their social obligations by informing their governments about the implications of atomic theory. It was an enormous engineering feat to build the bomb but the decision to do this was taken by politicians, not scientists.The moralists have been out in force telling us of the horrors of cloning. Many others, national leaders included, have joined in a chorus of horror. But what horrors? What ethical issues? In all the righteous indignation not a single relevant new ethical issue has been spelled out.Those who propose to clone a human are medical technologists, not scientists. It is not, as the bio-moralists claim, that scientific innovation has outstripped our social and moral codes. Just the opposite is the case. Their obsession with the life of the embryo has deflected our attention away from the real issue, which is how children are raised and nurtured. The ills in our society have nothing to do with assisting or preventing reproduction but are profoundly affected by how children are treated.Questions 1–6: Do the following statements agree with the information given in the Reading passage. Answer True, False or Not given. Note: True: if the statement agrees with the informationFalse: if the statement contradicts the informationNot given: if there is no information on thisQ.1. The film industry does not make films about science. _______Q.2. Scientists do not work in unison when deciding what needs to be researched. _______Q.3. Parents want to have cloned children now. _______Q.4. Technology was important before the development of science. _______Q.5. Many people consider cloning to be undesirable. _______Q.6. Science and Technology must be seen as separate entities. _______

Question 7: Complete the summary below. Choose NO MORE THAN TWO WORDS from the passage for your answer.Q.7. What influenced the eugenics movement when they were summarizing the findings of their research?

Questions 8-11: Choose ONE phrase from the list of phrases A-H below to complete each of the following sentences. Write the appropriate letters in blanks 8-11 on your answer sheet. 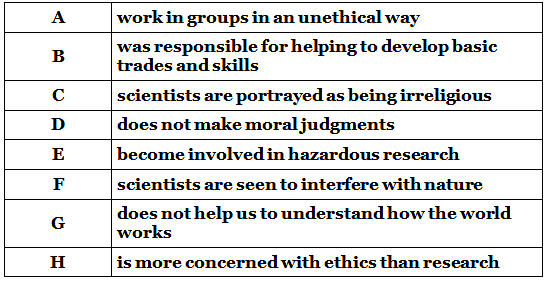 Questions 12: Choose the correct letter, a, b, c, or d.Q.12. According to the writer, Science shows us(a) our position in the universe.(b) how intelligence affects our behavior.(c) what the world is really like.(d) scientists have special social obligations.

The film industry does not make films about science. - False

Scientists do not work in unison when deciding what needs to be researched. - False

Parents want to have cloned children now. - Not Given

Technology was important before the development of science. - True

Many people consider cloning to be undesirable. - True

Science and Technology must be seen as separate entities. - True

What influenced the eugenics movement when they were summarizing the findings of their research? (social implications)

Rarely do scientists - (A).