The document Math Rules For GMAT GMAT Notes | EduRev is a part of the GMAT Course Quantitative Aptitude for GMAT.
All you need of GMAT at this link: GMAT

1. Number properties occur on approximately 10 questions, so they have a signiﬁcant impact on your Quant Score.2. NPs show up heavily in DS questions, so knowing NPs will lead to greater success on DS questions.3. Knowing NPs will give you additional (often faster) ways to answer questions besides conventional math approaches. This knowledge will work well with TEST IT to help you to avoid pacing problems.

(you will learn additional minor NPs in your EMPOWER Training and Quizzes and in the GMAC Ofﬁcial Guide). 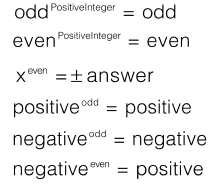 WHY you should know math rules:

1. They affect EVERY question in the Quant section.2. They will provide you with necessary content knowledge and faster ways to do the necessary calculations.

1. Ratios are all about MULTIPLES.2. Ratios tend to be Sufﬁcient.

Percents show up on the GMAT in several forms:

The absolute value signs signal that you are to express the result of the contents as a positive number.

When adding a group of numbers or multiplying a group of numbers, the order doesn’t matter. With a large enough group of numbers, bunching can usually create a math pattern/shortcut that you can use to answer the question. Example: When adding up the numbers from 1 to 10 (inclusive), you could add them up in order (which would take awhile and you might make a math mistake). Instead, try bunching the biggest and smallest numbers, then the next biggest and next smallest, and so on. You’ll notice that a pattern emerges. It’s faster and easier than adding the numbers up in order.

When rounding (or “approximating”) numbers:

When multiplying or dividing by a negative number, an inequality changes “direction”.

Divide both sides by – 2 and change the direction of the inequality,x < -5

Rules to know for faster division:

Prime numbers are divisible by only two things: themselves and the number 1.

Prime Factorization is a math concept that you MIGHT use ONCE on Test Day. The concept is that integers greater than 1 are either Prime number or a series of Primes multiplied together.

Remainders are the “leftover pieces” when doing division. In remainder questions, there is NO decimal and NO fraction, there is only the remainder. 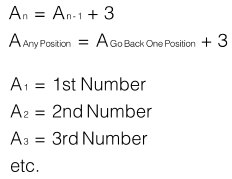 You need to know the following exponent rules: You need to know the following radical rules: Examples of arithmetic with radicals: 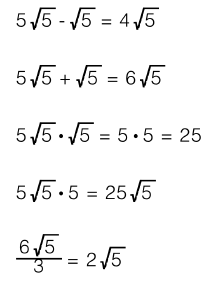 When dealing with a group of numbers, arrange the numbers in order from least to greatest. Be careful about numbers that appear more than once and any variables that are included in a group (those variables could be positive, negative, zero, big, small, decimals or duplicates of the numbers in the group).

If we add a term to the end, the values change….