(a) For individual Observation (or Simple Variates)

Steps to find M. D.
(1) Find mean or median
(2) Take deviation ignoring ± signs
(3) Get total of deviations
(4) Divide the total by the number of items. 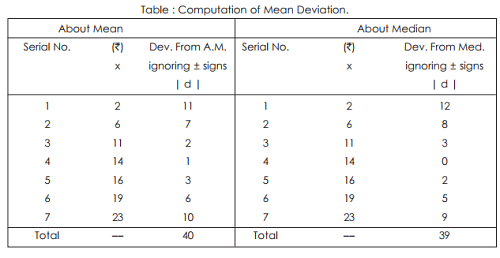 Note : The sum of deviation

about median is 39, less than

(b) For Discrete Series (or Simple Frequency Distribution) The formula for computing M.D. is

Example 46 : To calculate mean deviation of the following series :

Example 47 : The same example as given above.

Example 48 : Find M.D. about A.M. of the following frequency distribution.

Advantages of Mean Deviation :
(1) It is based on all the observations. Any change in any item would change the value of mean deviation.
(2) It is readily understood. It is the average of the deviation from a measure of central tendency.
(3) Mean Deviation is less affected by the extreme items than the standard deviation.
(4) It is simple to understand and easy to compute.

Disadvantages of Mean Deviation :
(1) Mean deviation ignores the algebraic signs of deviations and as such it is not capable of further algebraic treatment.
(2) It is not an accurate measure, particularly when it is calculated from mode.
(3) It is not popular as standard deviation.

Because of simplicity in computation, it has drawn the attention of economists and businessmen. It is useful reports meant for public.