DEFINITION OF CENTRAL TENDENCYIn many a case, like the distributions of height, weight, marks, profit, wage and so on, it has been noted that starting with rather low frequency, the class frequency gradually increases till it reaches its maximum somewhere near the central part of the distribution and after which the class frequency steadily falls to its minimum value towards the end. Thus, central tendency may be defined as the tendency of a given set of observations to cluster around a single central or middle value and the single value that represents the given set of observations is described as a measure of central tendency or, location, or average. Hence, it is possible to condense a vast mass of data by a single representative value. The computation of a measure of central tendency plays a very important part in many a sphere. A company is recognized by its high average profit, an educational institution is judged on the basis of average marks obtained by its students and so on. Furthermore, the central tendency also facilitates us in providing a basis for comparison between different distribution. Following are the different measures of central tendency:(i) Arithmetic Mean (AM)(ii) Median (Me)(iii) Mode (Mo)(iv) Geometric Mean(GM)(v) Harmonic Mean (HM)  CRITERIA FOR AN IDEAL MEASURE OF CENTRAL TENDENCY

(v) It should have certain desirable mathematical properties.(vi) It should be least affected by the presence of extreme observations.ARITHMETIC MEANFor a given set of observations, the AM may be defined as the sum of all the observations divided by the number of observations. Thus, if a variable x assumes n values x1 , x2 , x3 ,………..xn, then the AM of x, to be denoted by

In case of a simple frequency distribution relating to an attribute, we have

assuming the observation xi occurs fi times, i=1,2,3,……..n and N=≤fi . In case of grouped frequency distribution also we may use formula (15.1.2) with xi as the mid value of the i-th class interval, on the assumption that all the values belonging to the i-th class interval are equal to xi . However, in most cases, if the classification is uniform, we consider the following formula for the computation of AM from grouped frequency distribution:

Example : Compute the mean weight of a group of BBA students of St. Xavier’s College from the following data:

Applying, we get the average weight as

Example 3: Find the AM for the following distribution:

Solution: We apply formula since the amount of computation involved in finding the AM is much more compared to Example Any mid value can be taken as A. However, usually A is taken as the middle most mid-value for an odd number of class intervals and any one of the two middle most mid-values for an even number of class intervals. The class length is taken as C.Computation of AM 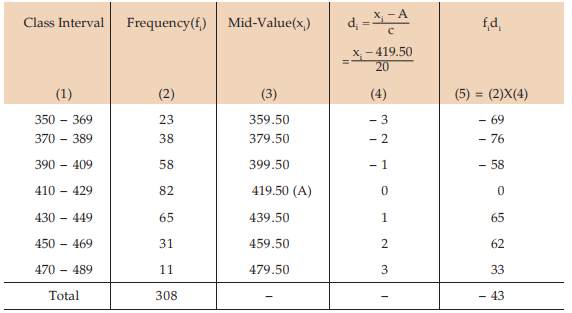 The required AM is given by

Example : Given that the mean height of a group of students is 67.45 inches. Find the missing frequencies for the following incomplete distribution of height of 100 students.

As given, we have 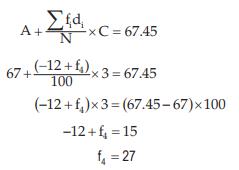 Thus, the missing frequencies would be 42 and 27.Properties of AM(i) If all the observations assumed by a variable are constants, say k, then the AM is also k. For example, if the height of every student in a group of 10 students is 170 cm, then the mean height is, of course, 170 cm.the algebraic sum of deviations of a set of observations from their AM is zero i.e. for unclassified data ,

and for grouped frequency distribution,

. Hence, the deviations of the observations from the AM i.e. )

For example, if it is known that two variables x and y are related by 2x+3y+7=0 and

, then the AM of y is given by

If there are two groups containing n1 and n2 observations and

as the respectivearithmetic means, then the combined AM is given by

MEDIAN – PARTITION VALUESAs compared to AM, median is a positional average which means that the value of the median is dependent upon the position of the given set of observations for which the median is wanted. Median, for a given set of observations, may be defined as the middle-most value when the observations are arranged either in an ascending order or a descending order of magnitude.As for example, if the marks of the 7 students are 72, 85, 56, 80, 65, 52 and 68, then in order to find the median mark, we arrange these observations in the following ascending order of magnitude: 52, 56, 65, 68, 72, 80, 85.Since the 4th term i.e. 68 in this new arrangement is the middle most value, the median mark is 68 i.e. Median (Me) = 68.As a second example, if the wages of 8 workers, expressed in rupees are56, 82, 96, 120, 110, 82, 106, 100 then arranging the wages as before, in an ascending order of magnitude, we get ₹ 56, ₹ 82, ₹ 82, ₹ 96, ₹ 100, ₹ 106, ₹ 110, ₹ 120. Since there are two middlemost values, namely, ₹ 96, and ₹100 any value between ₹96 and ₹100 may be, theoretically, regarded as median wage. However, to bring uniqueness, we take the arithmetic mean of the two middle-most values, whenever the number of the observations is an even number. Thus, the median wage in this example, would be

Solution: First, we find the cumulative frequency distribution which is exhibited in Computation of Median 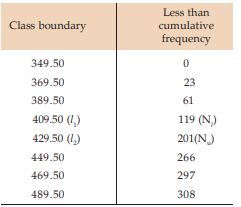 We find, from the Computation of Median

Example : Find the missing frequency from the following data, given that the median mark is 23. 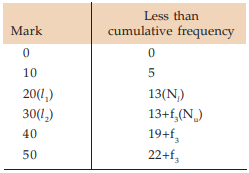 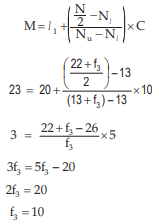 So, the missing frequency is 10.Properties of medianWe cannot treat median mathematically, the way we can do with arithmetic mean. We consider below two important features of median.(i) If x and y are two variables, to be related by y=a+bx for any two constants a and b, then the median of y is given byyme = a + bxmeFor example, if the relationship between x and y is given by 2x – 5y = 10 and if xme i.e. the median of x is known to be 16.Then 2x – 5y = 10

(ii) For a set of observations, the sum of absolute deviations is minimum when the deviations are taken from the median. This property states that

The symbols, except p, have their usual interpretation which we have already discussed while computing median and just like the unclassified data, we assign different values to p depending on the quartile.Another way to find quartiles for a grouped frequency distribution is to draw the ogive (less than type) for the given distribution. In order to find a particular quartile, we draw a line parallel to the horizontal axis through the point Np. We draw perpendicular from the point of intersection of this parallel line and the ogive. The x-value of this perpendicular line gives us the value of the quartile under discussion.Example : Following are the wages of the labourers: ₹ 82, ₹56, ₹ 90, ₹ 50, ₹ 120, ₹75, ₹ 75, ₹ 80, ₹130, ₹ 65. Find Q1 , D6 and P82 Solution: Arranging the wages in an ascending order, we get ₹50, ₹56,  ₹65,  ₹75, ₹75, `₹80, ₹82, ₹90, ₹120, ₹130.Hence, we have

Solution: This is a typical example of an open end unequal classification as we find the lower class limit of the first class interval and the upper class limit of the last class interval are not stated, and theoretically, they can assume any value between 0 and 500 and 1500 to any number respectively. The ideal measure of the central tendency in such a situation is median as the median or second quartile is based on the fifty percent central values. Denoting the first LCB and the last UCB by the L and U respectively, we construct the following cumulative frequency distribution:Computation of quartiles 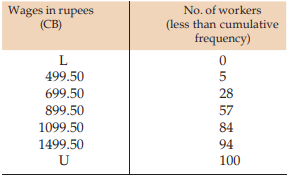 MODEFor a given set of observations, mode may be defined as the value that occurs the maximum number of times. Thus, mode is that value which has the maximum concentration of the observations around it. This can also be described as the most common value with which, even, a layman may be familiar with. Thus, if the observations are 5, 3, 8, 9, 5 and 6, then Mode (Mo) = 5 as it occurs twice and all the other observations occur just once. The definition for mode also leaves scope for more than one mode. Thus sometimes we may come across a distribution having more than one mode. Such a distribution is known as a multi-modal distribution. Bi-modal distribution is one having two modes. Furthermore, it also appears from the definition that mode is not always defined. As an example, if the marks of 5 students are 50, 60, 35, 40, 56, there is no modal mark as all the observations occur once i.e. the same number of times. We may consider the following formula for computing mode from a grouped frequency distribution: 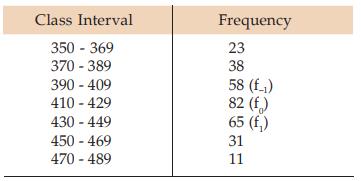 In connection with GM, we may note the following properties :(i) Logarithm of G for a set of observations is the AM of the logarithm of the observations; i.e.log G 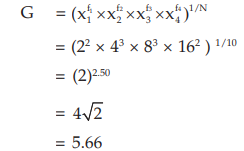 Harmonic MeanFor a given set of non-zero observations, harmonic mean is defined as the reciprocal of the AM of the reciprocals of the observation. So, if a variable x assumes n non-zero values x1 , x2, x3 ,……………,xn, then the HM of x is given by

For a grouped frequency distribution, we have

Properties of HM(i) If all the observations taken by a variable are constants, say k, then the HM of the observations is also k.(ii) If there are two groups with n1 and n2 observations and H1 and H2 as respective HM’s than the combined HM is given by

Example : Find the HM for the following data:

Solution: Using , we get

Relation between AM, GM, and HMFor any set of positive observations, we have the following inequality:AM ≥GM ≥HMThe equality sign occurs, as we have already seen, when all the observations are equal.Example : compute AM, GM, and HM for the numbers 6, 8, 12, 36.Solution : In accordance with the definition, we have

Example : Find the weighted AM and weighted HM of first n natural numbers, the weights being equal to the squares of the corresponding numbers.Solution: As given, 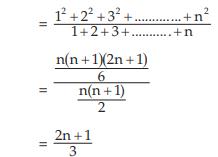 Example : Given two positive numbers a and b, prove that AH=G2. Does the result hold

for any set of observations?

Solution: For two positive numbers a and b, we have,

This result holds for only two positive observations and not for any set of observations.

Example : The AM and GM for two observations are 5 and 4 respectively. Find the two

Solution: If a and b are two positive observations then as given

Example : Find the mean and median from the following data:

Also compute the mode using the approximate relationship between mean, median and mode. 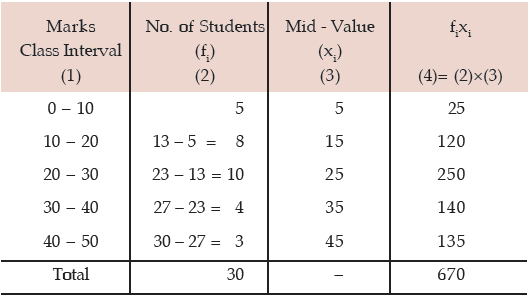 Hence the mean mark is given by 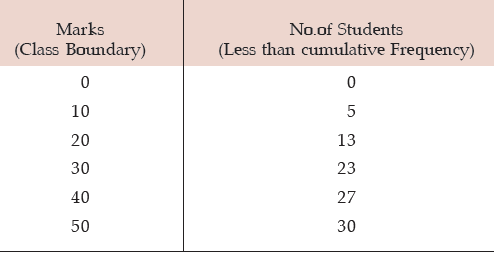 Example : Following are the salaries of 20 workers of a firm expressed in thousand

Where x i represents the amount of bonus paid to the ith salary group and fi, the number of employees belonging to that group which would be obtained on the basis of frequency distribution of salaries.Computation of Average bonus 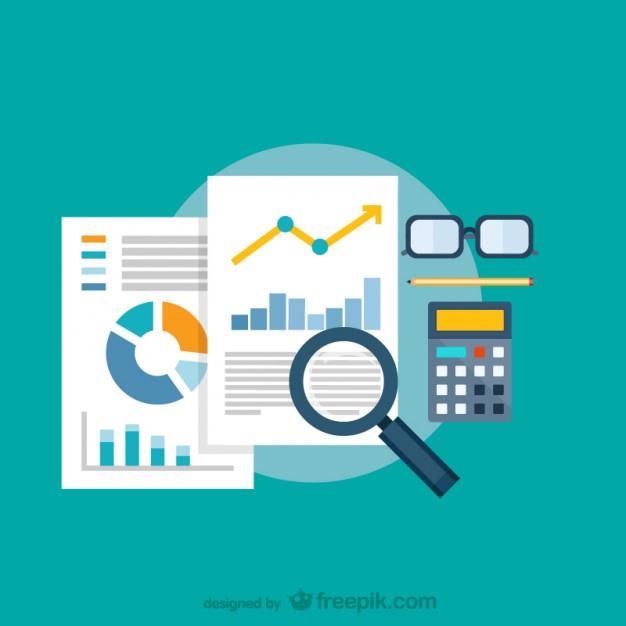