A rigid body in space has six degrees of freedom, three co-ordinates (x, y and z) to define rectilinear position and three parameters to define the angular positions. The constraints to the motion reduce the degee of freedom of the system. 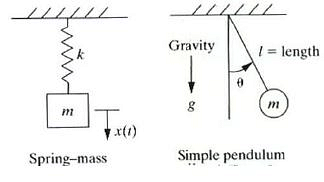 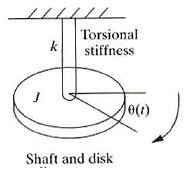 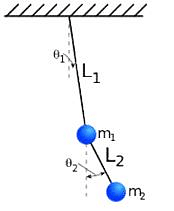 A. CLASSIFICATION OF VIBRATIONS

Classification Based on Exciting Force

1. Free Vibration : Vibrations in which after the initial displacement/velocity, no external forces act on the body and the vibration is maintained by the internal elastic forces is called Natural Vibration Eg : vibration in string, motion of pendulum

2. Forced Vibration : When a body vibrates under the influence of a continuous periodic disturbing internal or external force, then the body is said to be under forced vibration Eg : vibration in rotating engines

Classification Based on Direction of Motion

1. Longitudinal Vibration: When the particles of bar or disc move parallel to the axis of the shaft, then the vibrations are called longitudinal vibrations.

2. Transverse Vibration: When the particles of the bar or disc move approximately perpendicular to the axis of the shaft on either side in the transverse direction, then the vibrations are known as transverse vibrations.

3. Torsional Vibration: When the particles of the bar or disc get alternately twisted and untwisted on account of vibratory motion of suspended body, it is said to be undergoing torsional vibrations. 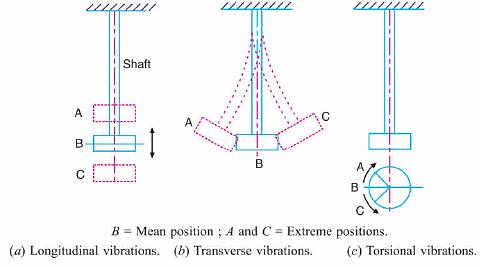 1. Damped Vibrations :The vibrations of a body whose amplitude goes on reducing over every cycle of vibrations are known as damped vibrations. This is due to the fact that a certain amount of energy possessed by the vibrating body is always dissipated in overcoming frictional resistance to the motion.

2. Resonance : When the frequency of external force is equal to the natural frequency of the vibrations, resonance takes place, amplitude or deformation or displacement will reach to its maximum at resonance and the system will fail due to breakdown. This state of disturbing force on the vibrating body is known as the state of resonance.

1. Periodic Motion : A motion which repeats itself at regular intervals of time is called a periodic motion. Eg – motion of pendulum, motion of planets around sun

2. Oscillatory Motion :If a body is moving back and forth repeatedly about a mean position, it is said to possess oscillatory motion. Eg - motion of the pendulum, vibrations of the string

1. Time Period :The time interval after which the motion is repeated itself is called time period. It is usually expressed in seconds.

2. Cycle :The motion completed during one time period is called cycle.

3. Frequency :The number of cycles executed in one second is called frequency. It is usually expressed in hertz (Hz).

4. Amplitude : The maximum displacement from the mean position is called the amplitude

Let P be the position of the particle at some instant after t sec from X. Therefore, angle turned by the particle

Projection of point P about the y-axis is given as

Differentiating with respect to time t 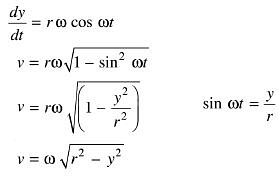 Similarly, the projection of the point P along the x-axis also satisfies the Simple Harmonic Motion.

Expressing it in the standard format

In this approach, the free undamped vibration of an object is modelled as mass-spring system.
Consider a compact mass m that slides over a frictionless horizontal surface. Suppose that the mass is attached to one end of a light horizontal spring of stiffness k whose other end is anchored in an immovable wall. 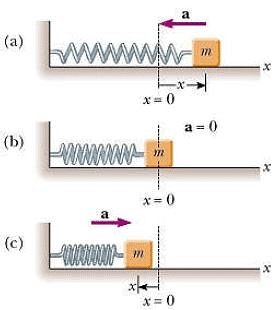 The following forces act on the system

1. Restoring Force of the spring due to its stiffness
2. The weight of the body
3. The normal reaction 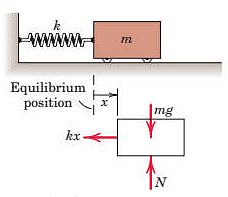 Since the system does not undergo vertical deflection, ΣFy = 0

Since the system vibrates along x axis

This equation is synonymous to the equation of motion of SHM. Hence, spring mass model can be considered as a body executing SHM with a natural frequency given by