Ques 1: Four thin rods each of mass m and length l are joined to make a square. Find moment of inertia of all the four rods about any side of the square.Ans:

Ques 4: Find the moment of inertia of a uniform square plate of mass M and edge a about one of its diagonals.Ans:

Ques 6: Two point masses m1 and m2 are joined by a weightless rod of length r. Calculate the moment of inertia of the system about an axis passing through its centre of mass and perpendicular to the rod.Ans:

Substituting the values we get,

Ques 7: Linear mass density (mass/length) of a rod depends on the distance from one end (say λ) as λx = (αx + b). Here, α and β are constants. Find the moment of inertia of this rod about an axis passing through A and perpendicular to the rod. Length of the rod is l.Ans:

Angular VelocityQues 8: Find angular speed of second's clock.Ans: In second's clock, it takes 60 s by the seconds hand to rotate by 2π.So,

Find its angular velocity about origin at this instant.Ans:

Ques 10: Particle P shown in figure is moving in a circle of radius R = 10cm with linear speed v = 2m/s. Find the angular speed of particle about point O.

Ques 11: Two points P and Q, diametrically opposite on a disc of radius R have linear velocities v and 2v as shown in figure. Find the angular speed of the disc.

Ques 15: Point C is the centre of mass of the rigid body shown in figure. Find the total torque acting on the body about point C. 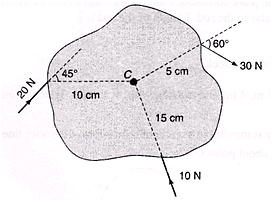 Ques 18: A wheel starting from rest is uniformly accelerated with a = 2 rad/s2 for 5 s. It is then allowed to rotate uniformly for the next two seconds and is finally brought to rest in the next 5 s. Find the total angle rotated by the wheel.
Ans: θ = θ1 + θ2 + θ3

is the torque due to friction. Again,

Ques 21: A uniform disc of mass 20 kg and radius 0.5 m can turn about a smooth axis through its centre and perpendicular to the disc. A constant torque is applied to the disc for 3 s from rest and the angular velocity at the end of that time is 240/π rev/min. Find the magnitude of the torque. If the torque is then removed and the disc is brought to rest in t seconds by a constant force of 10 N applied tangentially at a point on the rim of the disc, find t.
Ans:

Q 22.   A uniform disc of mass m and radius R is rotated about an axis passing through its centre and perpendicular to its plane with an angular velocity w0. It is placed on a rough horizontal plane with the axis of the disc keeping vertical. Coefficient of friction between the disc and the surface is m.
Find:
(a) the time when disc stops rotating,
(b) the angle rotated by the disc before stopping.
Ans:

Non-uniform angular acceleration
Ques 23:A flywheel whose moment of inertia about its axis of rotation is 16 kg-m2 is rotating freely in its own plane about a smooth axis through its centre. Its angular velocity is 9 rad s-1 when a torque is applied to bring it to rest in t0 seconds. Find t0 if:
(a) the torque is constant and of magnitude of 4 Nm,
(b) the magnitude of the torque after t seconds is given by kt.
Ans:

Ques 25: The angular velocity of a gear is controlled according to ω = 12 - 3t2 where ω, in radian per second, is positive in the clockwise sense and t is the time in seconds. Find the net angular displacement Δθ from the time t = 0 to t = 3 s. Also, find the number of revolutions N through which the gear turns during the 3s.
Ans:

Ques 26: A solid body rotates about a stationary axis according to the law q = at - bt3, where a = 6 rad/s and b = 2 rad/s3. Find the mean values of the angular velocity and acceleration over the time interval between t = 0 and the time, when the body comes to rest.
Ans:

Ques 27: A particle of mass 1 kg is moving along a straight line y = x + 4. Both x and y are in metres. Velocity of the particle is 2 m/s. Find magnitude of angular momentum of the particle about origin.
Ans:

Ques 28: A uniform rod of mass m is rotated about an axis passing through point O as shown. Find angular momentum of the rod about rotational axis.

Ques 29: A solid sphere of mass m and radius R is rolling without slipping as shown in figure. Find angular momentum of the sphere about z-axis.

Ques 30: A rod of mass m and length 2R is fixed along the diameter of a ring of same mass m and radius R as shown in figure. The combined body is rolling without slipping along x-axis. Find the angular momentum about z-axis.

Conservation of Angular Momentum
Ques 31: If radius of earth is increased, without change in its mass, will the length of day increase, decrease or remain same?
Ans: As Iω = constant ⇒ T ∝ I.
With increase in R, I increases and so is T. So, length of day will increase.

Ques 33: A horizontal disc rotating freely about a vertical axis makes 100 rpm. A small piece of wax of mass 10 g falls vertically on the disc and adheres to it at a distance of 9 cm from the axis. If the number of revolutions per minute is thereby reduced to 90. Calculate the moment of inertia of disc.
Ans:

Q 34.   A man stands at the centre of a circular platform holding his arms extended horizontally with 4 kg block in each hand. He is set rotating about a vertical axis at 0.5 rev/s. The moment of inertia of the man plus platform is 1.6 kg-m2, assumed constant. The blocks are 90 cm from the axis of rotation. He now pulls the blocks in toward his body until they are 15 cm from the axis of rotation.
Find (a) his new angular velocity and (b) the initial and final kinetic energy of the man and platform, (c) how much work must the man do to pull in the blocks ?
Ans:

Ques 35: A horizontally oriented uniform disc of mass M and radius R rotates freely about a stationary vertical axis passing through its centre. The disc has a radial guide along which can slide without friction a small body of mass m. A light thread running down through the hollow axle of the disc is tied to the body. Initially the body was located at the edge of the disc and the whole system rotated with an angular velocity w0. Then, by means of a force F applied to the lower end of the thread the body was slowly pulled to the rotation axis. Find:
(a) the angular velocity of the system in its final state,
(b) the work performed by the force F.
Ans:
(a)

Ques 36: Consider a cylinder of mass M and radius R lying on a rough horizontal plane. It has a plank lying on its top as shown in figure. A force F is applied on the plank such that the plank moves and causes the cylinder to roll. The plank always remains horizontal. There is no slipping at any point of contact. Calculate the acceleration of the cylinder and the frictional forces at the two contacts. 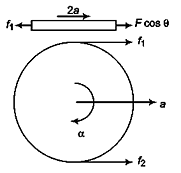 Ques 37: Find the acceleration of the cylinder of mass m and radius R and that of plank of mass M placed on smooth surface if pulled with a force F as shown in figure. Given that sufficient friction is present between cylinder and the plank surface to prevent sliding of cylinder.

Ques 38: In the figure shown a force F is applied at the top of a disc of mass 4 kg and radius 0.25 m. Find maximum value of F for no slipping

(a) minimum coefficient of friction for pure rolling to take place.
(b) If μ > μmin, find linear acceleration of sphere.
(c) If

, find linear acceleration of cylinder. Here, μmin is the value obtained in part (a).
Ans:

(a) For minimum value of μ,

Angular Impulse
Ques 40: A uniform rod AB of length 2l and mass m is rotating in a horizontal plane about a vertical axis through A, with angular velocity ω, when the mid-point of the rod strikes a fixed nail and is brought immediately to rest. Find the impulse exerted by the nail.
Ans:

Ques 41: A uniform rod of length L rests on a frictionless horizontal surface. The rod is pivoted about a fixed frictionless axis at one end. The rod is initially at rest. A bullet travelling parallel to the horizontal surface and perpendicular to the rod with speed v strikes the rod at its centre and becomes embedded in it. The mass of the bullet is one-sixth the mass of the rod.
(a) What is the final angular velocity of the rod ?
(b) What is the ratio of the kinetic energy of the system after the collision to the kinetic energy of the bullet before the collision ?
Ans: 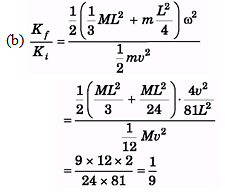 Ques 42: A uniform rod AB of mass 3m and length 2l is lying at rest on a smooth horizontal table with a smooth vertical axis through the end A. A particle of mass 2m moves with speed 2m across the table and strikes the rod at its mid-point C. If the impact is perfectly elastic. Find the speed of the particle after impact if:
(a) it strikes the rod normally,
(b) its path before impact was inclined at 60° to AC.
Ans: