Ques 4: A man standing on a platform holds weights in his outstretched arms. The system is rotated about a central vertical axis. If the man now pulls the weights inwards close to his body, then(a) the angular velocity of the system will increase(b) the angular momentum of the system will remain constant(c) the kinetic energy of the system will increase(d) All of the aboveAns: (d)Solution: In pulling hands closes, external torque is zero, so angular momentum remains constant. Due to decrease in moment of inertia, angular velocity increases and KE increases.Ques 5: The moment of inertia of a uniform semicircular disc of mass M and radius rabout a line perpendicular to the plane of the disc through the centre is(a) Mr2(b) 1/2Mr2(c) 1/4Mr2(d)2/5Mr2Ans: (b)Ques 6: Two bodies A and B made of same material have the moment of inertial in the ratio IA : IB = 16 : 18. The ratio of the masses mA : mB is given by  (a) cannot be obtained(b) 2:3(c) 1 : 1(d) 4 : 9Ans: (a)Solution: Masses cannot be compared as distribution is not given.Ques 7: When a sphere rolls down an inclined plane, then identity the correct statement related to the work done by friction force(a) The friction force does positive translational work(b) The friction force does negative rotational work(c) The net work done by friction is zero(d) All of the aboveAns: (c)Solution:As the displacement of point of contact is zero, so work done by friction is zero.Ques 8: A circular table rotates about a vertical axis with a constant angular speed w. A circular pan rests on the turn table (with the centre coinciding with centre of table) and rotates with the table. The bottom of the pan is covered with a uniform thick layer of ice which also rotates with the pan. The ice starts melting. The angular speed of the turn table(a) remains the same(b) decreases(c) increases(d) may increase or decrease depending on the thickness of ice layerAns: (b)Solution: Due to melting of ice, water spreads on outer side of the pan, increasing moment of inertia, which leads to a decrease in angular speed due to conservation of angular momentumQues 9: If R is the radius of gyration of a body of mass M and radius r, then the ratio of its rotational to translational kinetic energy in the rolling condition is

⇒ v = constant, irrespective of the inclination, but time is different because of different acceleration due to different inclinationQues 11: For the same total mass which of the following will have the largest moment of inertia about an axis passing through the centre of mass and perpendicular to the plane of the body(a) a disc of radius R(b) a ring of radius R(c) a square lamina of side 2R(d) four rods forming a square of side 2i?Ans: (d)Solution: Moment of inertia is maximum, when masses are at maximum distance from axis.Ques 12: A disc and a solid sphere of same mass and radius roll down an inclined plane. The ratio of the friction force acting on the disc and sphere is

Ques 13: A horizontal disc rotates freely with angular velocity w about a vertical axes through its centre. A ring, having the same mass and radius as the disc, is now gently placed coaxially on the disc. After some time, the two rotate with a common angular velocity. Then

Ques 16: A solid sphere rolls without slipping on a rough horizontal floor, moving with a speed v. It makes an elastic collision with a smooth vertical wall. After impact,(a) it will move with a speed v initially(b) its motion will be rolling with slipping initially and its rotational motion will stop momentarily at some instant(c) its motion will be rolling without slipping only after some time(d) All of the aboveAns: (d)Solution:  Due to elastic collision, velocity will reverse and not angular velocity, so it will take some time to again settle to uniform rolling. During this time there will be sliping and its rotation will stop for a moment.Ques 17: The figure shows a square plate of uniform mass distribution. AA' and BB' are the two axes lying in the plane of the plate and passing through its centre of mass. It Io is the moment of inertia of the plate about A A' then its moment of inertia about the BB' axis is

is same for AA' and BB'.Ques 18: A spool is pulled horizontally on rough surface by two equal and opposite forces as shown in the figure. Which of the following statements are correct?

It then falls and sticks to the bottom disc. The change in the rotational kinetic energy of the system is

Ques 21: A rod of uniform cross-section of mass M and length I is hinged about an end to swing freely in a vertical plane. However, its density is non uniform and varies linearly from hinged end to the free end doubling its value. The moment of inertia of the rod, about the rotation axis passing through the hinge point is

Ques 22: Let I1 and I2 be the moment of inertia of a uniform square plate about axes shown in the figure. Then the ratio I1 : I2 is

Ques 23: Moment of inertia of a uniform rod of length L and mass M, about an axis passing through L/ 4 from one end and perpendicular to its length is 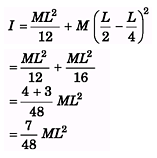 Ques 24: A uniform rod of length L is free to rotate in a vertical plane about a fixed horizontal axis through B. The rod begins rotating from rest. The angular velocity ω at angle θ is given as

Ques 25: Two particles of masses 1 kg and 2 kg are placed at a distance at a distance of 3m. Moment of inertia of the particles about an axis passing through their centre of mass and perpendicular to the line joining them is (in kg-m2).(a) 6(b) 9(c) 8(d) 12Ans: (a)Solution:

Substituting the values we get,

Ques 26: Find moment of inertia of a thin sheet of mass M in the shape of an equilateral triangle about an axis as shown in figure. The length of each side is L

Ques 27: A square is made by joining four rods each of mass M and length L. Its moment of inertia about an axis PQ, in its plane and passing through one of its corner is

Ques 28: A thin rod of length 4l, mass 4 m is bent at the points as shown in the figure. What is the moment of inertia of the rod about the axis passing through O and perpendicular to the plane of the paper?

Ques 29: The figure shows two cones A and B with the conditions : hA < hB; rA > rB; RA = RB ; mA = mB. Identify the correct statement about their axis of symmetry.

Ques 30: Linear mass density of the two rods system, AC and CB is x. Moment of inertia of two rods about an axis passing through AB is